Rolling Stone - In 2018, while reporting from the Flat Earth International Conference in Colorado, I met a man who’d towed a rocket ship into a hotel conference room. He was Mike Hughes, an amateur rocket stuntman and vocal champion of Flat Earth theory. He hoped to launch himself into space to take a photograph that would prove once and for all whether Earth was a globe, or a flat disc.

Though the answer might seem obvious to the vast majority of globe-dwellers, a small but committed movement of conspiracy theorists believes Earth is not a sphere but a great, celestial Frisbee contained within a dome. I spent years within this movement while reporting my book Off The Edge: Flat Earthers, Conspiracy Culture, and Why People Will Believe Anything. At first I believed the theory to be weird, even occasionally funny. Then in February 2020, it turned deadly serious. That month, Mike Hughes died while trying to ride his homemade rocket thousands of feet into the atmosphere. He was among a collective of conspiracy theorists pushing their inquiries to life-threatening extremes.

This story is a couple of years old, but I know there's a good amount of people unfamiliar with it, and probably more people who are, who would be interested in picking this book up because as crazy as these people are, they are insanely fascinating.

Here is the video from Mad Mike's homemade rocket launch. Don't worry, it cuts out just before impact so it's not graphic.

This video shows the lengths flat-earthers will go to to "disprove" the theory they believe has been shoved down our throats since the time of Galileo.

Who knows, they don't really say. But many believe it's a worldwide government conspiracy to keep "us" from finding out that the world ends at Antarctica. They believe there is a thousand-foot ice wall (like Game Of Thrones) and that the government doesn't let people go there because they don't want us to know about it.

A highly recommended doc on the entire subject and segment of people is "Behind The Curve" on Netflix.

Back to the book.

Here is an excerpt via Rolling Stone -

The rocket took off like a punctured balloon, wobbly and erratic. A jagged trail of steam traced the ship’s path across the sky, up thousands of feet above the California desert. For a moment, the rocket seemed to hover, oblivious to gravity.

Then the inevitable descent. To onlookers on the ground, the ship and the man inside it were a blur of black.

“Pull it, Mike,” another man shouted. But the parachutes that had bloomed above Mike Hughes on his previous death-defying rocket launches were nowhere to be seen. “Pull it! Pull it! Oh God.”

Hughes’s rocket crashed into the dust with absolute finality. There was no need to call an ambulance.

Until that moment, Hughes had been one of the most famous living Flat Earthers. He had earned his fame by taking the theory to its logical conclusion. He was going to build a rocket ship, blast into Earth’s upper reaches, and see for his own eyes whether the horizon was flat or curved. “This space launch is to prove or disprove the Flat Earth,” he told me in spring 2019.

I thought it was a terrible idea. I suggested, much too gently, that it was a terrible idea. I thought it was such a terrible idea that I wrote a chapter about Hughes and the cadre of conspiracy theorists attempting dangerous stunts to prove their beliefs. I titled the chapter “Someone Is Going to Die for No Reason.” Then I dropped the matter and never raised it to him again. Hughes was 64 at the time and didn’t need my advice, I reasoned. Besides, I doubted he’d really attempt the launch. For the past year, he’d notified me of various complications: parachute malfunctions and unforeseen weather that delayed his project. I began to suspect he was searching for excuses, avoiding a dangerous stunt that would force him to confront the curved horizon. I was wrong about his convictions. On Feb. 22, 2020, in a gray stretch of desert, Hughes joined the growing ranks of conspiracy-theory casualties, and I’ve had to live with that scrapped chapter title on my conscience ever since.

In the mid-1840s, when Samuel Rowbotham popularized Flat Earth as a “zetetic” science, he preached that zetetics should believe only what they could personally observe. Rowbotham was a fraud, routinely borrowing and often even misrepresenting real scientists’ work when it suited him. But Hughes, with his insistence on seeing the world for himself, was one of the truest zetetics I’ve ever known.

When his pit-crew gigs dried up like his racing career, Hughes started driving a limousine, and chasing thrills as a freelance stuntman on the side. While trying to outdo a famous stunt by daredevil Evel Knievel, Hughes began tinkering with homemade rockets, which could propel him on long horizontal jumps off ramps. One stunt led to the next. If he could launch across a river, he thought, then perhaps he could break the record for vertical height in a homemade rocket. He toppled that record, then broke his own record on a subsequent launch, inching upward each time until his dreams became a list of altitudes.

“I don’t believe in science,” he told reporters in November 2017. “I know about aerodynamics and fluid dynamics and how things move through the air, about the certain size of rocket nozzles and thrust. But that’s not science, that’s just a formula. There’s no difference between science and science fiction.”

The story goes on to describe the first of a handful of attempts that Hughes made to blast himself into space so that he could snap his own picture of the Earth being flat. (Because he believed all the pictures from "space" we have been shown are doctored and photoshopped.) 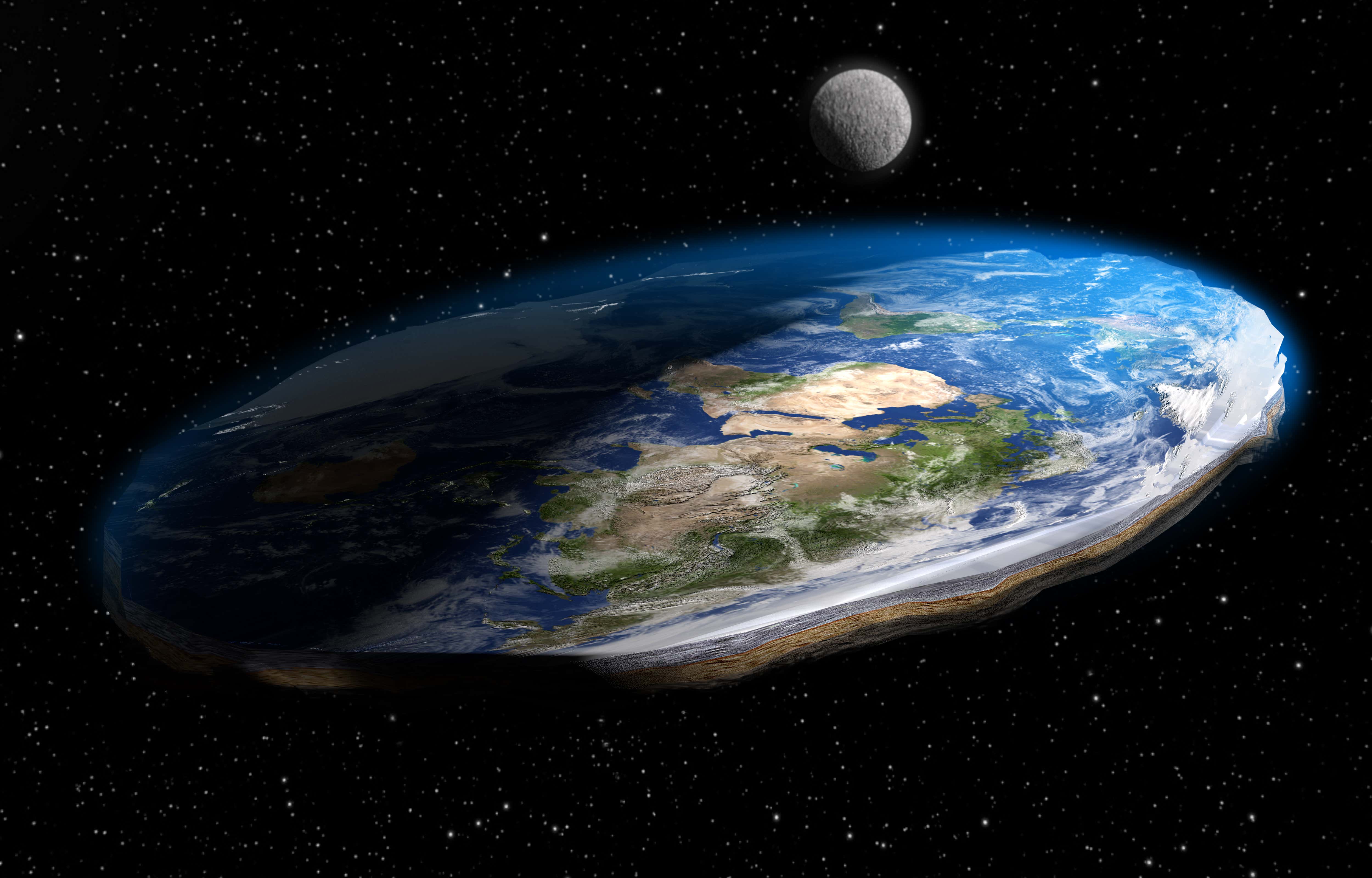 Dude just get in a hot air balloon. They exist!

Hughes had intended the launch to take him only eighteen hundred feet in the air, much too low to observe the planet’s curvature. Still, he managed to fundraise more than $7,000 online from Flat Earthers — and from people who thought his project was a big joke. They almost funded a tragedy. Short on cash, Hughes built the rocket in his garage and converted an old mobile home into a launch ramp. Then he hauled the whole thing to Amboy, a windswept California ghost town with a history of bad karma: stories of hauntings and occult rituals and bloody motel rooms. Other towns with legitimate governments had turned Hughes away, unwilling to deal with the headache of a potential rocket catastrophe. But Amboy, a popular filming location for horror movies, was virtually a theme park for destruction, and its owner welcomed Hughes for what was nearly another nightmare. 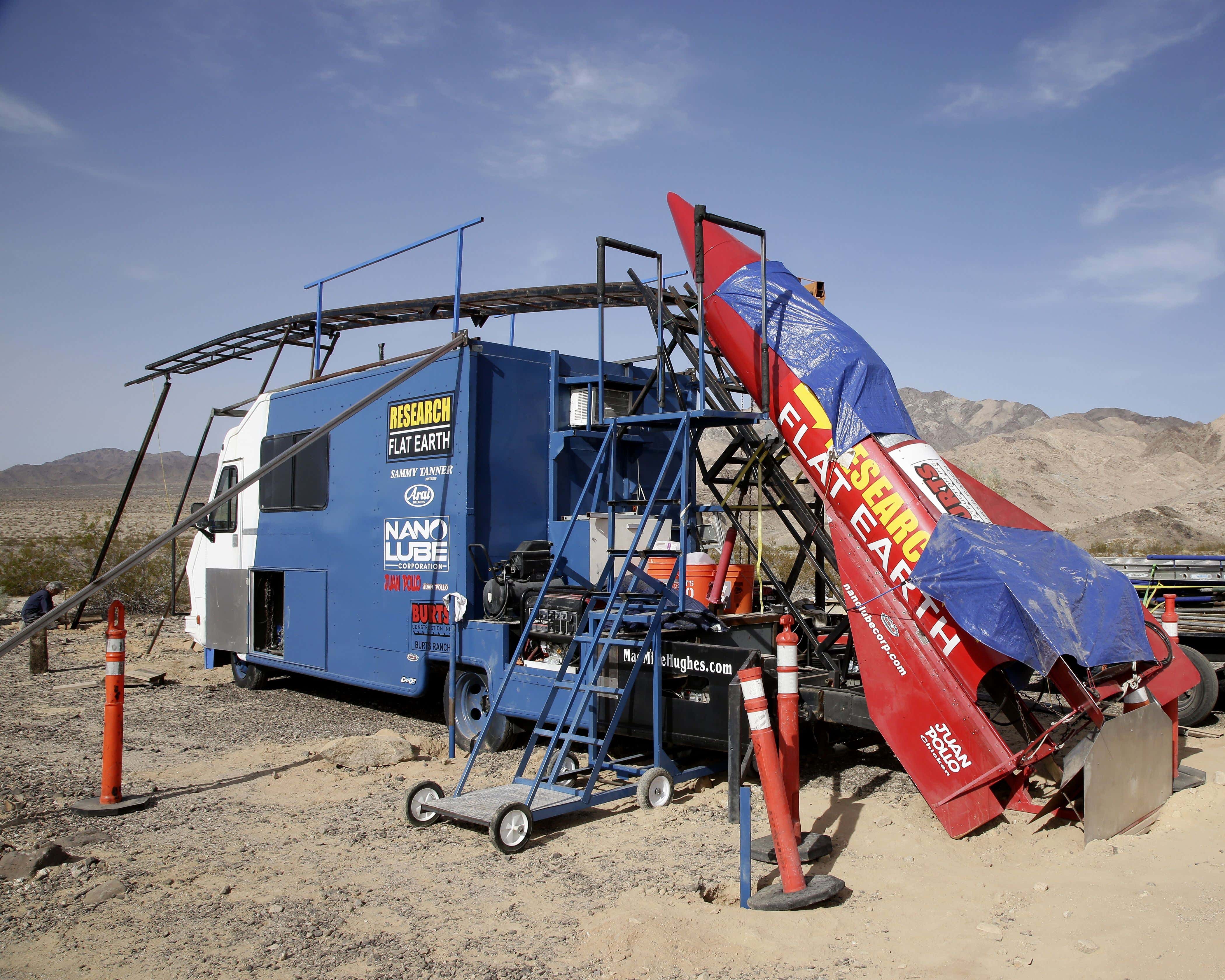 As he approached his rocket (emblazoned with research flat earth), Hughes noticed a hissing noise, like an air mattress deflating. The noise was a vapor leak, but after the trip to Amboy and the makeshift launch-ramp assembly, no one knew how long the rocket had been compromised, which would determine how dangerous it would be. “We don’t know if it’s been going for five minutes or five hours,” Hughes told me. A friend who had helped with his rocket construction urged him to wait, telling him they could fix the problem, if Hughes was willing to postpone.

“I said ‘You know what, I’m not waiting any longer. I got in, and I did it,” Hughes told me. His secondhand parachutes were 23 and 21 years old. “I didn’t even know if they were going to work. They were all I could afford.”

He almost died several times before he finally did on this last attempt.

For more on this story check out the book OFF THE EDGE: Flat Earthers, Conspiracy Culture and Why People Will Believe Anything by Kelly Weill. Out Feb 22. Available now for pre-order.

p.s. - Michael Angelo and I have been kicking around the idea of starting a monthly "Barstool Book Club" where we each select a book, either from personal taste, or suggested by you guys. We'd also ask other bloggers and people at Barstool to suggest their favorites. End of the month we get together, go over them on a quick pod, nice little blog write-up. Bada boom bada bing. I think there's an audience for this but maybe I'm nuts? Let us know your thoughts.