This is it. This is the final step in Matthew Stafford's career. I don't care about arguing whether or not he belongs in the Hall of Fame. That's not the point. The final step was the world finally seeing him get to be drunk as shit at the parade. This man was MADE for this life. There's a reason he had/has the nickname Frat Stafford.

The man went to Georgia in the mid-late 2000s. You could argue it was the golden era for being the starting QB and future No. 1 pick at an SEC school. Minimal cell phone activity. Only had Facebook around for social media. The man partied and the man can put down alcohol. He's now 34 and finally winning playoff games. That's why you can see the moment he goes from drunk to oh yeah this man is fucking drunk after the sip here. 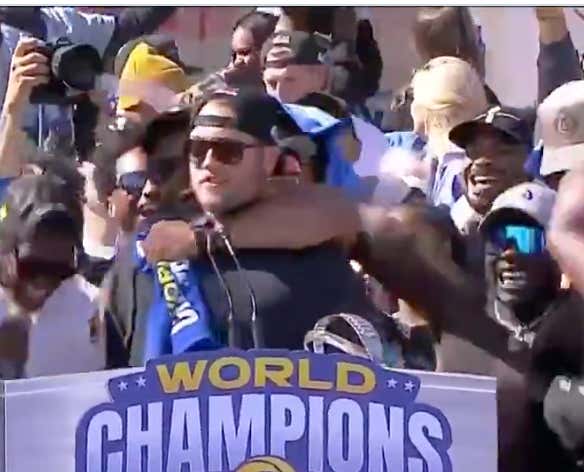 That grin says it all. That's a man who is going to deal with a 2-day hangover since he's over the age of 27. I don't care if you're a professional athlete or working inside sales. The moment that hits, you know for two days you're feeling it. Good for Stafford. Hope he keeps the party going all night. Can't be falling asleep at like 5pm out there on parade day.