Somewhere in a cold New England town, Patrick McGillicuddy is puking his guts out at this turnout. But I can't even get mad at the dozens of Rams fans that didn't make it out to greet their team today. I was only in LA for about 60 hours last week to get DOZEN SPOILERS slowly gutted in a trivia match.

But I completely understand why LA fans are the way they are. The weather is awesome, the traffic is horrific, and the city is sooooooo fucking sprawling. It can't be easy to go from the 405 to the 101 to the (insert some other stupid number) at this time of day just to greet your Super Bowl heroes that arrived a couple of years ago. Besides, what's the point of going to a parade when you have big sports town vibes like this on your biggest landmark in a place known for creating the greatest visual effects?

God dammit, Cincinnati would have been a fucking zoo today considering this is what Cleveland looked like when Browns went 0-16.

Rams fans may be taking some shit today for having as many people on the entire parade route as I saw in one block of New York during the 2007 Giants parade. But I gotta tip my cap to Les Snead for not only assembling a Super Bowl roster but also an A+ parade shirt.

While Aaron Donald went the JR Smith route, if JR Smith got hit by the same gamma rays as The Hulk.

UPDATE 2: Looks like we found a solid pack of Rams fans, even though I think this is what happens in LA anytime someone plays any hit from Dr. Dre's catalog in public.

If the NFL is truly a copycat league, draft picks are about to be traded for veterans like it's a Madden Franchise League.

Anyway, no matter what you think of the Rams, LA, or Los Angelesians(?), I think we are all happy that Rams superfan Joe Covid could see an LA Rams Super Bowl before he died. 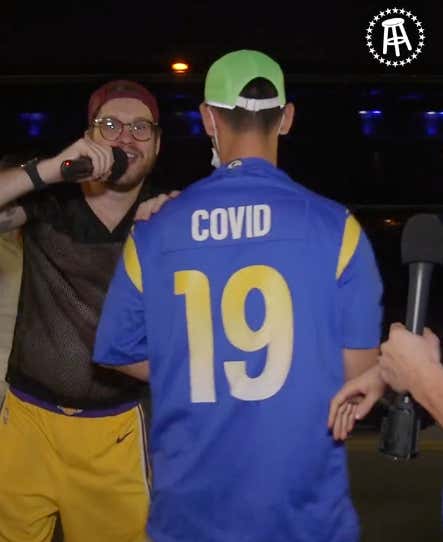