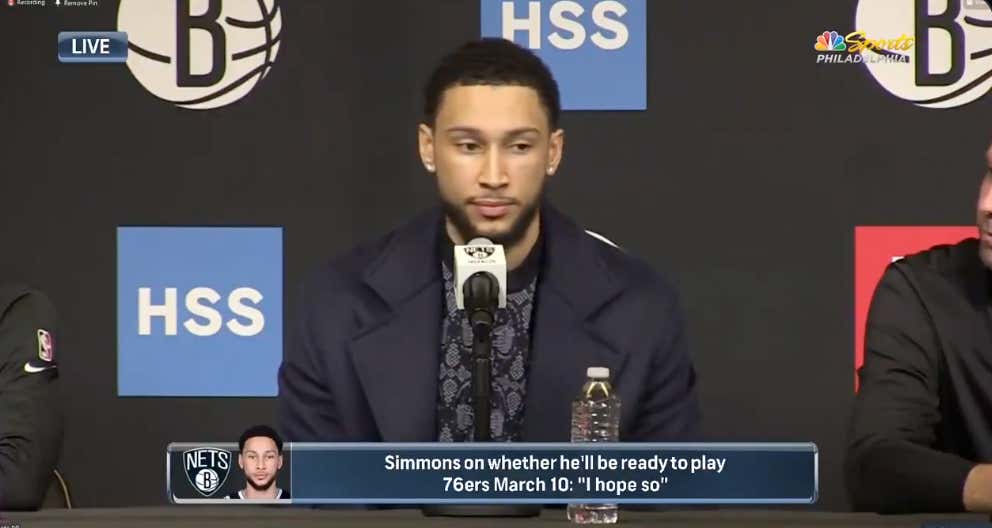 Ben Simmons held his introductory press conference today in Brooklyn. The thing with these press conferences is that nothing important ever actually gets said. All of these responses are carefully crafted by PR teams. Press conferences in general typically suck, but especially when the PR nerds have a few extra days to make sure they script each and every answer.

With that being said, we did get a few good moments from Ben's introduction in Brooklyn. Firstly, he mentioned that wanting out of Philly didn't have anything to do with fans or coaches or other players. Which is great to see that despite having this much time away from basketball, he's still able to lie at an elite level.

Next up, Ben was asked if he'd be ready to go for when the Brooklyn Nets make the trip down 95 to play against the Sixers on March 10th. His response, "I hope so".

Now I'd still say the chances that Ben Simmons actually ever plays another game in Philadelphia again are none to absolutely none. He can't admit that in a press conference and he can't have a quote out there that says "I am absolutely terrified of going within 50 miles of that city again", so the "I hope so" was just non-committal enough to get away with. But if somehow and some way Ben Simmons was being truthful with that statement and he actually hopes to play on March 10th? Well then he's probably going to lose a bit of sleep leading up to that game after his decision to not talk to Joel on his way out.

Yikes. If he's that afraid to even speak with Joel after finally getting traded, I can only imagine how exacerbated that feeling of dread and doom would be when he has to line up across from him on Joel's home court. If he actually hopes to be ready to play on March 10th, then he is actively rooting for himself to get dunked into Bolivian by the MVP. More or less.

Again, pretty much everything we heard today out of Ben Simmons was at least some degree of bullshit scripted by Klutch. So none of it actually matters. But if he's really suiting up in a few weeks, well I just hope you get to your local Wendy's before Frosty's go extinct.