This is the story of Wild Bill's last stand. A character crafted from the spirit of the open sky and wild plains, he met his match in the Mojave. (Wild Bill was an excuse for me to wear a cowboy hat and boots and act irrationally, It was fun while it lasted but not sustainable). In the days following Wild Bill's crossing of the continental U.S, He grew restless. (I am going to talk about Wild Bill in the 3rd person). The road once again called. LA wasn't Bill's type of town. He had been invited to go clubbing with Bryce Hall's crew in LA but definitely made the right decision by not doing that. This wasn't a dig at these people, Wild Bill just likes roadside bars and the open sky. Dark clubs with no conversation wasn't Wild Bill's scene. Also, most of what happens at the Saddle Ranch (Tik Tokker bar Barstool was holding live shows) is every Tik Tokker (mid-tier as well as the big guys) would yell at every female fan who approached them for their ID to check their age. It was the weirdest experience of seeing a bunch of pretty nonimpressive people running around a bar acting like they all were hot shit. Like a lot of them were mid-tier Tik Tokkers, not Bryce Hall, Josh Richards, Or Addison Rae, but acted like they were just as much hot shit. Wild Bill found it interesting to sort of being a fly on the wall in that bar from an anthropological standpoint. This group of people all became famous in the most modern way within short clips of dancing. It was a phenomenon society had never seen, and there Wild Bill was watching the small group of people interacting, taking Tik Toks, and doing stuff that would look alien to someone from 2018. It was honestly fascinating, you could honestly do a novel just rolling with the Tik Tok crowd Hunter S. Thompson style (A lot less dangerous). But instead of staying the weekend and being part of the societal rot in LA, when the rest of the fellas headed to Lousiana, Wild Bill had to get out of town.

As soon as the opportunity arose, Wild Bill got back on the road (Did you know flights from LA to LV are legit like $30) and met up with some buddies in the City of Sin. After cruising around Vegas (This was when he actually got back into a car). Wild Bill had made enough friends at the $5 dollar blackjack tables with the Wheels Spins (Honestly playing BlackJack at the Horseshoe was awesome, you get blackjack you get to spin a wheel at a chance at the Jackpot). I think every politician should have to play blackjack at a bunch of the casinos in downtown Vegas. I met people from every walk of life, sat at tables with people of very different backgrounds, but all of them worked together to beat the dealer and high fiving and vibing the whole time. After a night or two in Vegas, it was time for wild Bill to head out.

With a wad of cash in his pocket (Hit black 17 on roulette) he once again hit the road and decided to drive to one of America's greatest destinations. The Grand Canyon. Wild Bill took the road more traveled on the way to the canyon.

The road there was uneventful besides a detour to a Culvers, which is Wild Bill's favorite fast-food restaurant that he thought could only be found in the midwest. Had to make a quick stop. 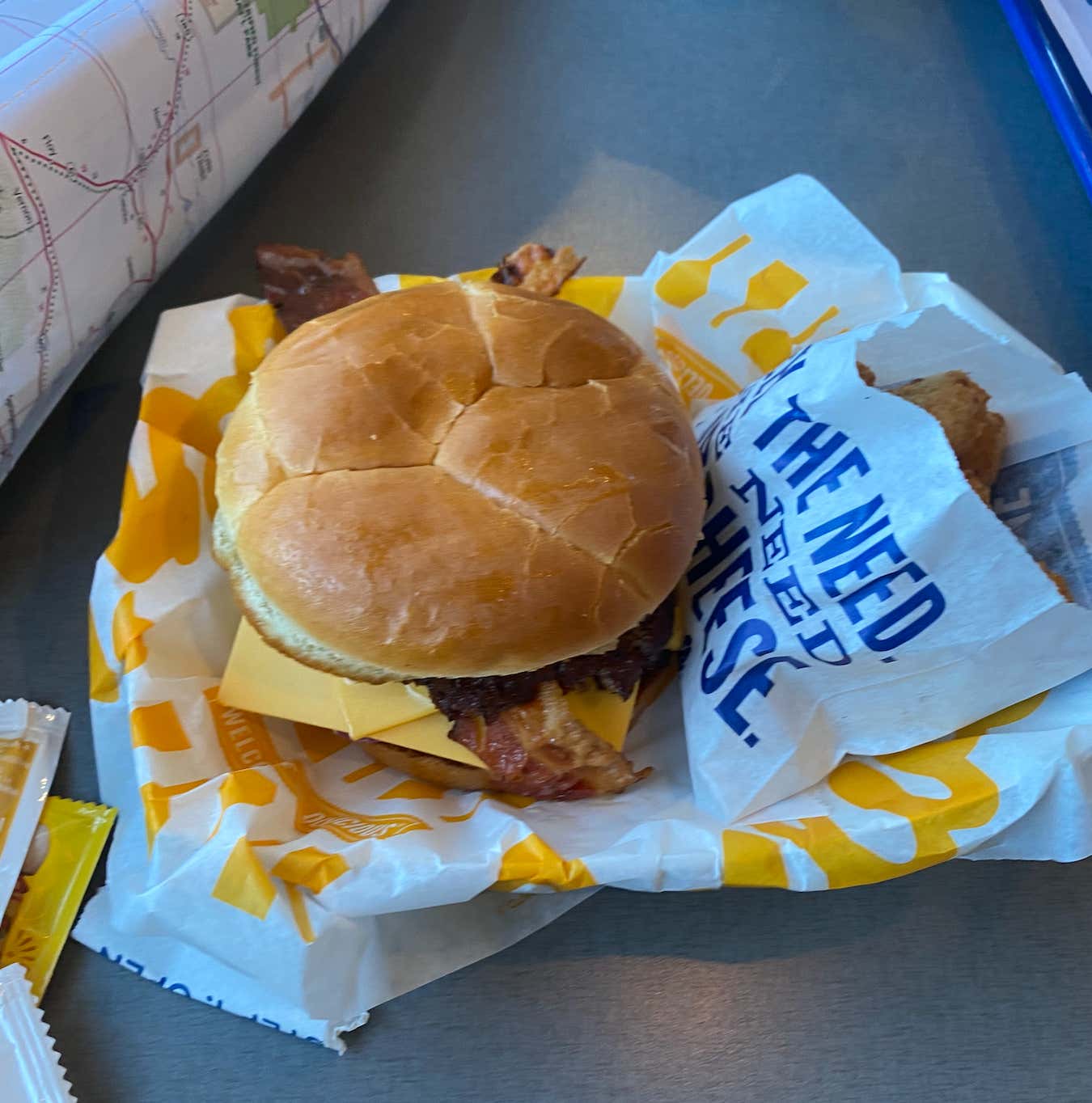 We got to the Grand Canyon at nightfall. There is nothing to do around the Grand Canyon, so our plan was to chill out and not waste money on a hotel and wait for the sunrise. The sunrise over the Canyon was amazing. A religious experience. The sun made the landscape look like an ancient temple. 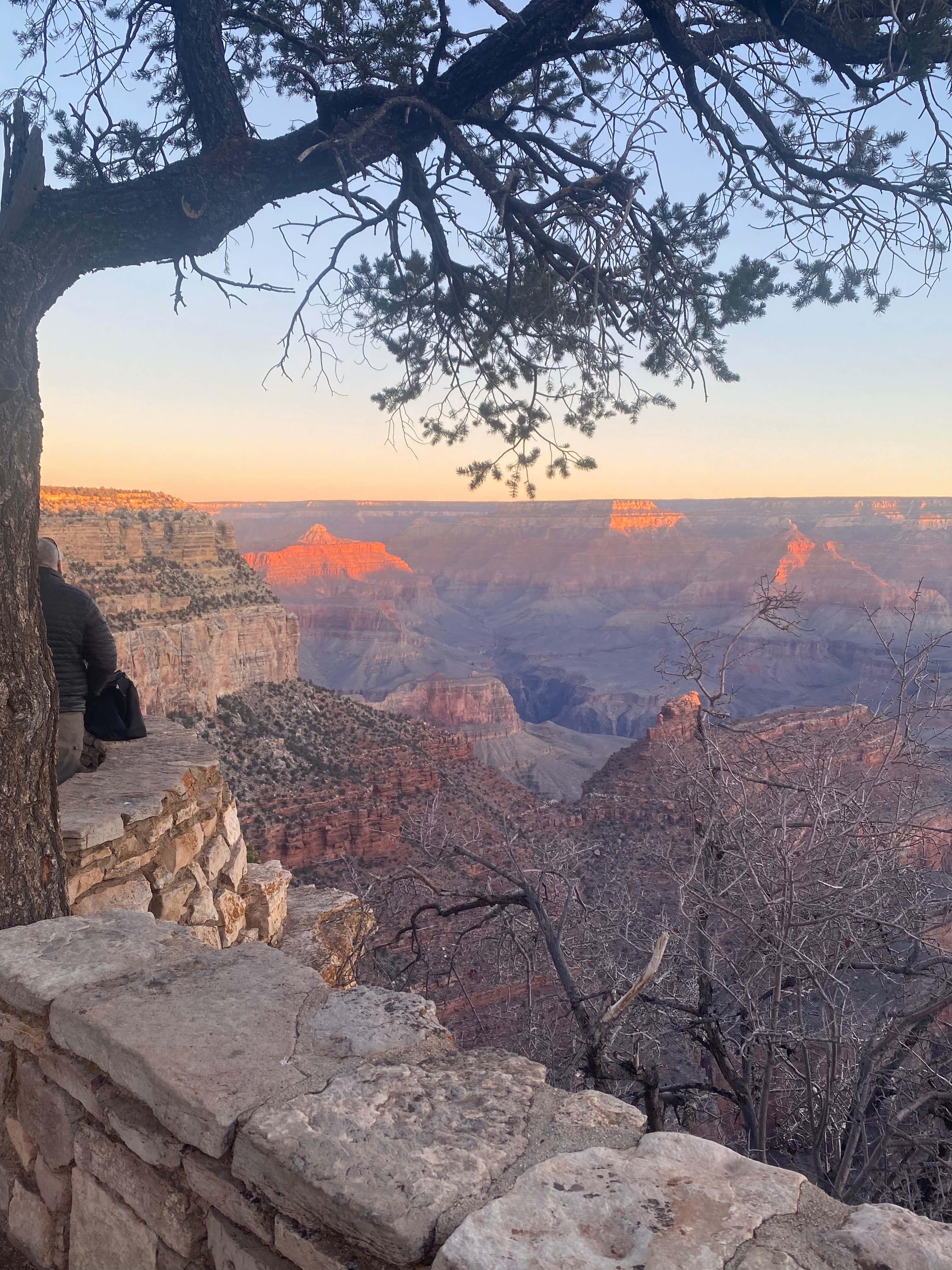 That view is worth staying up all night for. 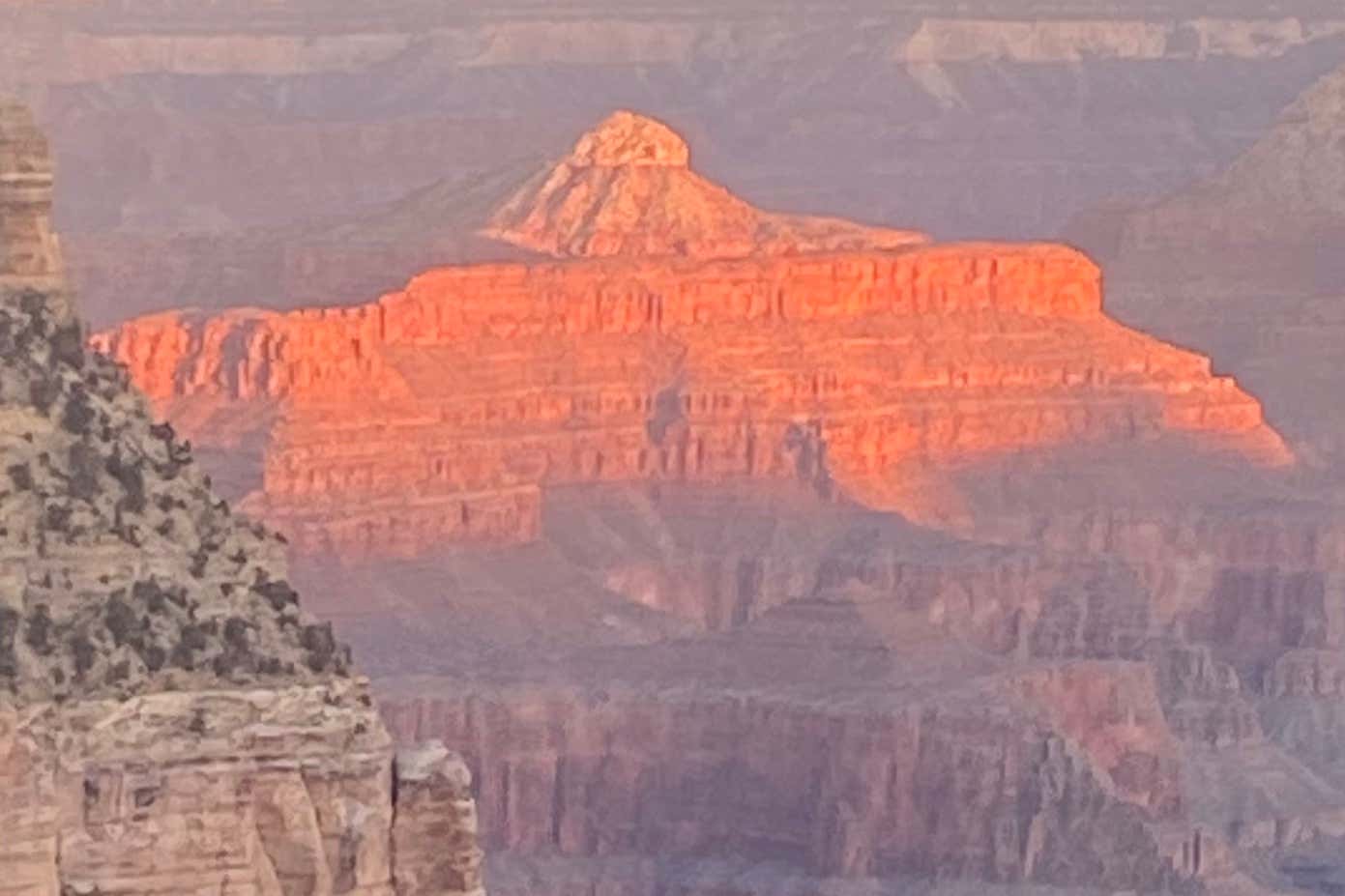 This Butte (No idea what the actual name for this rock formation is. Literally looks like an ancient temple to a  Sun god. The way the light hit it was spectacular. 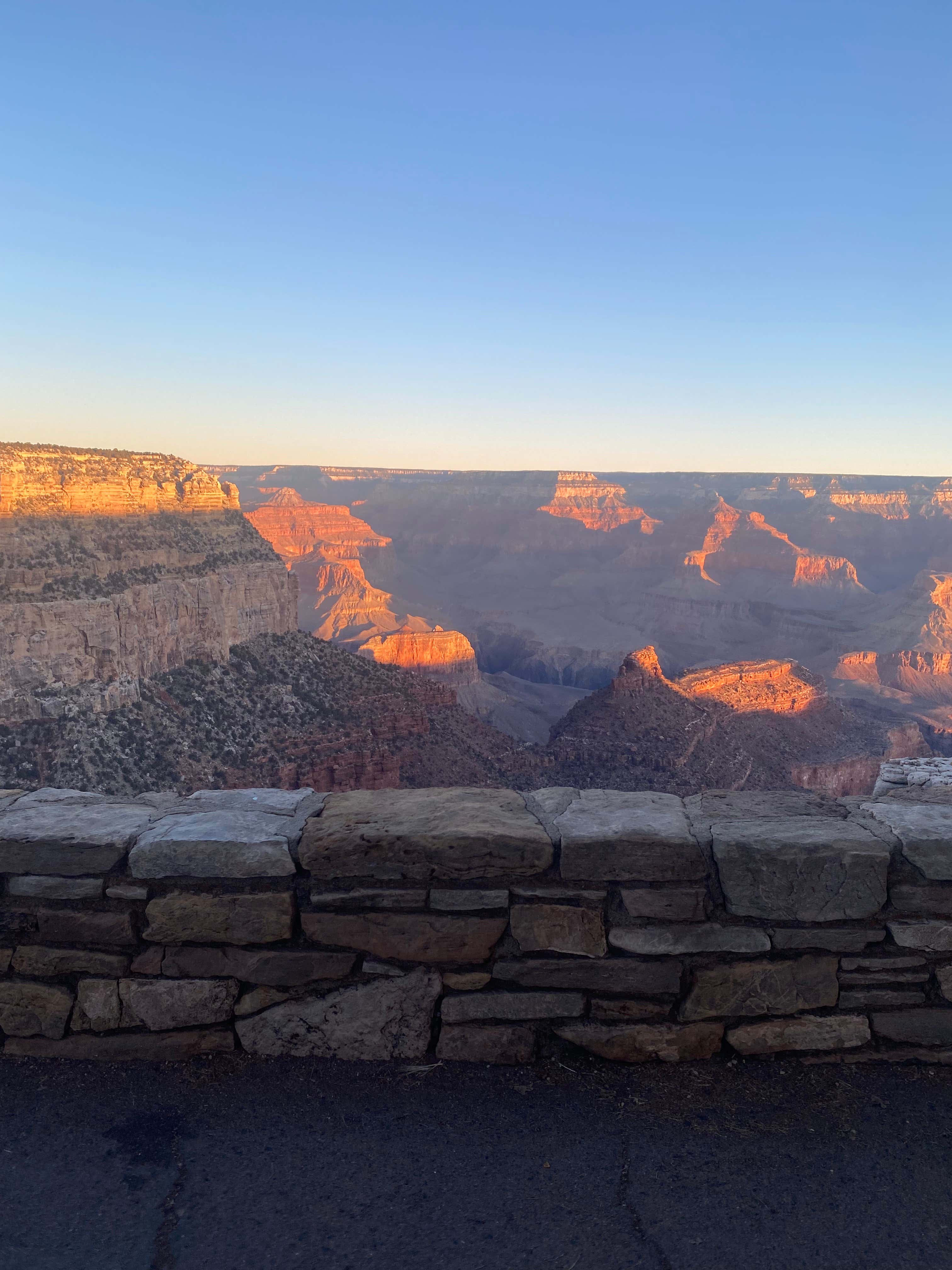 This panorama was pretty awesome of the whole scene.

Before the sun rose for comparison below. 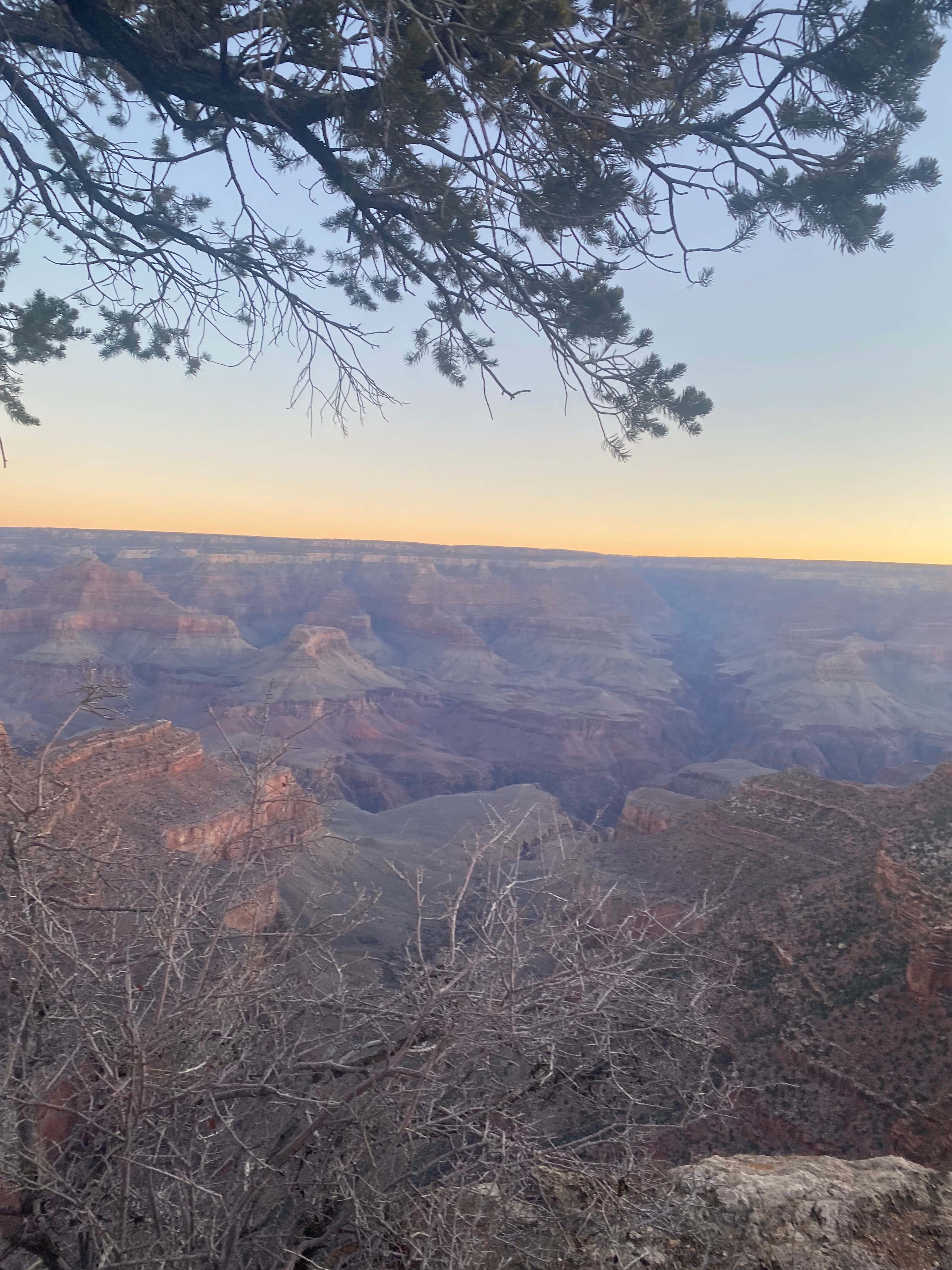 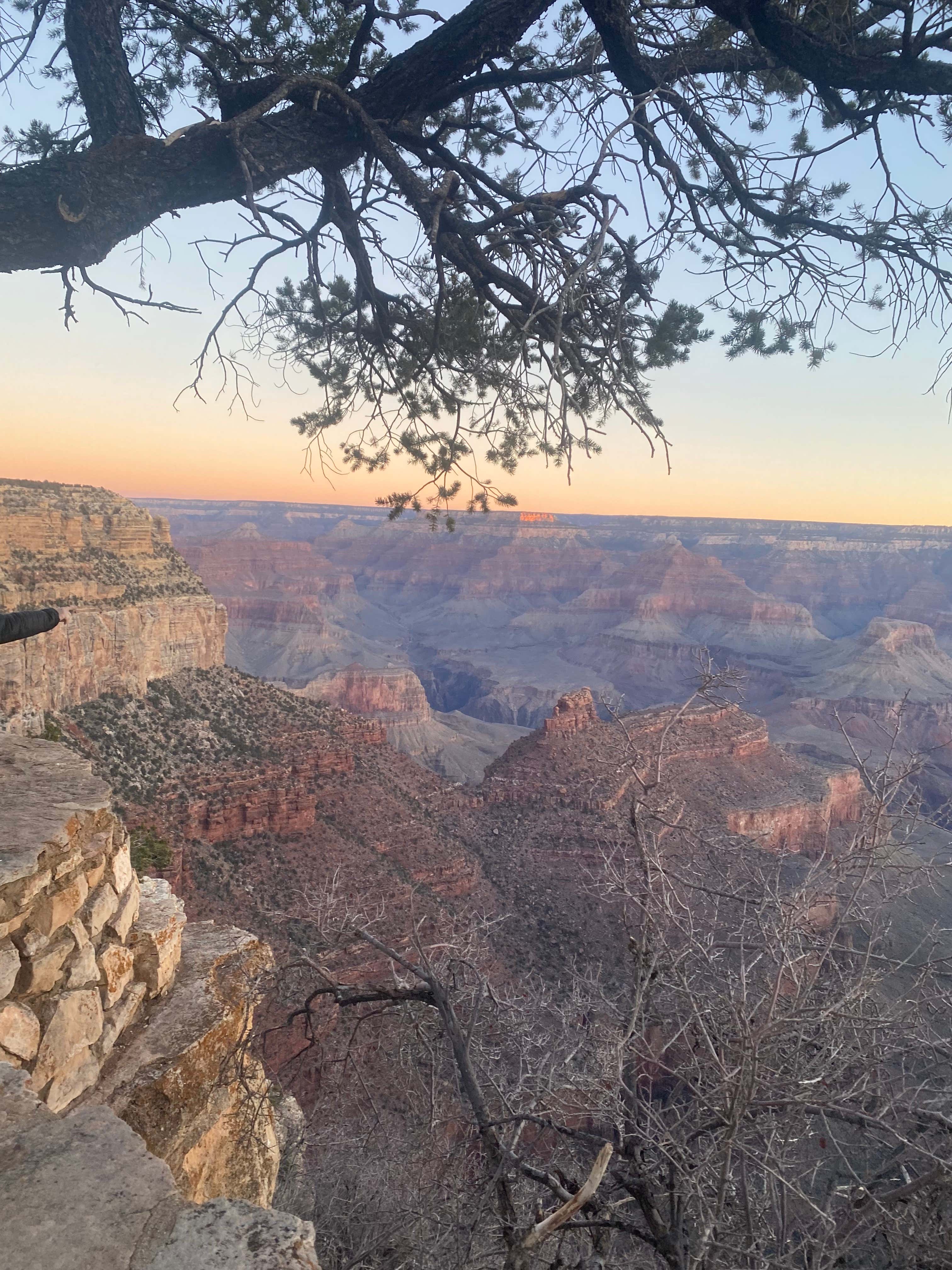 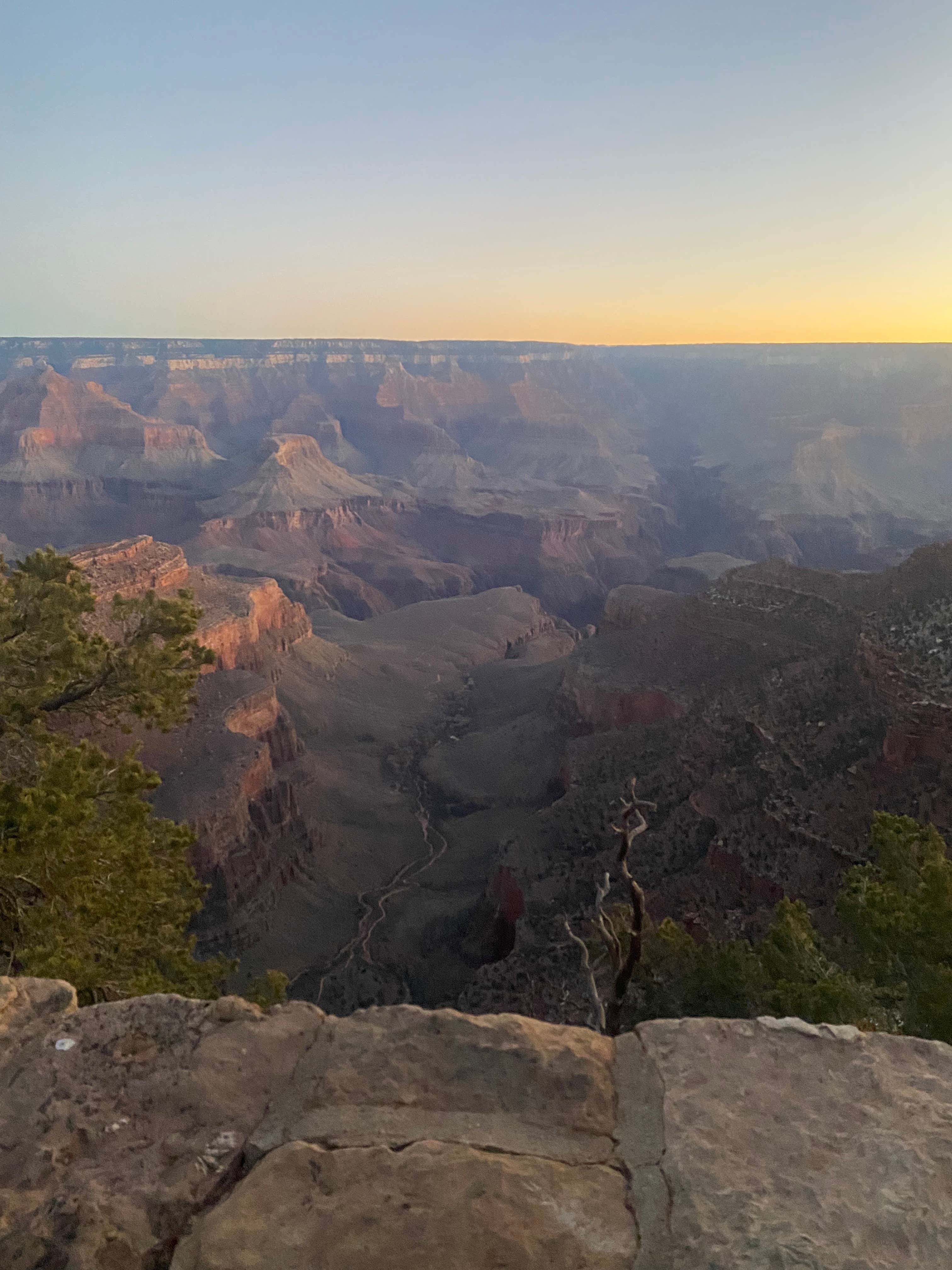 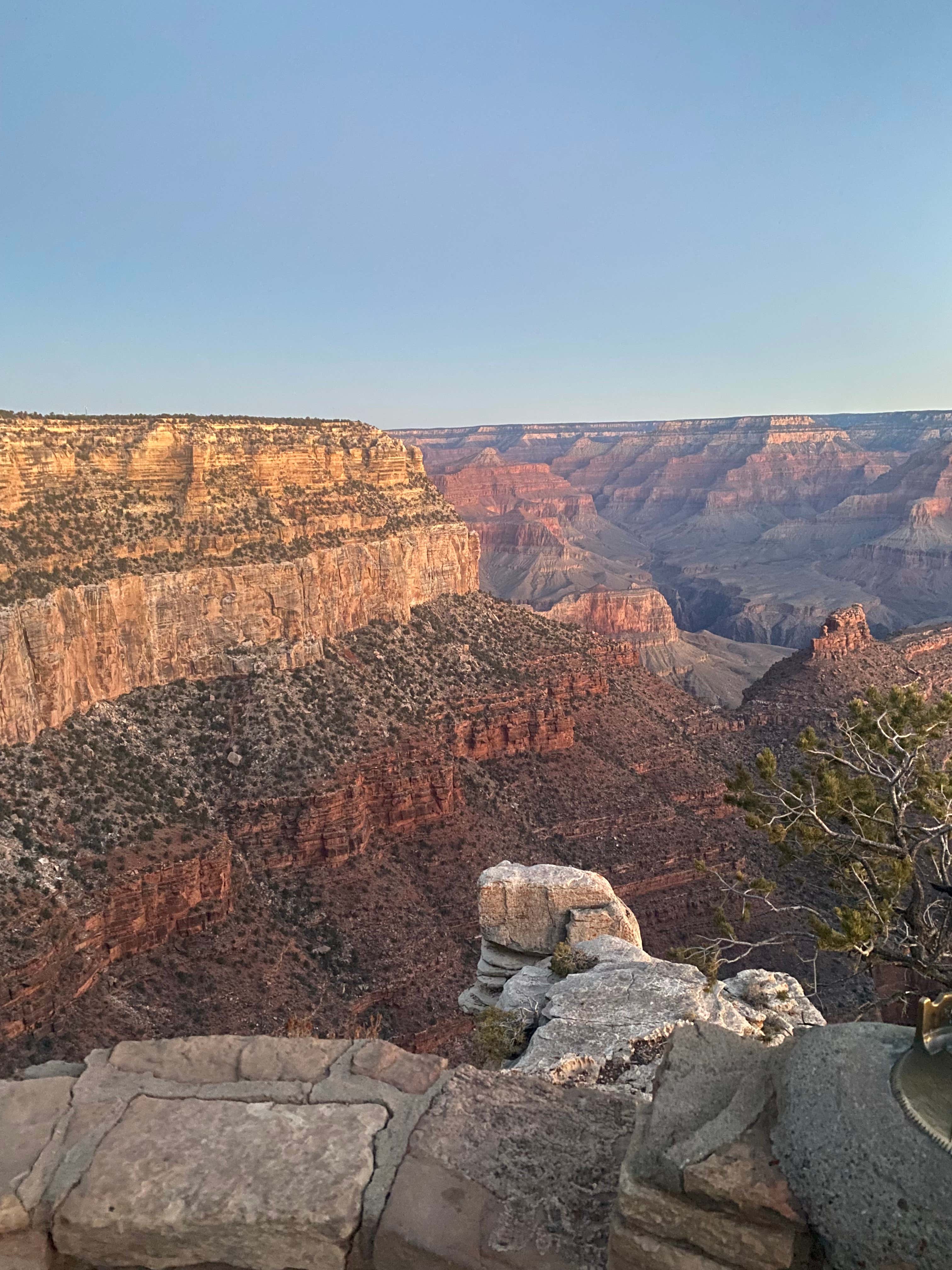 And then in the full light for full effect after breakfast. 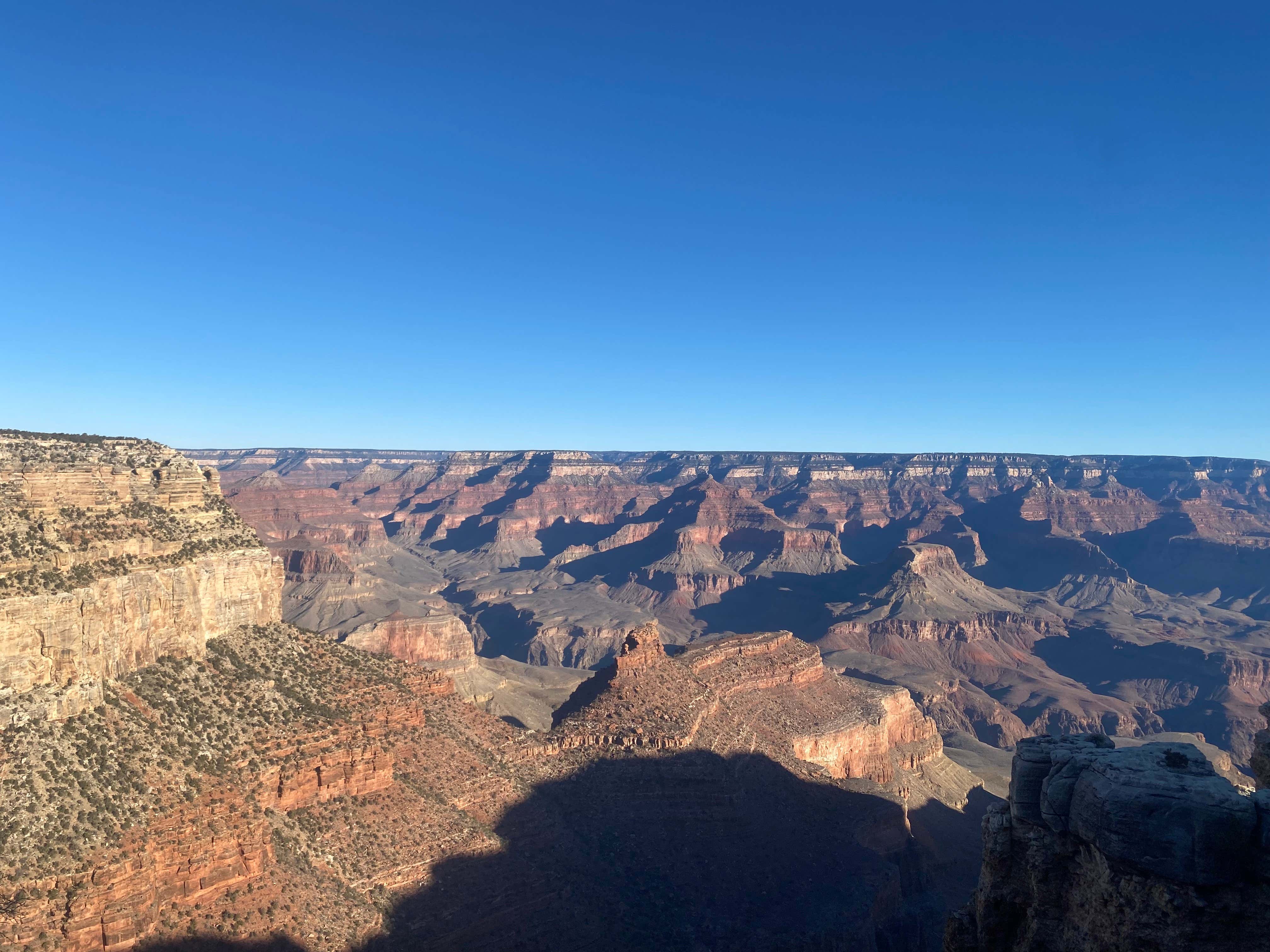 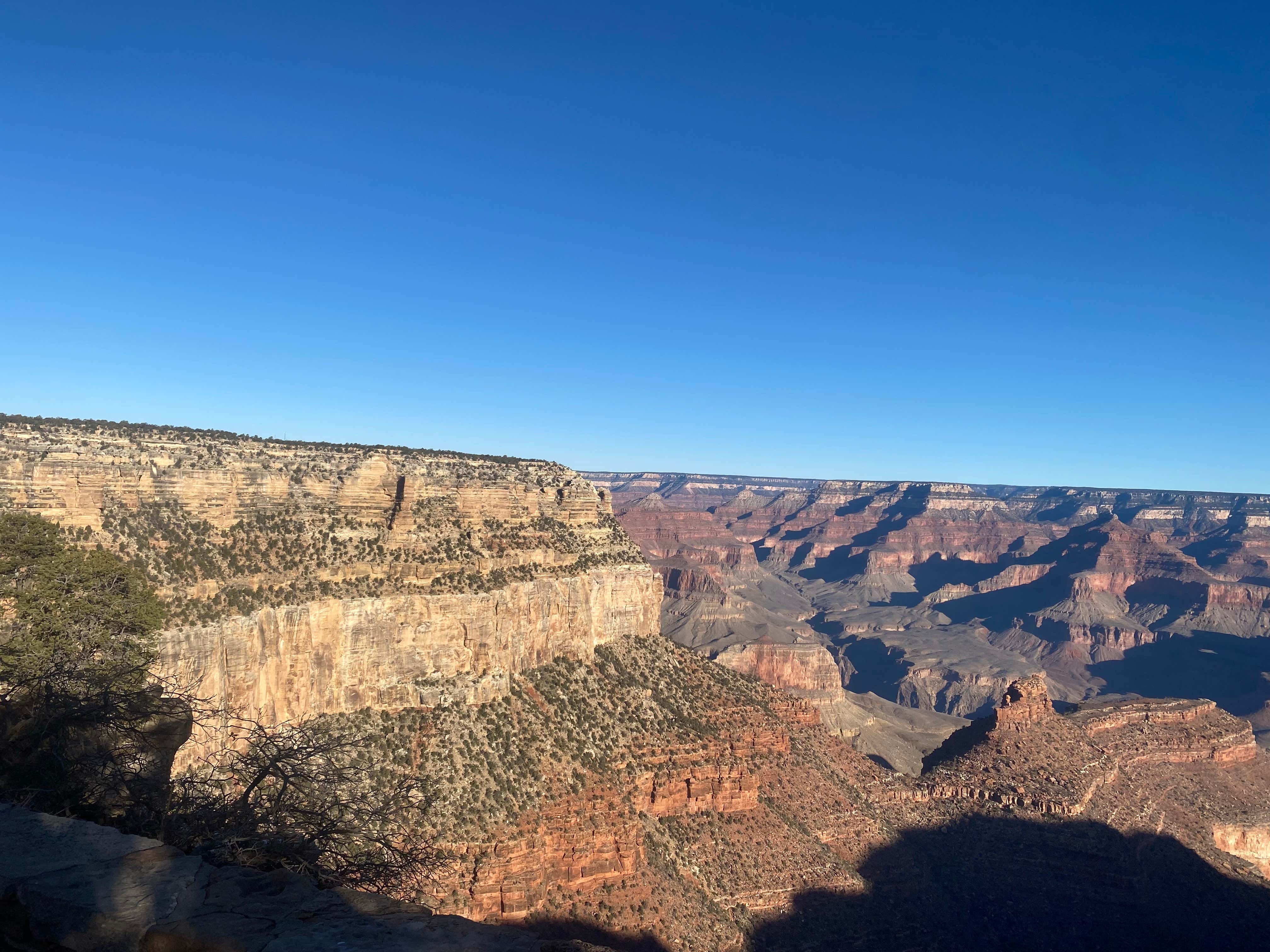 inspiring. Imagine being the first people to see the Grand Canyon. Teddy Roosevelt once stated "Europe has its magnificent cathedrals and castles, while the U.S has its impressive Wildlife and Nature" (This is absolutely not a real quote but I think TR said it, and I can't find it online.) It was a once in the lifetime experience seeing how amazing the Grand Canyon is, I am also terrified of heights, But when you are holding onto a well-rooted tree it is much more enjoyable.

Wild Bill's Journey merely started at the Grand Canyon. Just as the road called, the Offroad Called as well.

You see Wild Bill had been driving for miles and was sick of the highway. Wild Bill wanted to cut through the paths less traveled and find a shortcut back to Vegas.

The plan was done with the consultation of a road map that showed a couple of old dirt roads that could take us to Peach Springs and then back over the Hoover dam to Vegas. You see the plan was to travel through ranger roads on National Parks, through hunting ranches, and Native Reservations. The plan was ambitious, the road was going to be hard. Armed with a couple of gallons of water and 5 gallons of extra gasoline. We turned off route 64 and went deep into the desert. 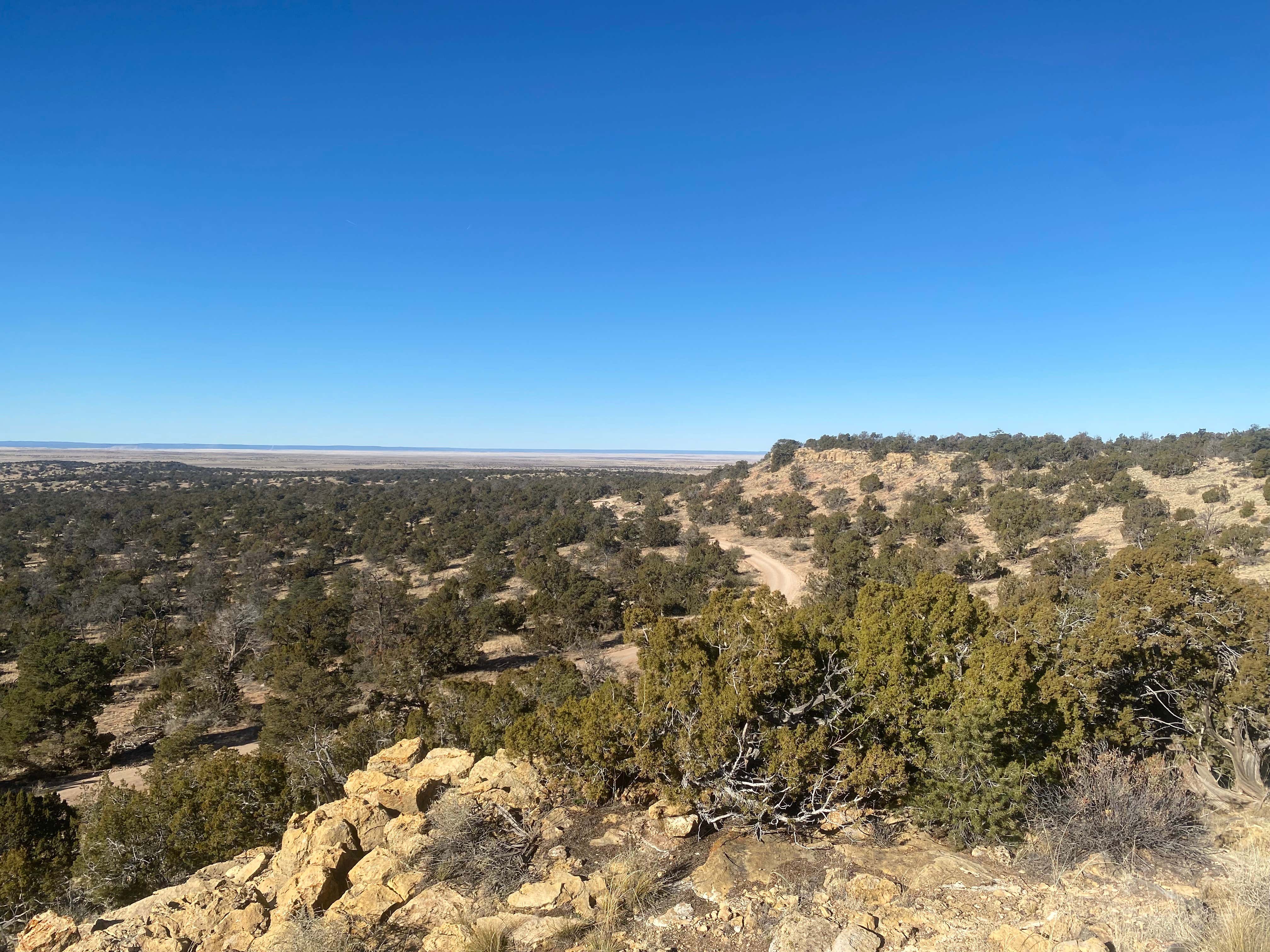 At first, though dirt, the roads were at least well built. The truck we were in handled it well and even though it was pretty deep in the wild. There was still service and our GPS still worked. We followed a road for about 20 miles and at first, it was going exactly to plan. 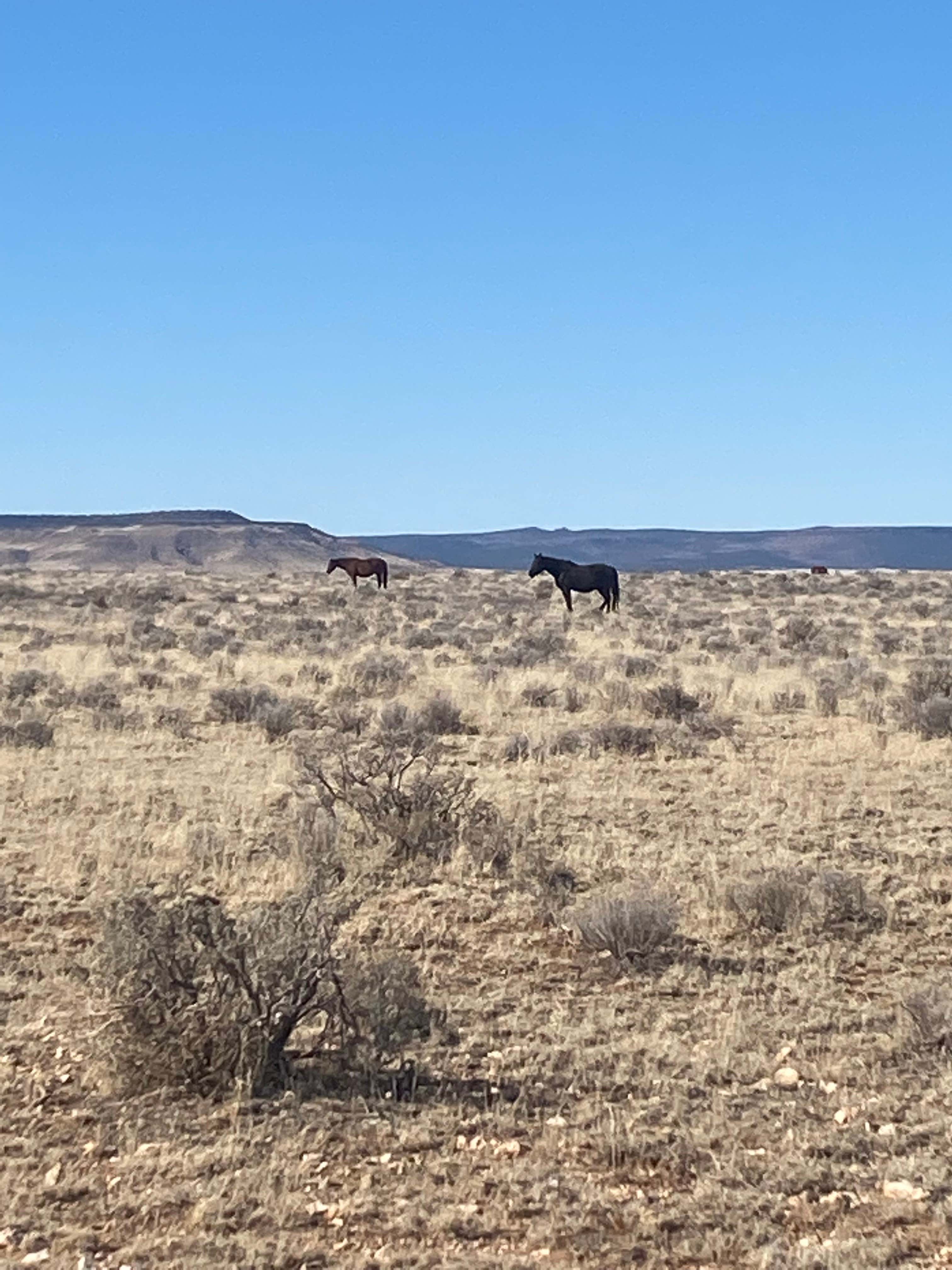 Wild Horse, pretty amazing how these horses are descended from horses that were ridden by the first pioneers, Chief Sitting Bull, or Spanish conquistadors. These horses have lived off the land for hundreds of years. 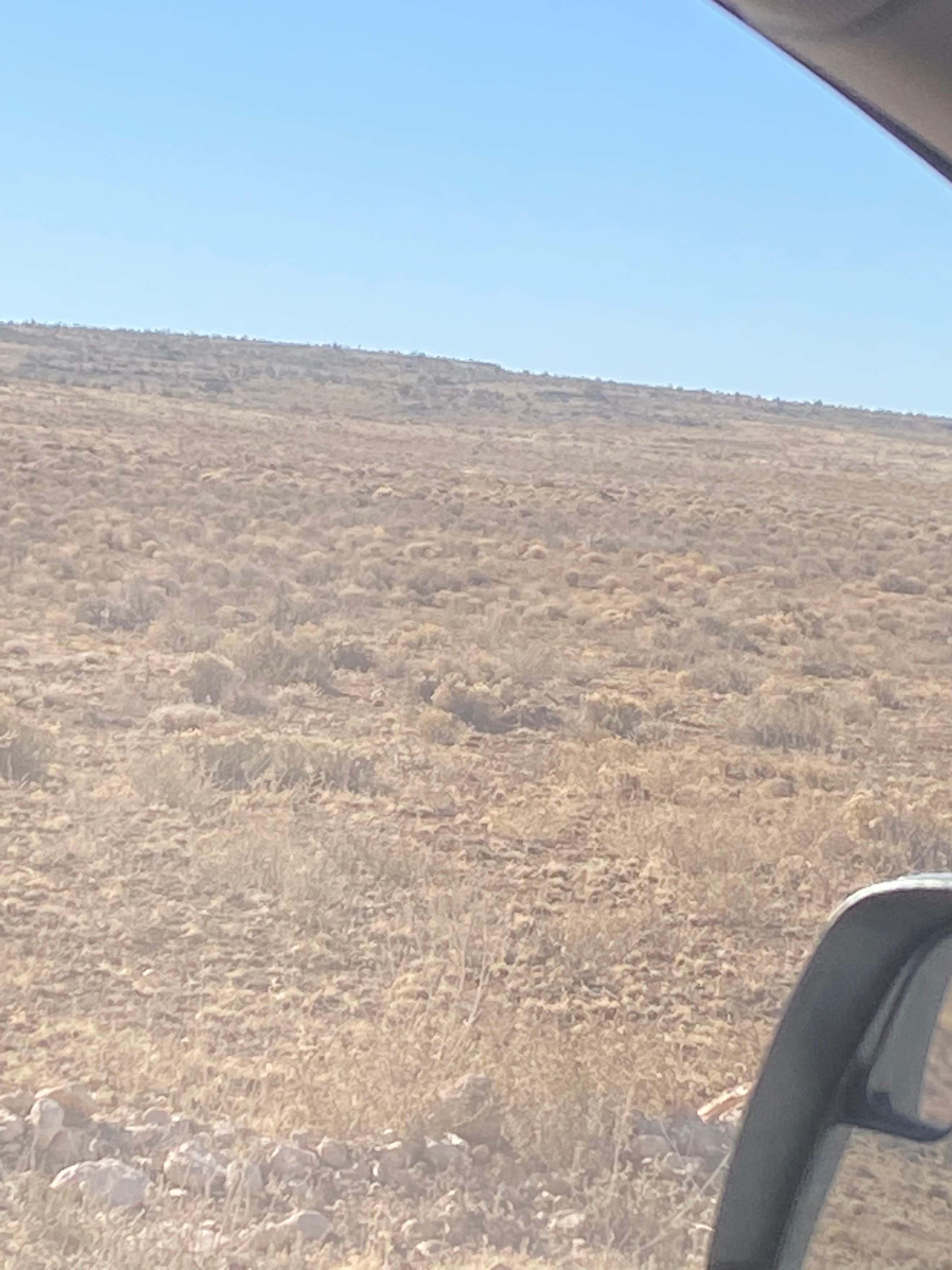 Coyote (Gotta look closely, whoever finds it first dm me the screenshot and I will retweet) (Lil find the coyote game). Coyotes are much larger out here than the ones in the east. This one was about husky-sized.

The trip was going great.

It was all going good, till we hit this sign. 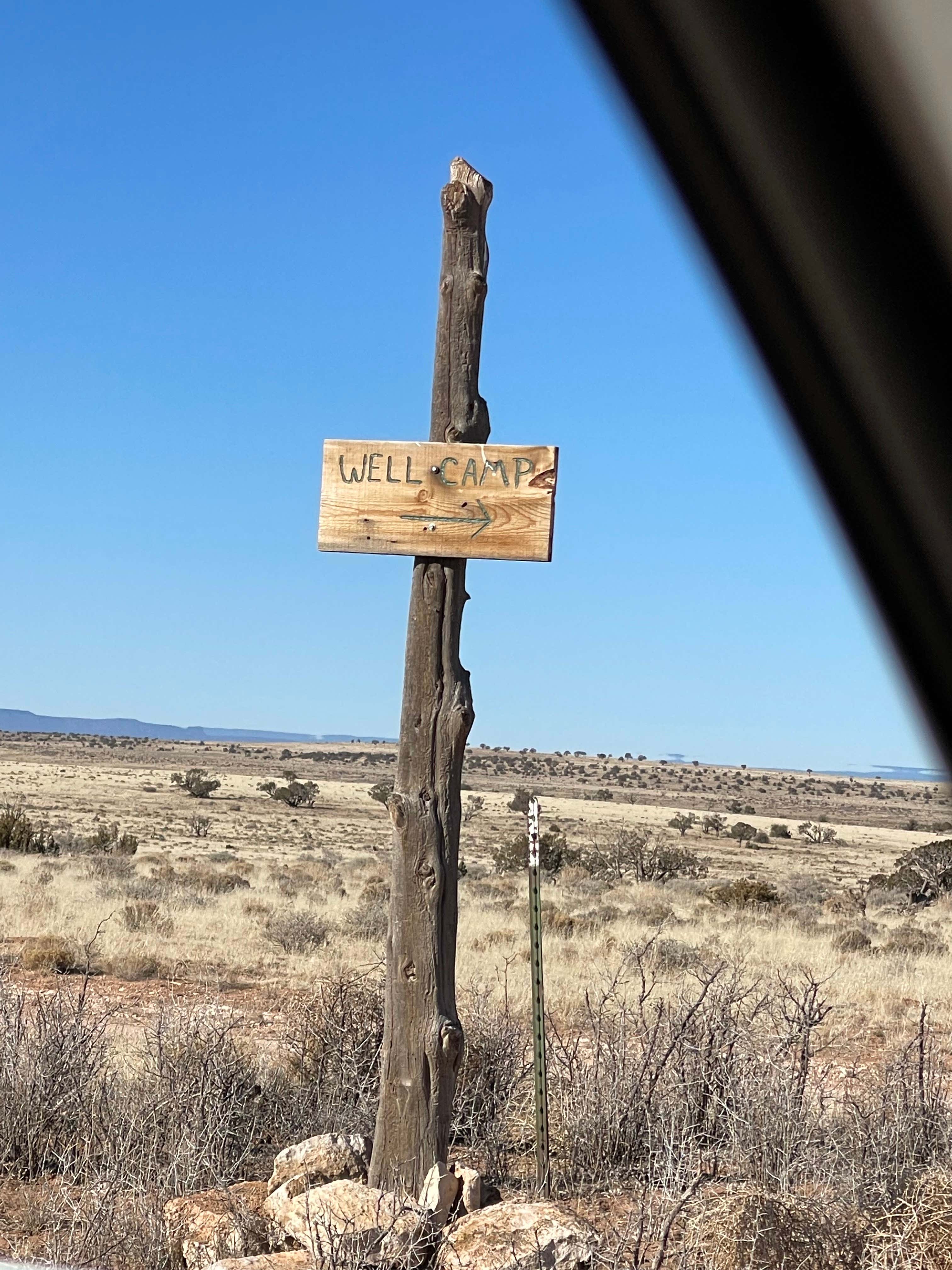 After taking the wrong turn at this fork we started to realize that the roads started to thin out. We realized the map we had was way outdated, and many of the roads were either washed away or nonexistent. We had no cell service and we had 2 options either track our way back or keep on pushing.  Wild Bill doesn't turn back.

In this 360 panorama from on top of the truck, you can truly realize just how desolate the place we were was. There was 0 infrastructure anywhere you looked. nor a decent dirt path that looked like it had anywhere to go. At that point, Wild Bill truly started to feel not only the panic set in, but understand how tricky this situation could actually result.

The reality was, even though we were in the middle of nowhere with a good amount of gas, it was possible for us to encounter terrain it would be very possible to get stuck. Risking it to truly go off-roading and leave any semblance of a trail was a huge gamble. One popped tire and we would have to try to trek to the highway to hopefully get there before nightfall. It was about a 25-mile walk to the highway but it was an endeavor Wild Bill did not want to take. (It will be very funny if one of you guys actually knows where the hell I was. it's very possible there was a good road right by us that we just couldn't find and we just ended up going deeper into the country). You see, due to having absolutely zero cell service, figuring out that the map didn't know jack shit about whether many of these roads even existed. That is when you had to call on your own knowledge of handling the situation. It was time to take small sips, rationing water. 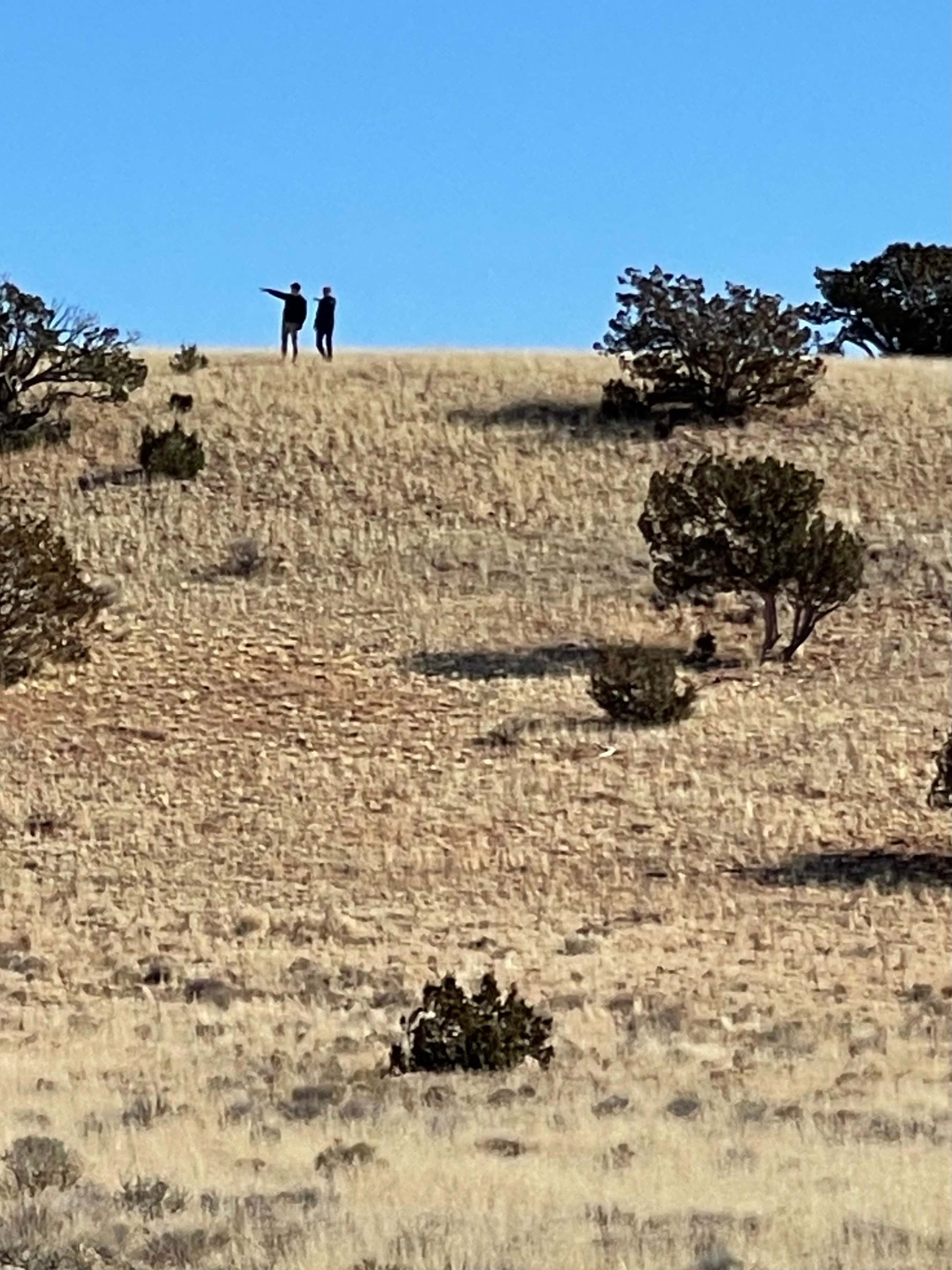 With no GPS the best navigation to be down was to climb to the tallest hill and try to find any sort of landmark. We had also not seen any sort of person, car, house, sign of any human life, in about 15 miles. But in the distance, you could make out one landmark. A white and red pole. At the time, I had no idea what that pole could possibly be but I guessed it was either an antenna or radio tower. Wild Bill deduced that there had to be some sort of road there that helped service that installation. 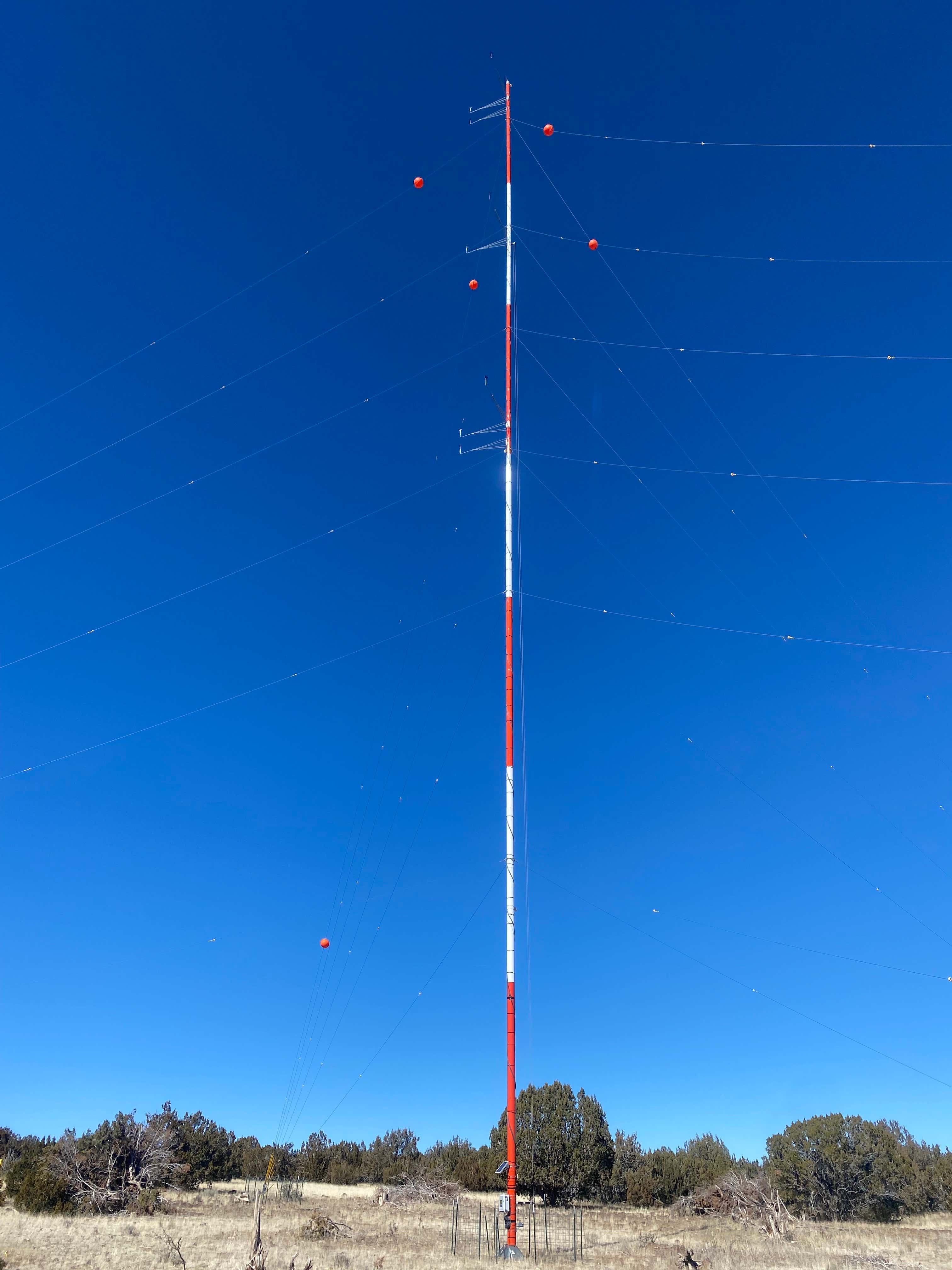 When we got there you could conclude it was measuring wind speed for potential wind turbines to be put in like all the ones along the side of I-40. (Also could be totally wrong on this). The thing is you only put those in literally the middle of nowhere where no one for miles could hear them, see them, or be bothered by them. This once again magnified how far from anything we were. Thankfully it brought us to an actual road, and by that, I mean a pretty shitty dirt road that hopefully might lead us to better roads. 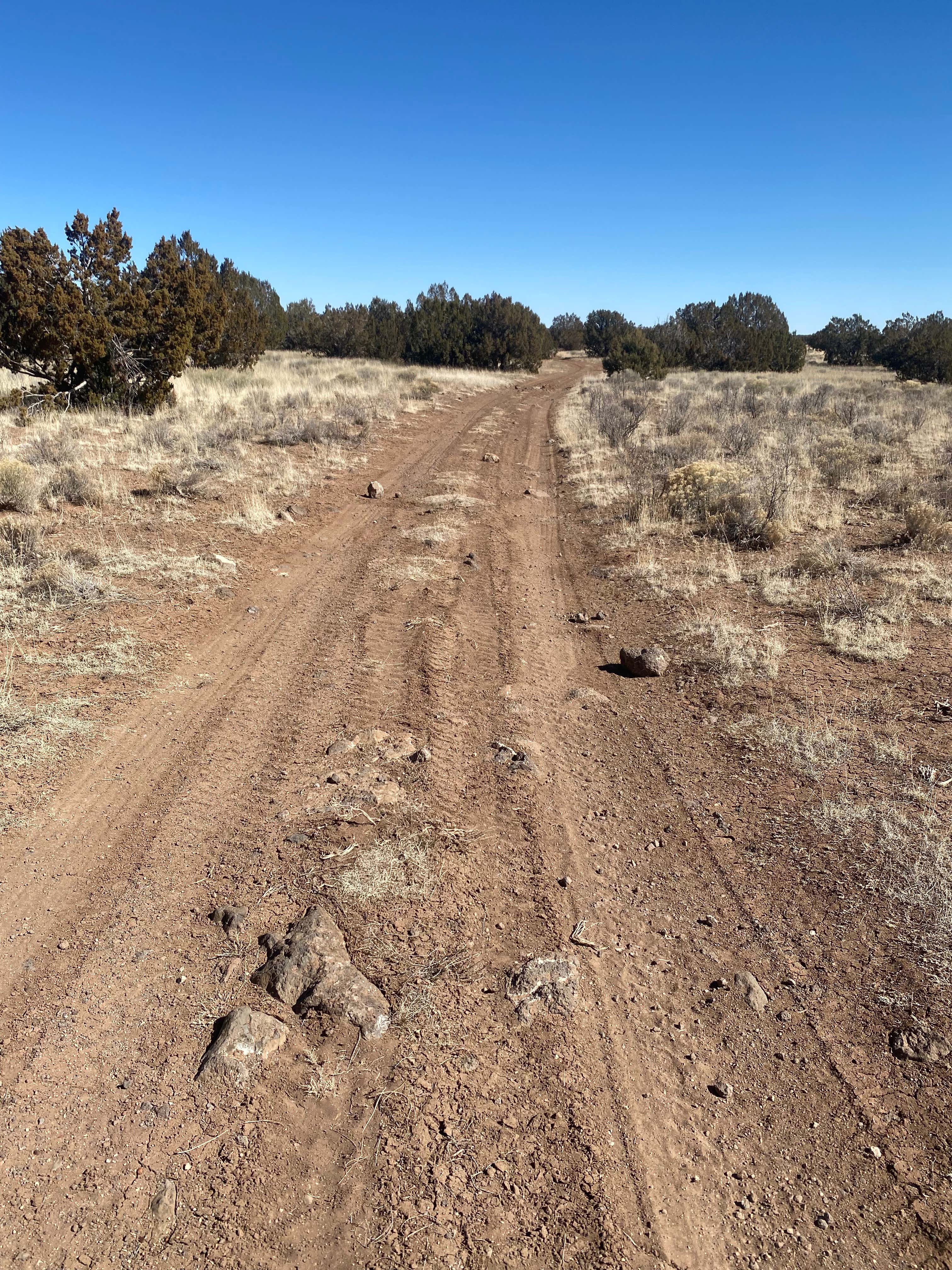 I wish I took more pictures of the actual roads because ones like this above would sometimes teeter out into nothing, and you would have to refigure out where the road was, and sometimes, like before we saw the big pole, they would just disappear.

Even though this one didn't look too promising but at the time you are kind of panicking and looking for any semblance of a way out. There was 0 service, 0 road signs, 0 anything. I didn't even know the area, in retrospect what we did was extremely stupid. The only thing we could deduce was our GPS coordinates that would register into a not loading google maps even then it was impossible to map out where the hell we were. (Again we may have been in a totally civilized spot but from my vantage point we were lost AF). We somehow made it through the flatland and through a pass near what the map called Trinity Mountain. After following this road after many miles We finally got back to the blacktop. (We did have to trespass through a ranch and there was a high probability we could have been shot) The trip took about 6ish hours from 9 am to 4ish, we were lost for about 4 hours of that time.

You can really understand how you could easily hide bodies out in that terrain. It might have been centuries since the last person stood on the land you were standing.

It was quite the adventure, one that was scary in the beginning but makes you oh so much more thankful for blacktop. Because at least with blacktop roads, you know that they might actually lead somewhere. We were going down roads I actually had no idea if they were going to lead anywhere. We would take certain roads and just end up at dead ends. It was a wild ride, but it's a damn sweet to get back to the road. The most lost I have ever been in my life. Really teaches one about getting to high ground to figure out your surroundings. Got back just in time for the Superbowl. 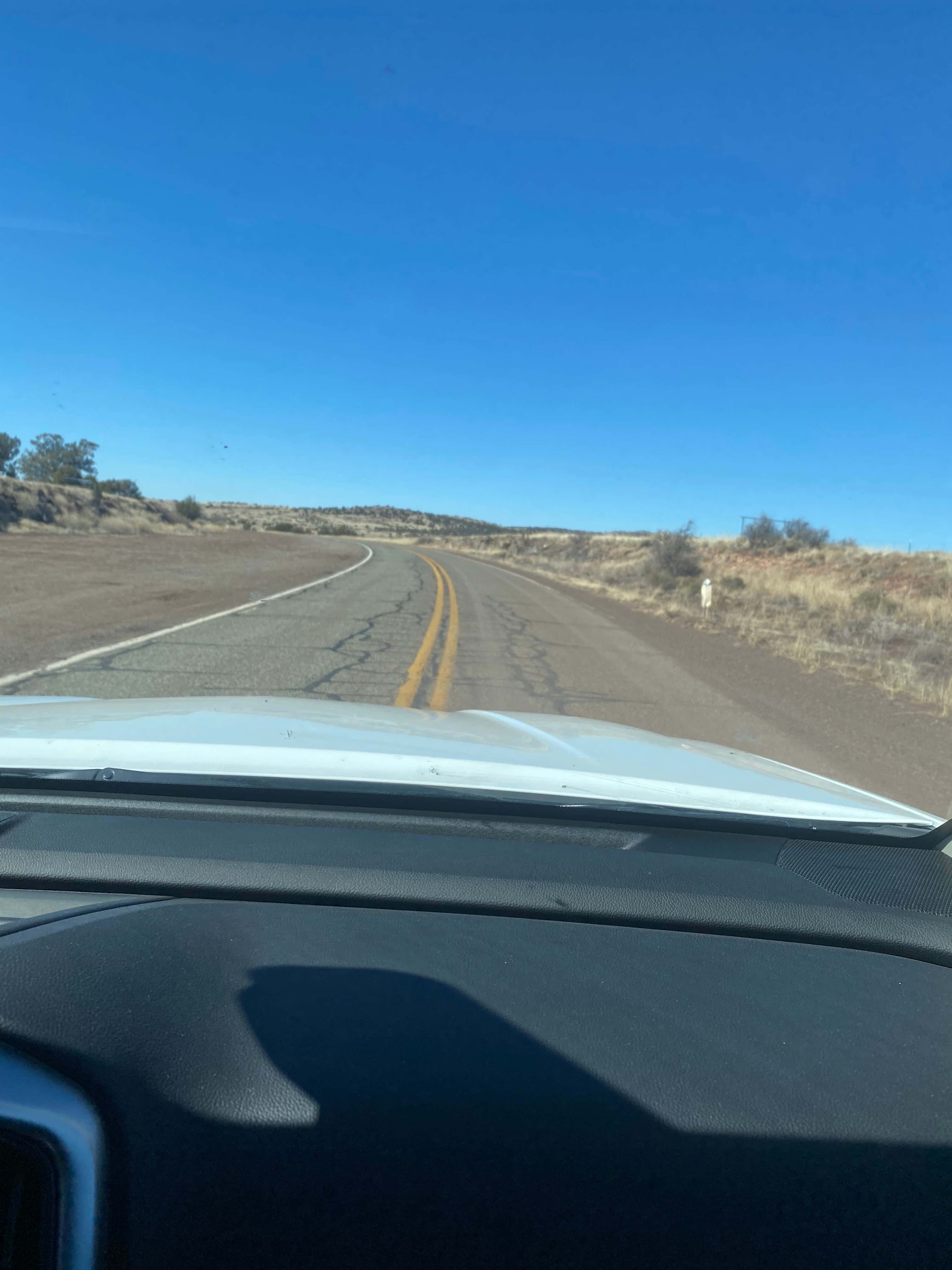 Being a Road Dog is easy, being an Offroad Dog is a different beast.