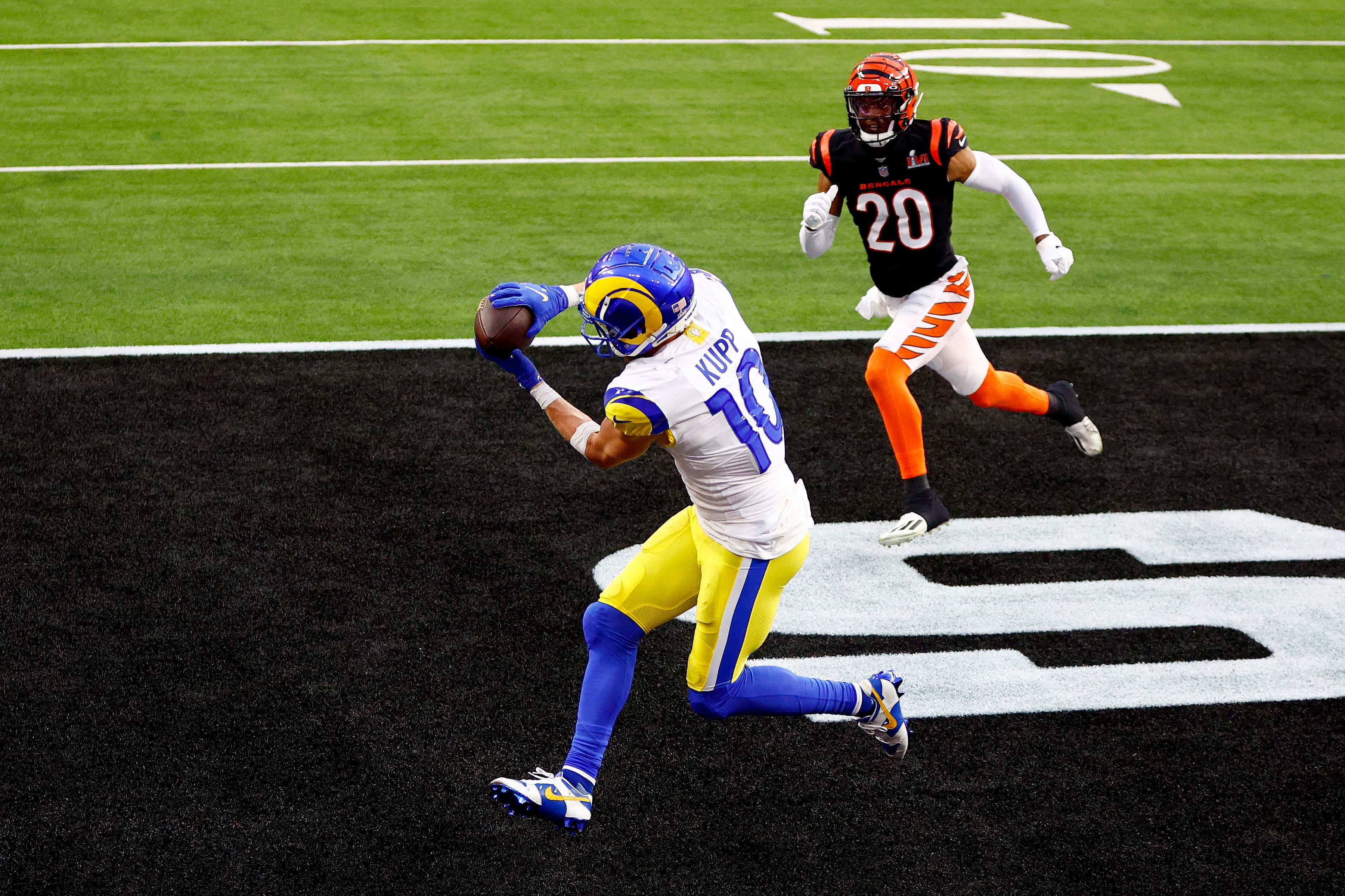 Now that we've seen Cooper Kupp put a Super Bowl MVP ribbon on the best season any wide receiver has ever had:

… it's worth taking a moment to look back at his college highlights to serve as a reminder of where he came from.

With the clarity of hindsight, it's tempting to watch him making plays all over the red carpet of Eastern Washington and dominating against Western Illinois, Southern Utah, Northern Colorado and other schools named after compass headings and states and not declare his talent was obvious and everyone should have known he'd be this good. But that's revisionist history.

Here's a typical example of what the scouting reports were saying ahead of the 2017 draft, from NFL.com:

Kupp is the most prolific pass-catcher in Football Championship Subdivision history, setting all-time records in total receptions (428), receiving yards (6,464), and receiving touchdowns (73). … He won just about every award he could win in his four years with the Eagles. [including] the Walter Payton Award as the FCS's best player as he led the nation in all three major categories (114-1,642, 19 TD). …

Produced elite numbers against a lower level of competition but saved a monster game for Washington State early in the season. He is as natural a pass catcher as you will find with desired competitive drive on each snap. His transition to NFL-level cornerbacks will take time, but he has the ability to become an early No. 3 receiver and eventual starter. …

In short: He had a great college career against defenders who'll never play football again. But he's limited as a route-runner. And over time, he might become a WR3 or possibly a starter. That was the consensus opinion. So he ended up being the seventh wideout taken and the 69th pick overall. And in his fifth season, is virtually uncoverable. From Pro Football Focus (paywall) who gave him their third highest grade in the league, behind only Trent Williams and Aaron Donald:

Kupp is both a phenomenal receiver and the beneficiary of the kind of deployment that makes it almost impossible for an opposing defense to take him out of the game. He lined up in the slot on 65.5% of his snaps, generating 1,402 yards from that inside alignment alone in the regular season. Kupp gained 3.45 yards for every route run from the slot, as that alignment makes it very difficult for defenses to just defend him with their best corner or play aggressive man coverage.

The point of all this is not to point and laugh at all the stupid dumbasses who were too stupid and dumbassy to recognize a future unstoppable force of nature when he's staring them right in their stupid, dumbass faces. Because nobody could've seen this coming. My larger point is that there is a lesson to be learned here. One that needs to be kept in mind as Pro Days and the Combine approach and Draft Prep Season begins. And that is that wide receiver is, and long has been, the hardest position in all of pro sports to evaluate, project and draft. And it's not even close.

Kupp happens to be the best of the WR Class of '17, but it happened to be a very good group. Of the six wideouts taken ahead of him, only John Ross (957 career yards) can be considered much of a bust. Only Ross, Zay Jones and Curtis Samuel have fewer than 227 receptions and 3,300 yards. The fact Kupp went 7th is a swing and a miss to be sure. But Chris Godwin went 15 spots after him and Kenny Golladay 12 slots later. In between Kupp and Godwin/Golladay we watched the Jets take ArDarius Stewart (6 receptions for 82 yards) and Denver grab Carlos Henderson (0 for 0).

That, in microcosm, is the nature of wide receiver scouting. More than any other position, you can watch the film and measure the measurables and sit across the table in Indy peering into a man's eyes to read his soul, but it's the most guessworky of guesswork. It's less a science than it is a pseudo-science. College receiver is divination. It could be taught by a crazy lady with thick glasses in a tower with cups of tea instead of stopwatches.

Something very similar happened two years later. The Patriots are paying a heavy price for the disaster that is the N'Keal Harry (4 TDs, less than 600 yards, seemingly an equal number of drops) pick when Deebo Samuel and AJ Brown were still on the board. They've gotten killed for that decision and well they should. It's cost them immeasurably. But the haters need to be reminded that after DK Metcalf broke the Combine, he was the ninth receiver off the board and the last pick of the second round. Meaning that every team in the NFL passed on him. Twice. Selected between Brown and Metcalf were JJ Arcega-Whiteside, Parris Campbell and Andy Isabella. While Diontae Johnson and Terry McLaurin went two and 12 picks after Metcalf, respectively.

That's just what you get into when you try to project college receiving talent to the next level.

Keep in mind that no one ever invested more in the position than Matt Millen in Detroit. He drafted wideouts in the Top 10 of the draft an incredible four times in five years from 2003-07. And all that draft capital spend yielded him not only HoFer Calvin Johnson, but also Roy Williams, (5,700 yards, 44 TDs). To go along with all time busts Mike Williams and Charles Rodgers. That weird fixation on building a team from the outside-in and those terrible strikeouts laid the foundation for the first 0-16 team in history.

I've always maintained that not only is WR nearly impossible to scout with any degree of certainty, it's the most overdrafted, overpaid and overrated position in the game. And I say this as someone who just watched the elite likes of Kupp, Ja'Marr Chase, Davante Adams and Tyreek Hill carry their teams deep into the postseason. So I want one. Bad. In my strongest Veruka Salt voice, I'm imploring GM Bill "I want one, Daddy! I want him now!"

But I also need to remind myself what happens when you shop in this particular market. With very few exceptions, these guys are all Mystery Boxes. Unlabeled Loot Crates with no return policies. They're Schroedinger's Wideouts, where they're both a HoFer and a Bust until you open the box to study them, and by then it's too late.

So I'm just cautioning everyone who wants the next Cooper Kupp - and that includes myself - to be careful what you wish for. Because finding the next one of him is the most inexact science in football.