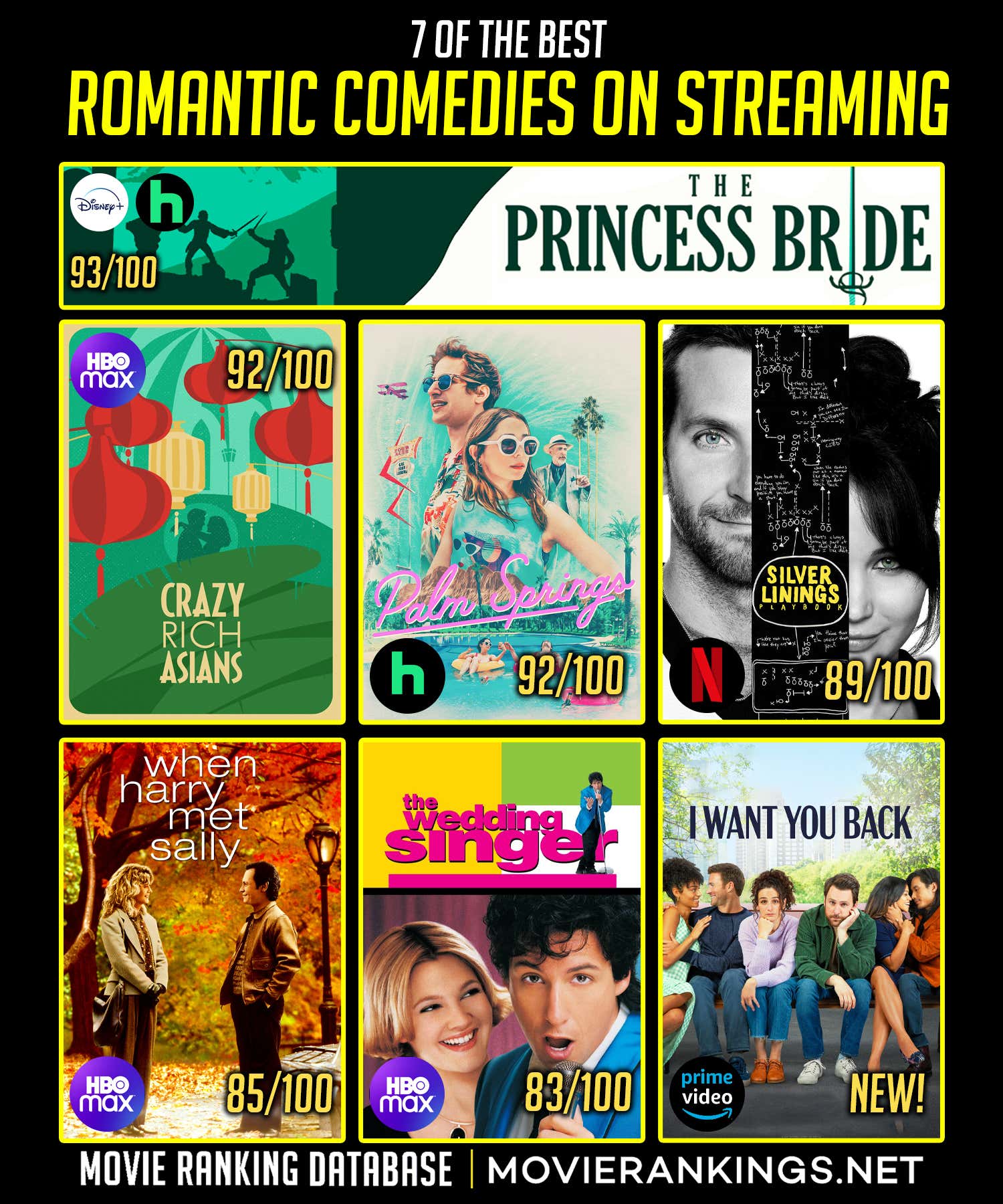 It's that wonderful time of the year when you gotta take a break from doing whatever it is you actually enjoy and spend quality time with your significant other instead. For those of you that want to avoid getting stuck watching a shitty rom com picked by the Netflix algorithm, here are some alternatives.

In this enchantingly cracked fairy tale, the beautiful Princess Buttercup and the dashing Westley must overcome staggering odds to find happiness amid six-fingered swordsmen, murderous princes, Sicilians and rodents of unusual size. But even death can't stop these true lovebirds from triumphing.

For some reason, I don't think this is a movie that comes to mind when most people think of the Rom Com genre. But why? It has a great romantic core and tons of fantastic comedy. It's infinitely quotable and has only gotten better every time I watched it.

An American-born Chinese economics professor accompanies her boyfriend to Singapore for his best friend's wedding, only to get thrust into the lives of Asia's rich and famous.

This one definitly leans more on the side of romance and drama, but that doesn't make. the humor any worse. There are a lot of funny characters in this movie, but Ken Jeong and Jimmy O. Yang really crush their smaller parts. Also, FWIW,  I think this movie has arguably the best wedding scene in movie history.

When carefree Nyles and reluctant maid of honor Sarah have a chance encounter at a Palm Springs wedding, things get complicated when they find themselves unable to escape the venue, themselves, or each other.

This movie unfortunately flew under the radar in 2020, but it was a real gem. I'm not a huge day of groundhog day scenarios in properties that aren't the movie Groundhog Day.  This movie did a great job playing within that scenario, though, and the performances rocked. It's a really funny movie that also has a lot of heart and an element of realness.

After spending eight months in a mental institution, a former teacher moves back in with his parents and tries to reconcile with his ex-wife.

SLP obviously isn't a riproaring comedy or anything like that, but it quietly makes good humor out of some dark places. It's probably the last performance of Jennifer Lawrence I actually liked but damn, was it good.

During their travel from Chicago to New York, Harry and Sally debate whether or not sex ruins a friendship between a man and a woman. Eleven years later, and they're still no closer to finding the answer.

When Harry Met Sally is the true genesis of Rom Coms. If you polled 100 people off the street and asked them to name a Rom Com, a majority would pick this. You know why? Because it is really damn good. Beyond that, it still gives hopes to us ugly schlubs that we too may end up with an out-of-our-league woman who fakes orgasms.

Robbie, a local rock star turned wedding singer, is dumped on the day of his wedding. Meanwhile, waitress Julia finally sets a wedding date with her fiancée Glenn. When Julia and Robbie meet and hit it off, they find that things are more complicated than anybody thought.

This movie is tremendous comfort food to me and I earnestly think it is one of Sandler's best performances. And like most movies he makes, it has great, concentrated punches from other actors in small roles.

Peter and Emma are total strangers. When they meet, they realize they were both dumped on the same weekend. Their commiseration turns into a mission when they see that each of their ex-partners have happily moved on to new romances.

This is a new movie that we interviewed Scott Eastwood for and it was a very pleasant surprise. It's from the director of Big Time Adolescence, and has a pair of very funny and sneaky heartfelt performances from Charlie Day and Jenny Slate. It might feel a little predictable, but it doesn't have that cheap film of traditional Rom Coms which i appreciate.