(WARNING - THIS IS A LONG TIMELINE. IF YOU'RE GOING TO CRY ABOUT THE LENGTH (that's what she said) TAKE YOUR TEARS ELSEWHERE)

I know everybody comes here for all the latest breaking Kanye West news. And even though there was a ton of it over the weekend, I didn't want to allow some overhyped game to overshadow it. So we waited til this morning.

By now we all know nobody promotes an album release like Kanye West.

You can't really blame him because it's foolproof at this point.

Even though we all know that it's apart of his act, we can't help but watch the shit show unfold. And this latest spectacle might be the best/cringiest one yet.

Here is a timeline of what has transpired this week. Try to keep up.

First a reminder. These are the guys beefing right now.

That's Kanye on the left, and Pete Davidson on the right.

This is the woman they're beefing over.

Kanye and Kim split up as we all know with Kanye going on a dating spree consisting of a couple 22 year olds, Irina Shayk, and now the chick from Uncut Gems.

Kim fell into the arms of the guy who hung around her and her husband pretending to be their friend, but who was just biding his time playing the long game, waiting for his chance.

Hell has since broke loose.

Fast forward, or rewind, to February 5th. Billie Eilish had a concert where a fan needed emergency medical attention. She took the opportunity to pause her show, and mention to the crowd that, "I wait for people to be OK until I keep going." Taking a jab at Travis Scott.

Kanye did not appreciate that.

"COME ON BILLIE WE LOVE YOU PLEASE APOLOGIZE TO TRAV AND TO THE FAMILIES OF THE PEOPLE WHO LOST THEIR LIVES," the rapper, set to headline Coachella alongside Billie and Harry Styles, wrote on Instagram Feb. 9. "NO ONE INTENDED THIS TO HAPPEN TRAV DIDN'T HAVE ANY IDEA OF WHAT WAS HAPPENING WHEN HE WAS ON STAGE AND WAS VERY HURT BY WHAT HAPPENED AND YES TRAV WILL BE WITH ME AT COACHELLA BUT NOW I NEED BILLIE TO APOLOGIZE BEFORE I PERFORM."

Demanding an apology while threatening to not perform at Coachella. Bold strategy.

I guess her name is Chaney Jones and it appears she makes a living as a poor mans Kim.

(And by poor man, I mean Sheik from Dubai. Tomato, Tomáto)

The next day Kanye went at his buddy Kid Cudi's throat, saying that he was being dropped from Donda 2 because he's friends with Pete Davidson. (Who he refuses to acknowledge by name and has nicknamed "Skete")

The artist formerly known as Wizard Cud fired back, calling Kanye a “fuckin dinosaur” and claiming to be the best part of all his previous albums.

Kanye then posted a semi-famous pic of him, Cudi, and Pete Davidson sharing dinner together, with Pete Davidson's face X'd out and a caption referring to Davidson stabbing him in the back.

On Sunday morning we were all in for a real surprise.

It seemed Kanye found a shitposter-generated meme that caught his eye and he decided to post it to his tens of millions of followers.

It appears Julia Fox, Future, Drake and Travis Scott are all on his team, while Billie Eilish, Taylor Swift, Kid Cudi, Pete Davidson and Kim are the opposition.

He also threw a nice jab in on the caption.

He also posted another movie poster with another caption

Little did we know Kanye was just getting started…

Kanye then proceeded to post this picture, calling Pete Davidson a ‘dickhead’ and accusing him of dating Hillary Clinton.

Evidently, people began to question if Kanye's instagram had been hacked. So he made it a point to tell the world it had not.

All-time picture right there. Kanye is crazy if he doesn't make this his next album cover.

He was far from done. In fact, he was just getting warmed up.

Kanye publicly shared a debunked story about Pete Davidson allegedly sending “intimate” photos of Ariana to her ex, Mac Miller, before he died. Insinuating that they pushed Miller over the edge. He captioned it with a simple, “NO COMMENT.”

This, like almost everything else, has since been deleted.

A repost of Pete Davidson's infamous Hillary Clinton tattoo, complete with ramblings of a shadow government. This is the Kanye I signed up for.

He elaborated on the accusation further in his next post-

West then shared a blank black image, tagging American radio host and television personality Lenard Larry McKelvey, writing: "YALL SEEN THAT TATTOO BUT IF I SPEAK UP THEN IM CRAZY I TOLD YOU NOT GOING TO USE THAT ONE NO MORE WHEN A GARBAGE MAN GOES TO WORK HE GONNA SMELL LIKE TRASH BUT ITS TIME TO TAKE THE TRASH OUT THE HOUSE."

In another post, Ye went on a tangent about controlling his narrative. “When I get on my Gram Im not afraid to get sweaty or take a hit for my family this is not a rant this is called freedom of speech I am a form of media Bezos bought The Wall Street Journal and will still never have this level of influence no matter how many dinners he does with my wife and Sketer and Page Six stop using bad photos of me yall that whole office would die to go on a date,” he wrote.

Then Machine Gun Kelly started to catch the shrapnel.

Under a photo of Davidson and MGK in their underwear, Kanye said: “NO YOU WILL NEVER MEET MY CHILDREN.”

Kanye then took a minute to remind everybody that he would be conducting Sunday Service and then he'd be headed to the Super Bowl with fellow level-headed buddy Antonio Brown and his two children.

He did Sunday Service, complete with brunch -

(For reference- Kanye vows his kids will never meet Pete Davidson, but Antonio Brown is cool)

He went and did Sunday Service and then headed to SoFi Stadium.

During the game Kanye posted a text message Pete Davidson apparently sent to him trying to be an adult about things.

The message read: “…You as a man, I’d never get [in the] way of your children. It’s a promise.

“How you guys [go about] raising your kids is [your business] and not mine.

After finding that he was a trending topic during the Super Bowl he made a post geared at Kim, telling her to “always remember West was your biggest W”.

Later Sunday night Julia Fox deleted all photos of the pair together and headed home solo. She was caught at the airport in tears but denied it claiming she was just sweaty. (Poor girl). Yesterday she confirmed the couple were through and "would remain just friends".

West went back at Cudi: "I'M VERY COMMUNITY ORIENTED I LOVE MY FRIENDS I LOVE MY FAMILY THE REASON I ASKED CUDI TO AT THE LEAST SPEAK TO SKETE IS BECAUSE FOR YEARS CUDI ALWAYS MADE IT SEEM LIKE IT WAS ME AND HIM AGAINST EVERYONE NOW THAT IM FIGHTING FOR MY FAMILY HE NOT BY MY SIDE THIS IS BIGGER THAN MUSIC".

Alongside a headshot of Cudi, West wrote: "I WOULD HAVE NEVER ASKED FOR THE LOYALTY IF IT WAS NEVER OFFERED AND I FOUND A COOL PICTURE CAUSE I LOVE CUDI AND ALWAYS WILL BUT DONDA2 IS ABOUT RUNNING BACK IN THAT BURNING HOUSE I RESPECT NOT EVERYONE GONNA BE READY FOR THE SMOKE".

In the picture Kanye posted earlier saying his account wasn't hacked, he also offered to double Che’s salary, writing, “I’LL DOUBLE WHATEVER THEY PAYING YOU JUST SO YOU DONT HAVE TO LOOK AT THAT PAWN EVER AGAIN BIG LOVE.” Shortly thereafter, the Weekend Update host replied on Instagram with a lengthy list of demands.

You have to scroll right on these because they're pretty fuckin great.

Telling Kanye if he meets his demands "and I’ll Rambo that whole building.” is gold.

Kanye seemed to come back down to Earth this morning. Purging his social media of the tirade he went on and posted this recap seemingly glossing over everything he stirred up over the weekend. 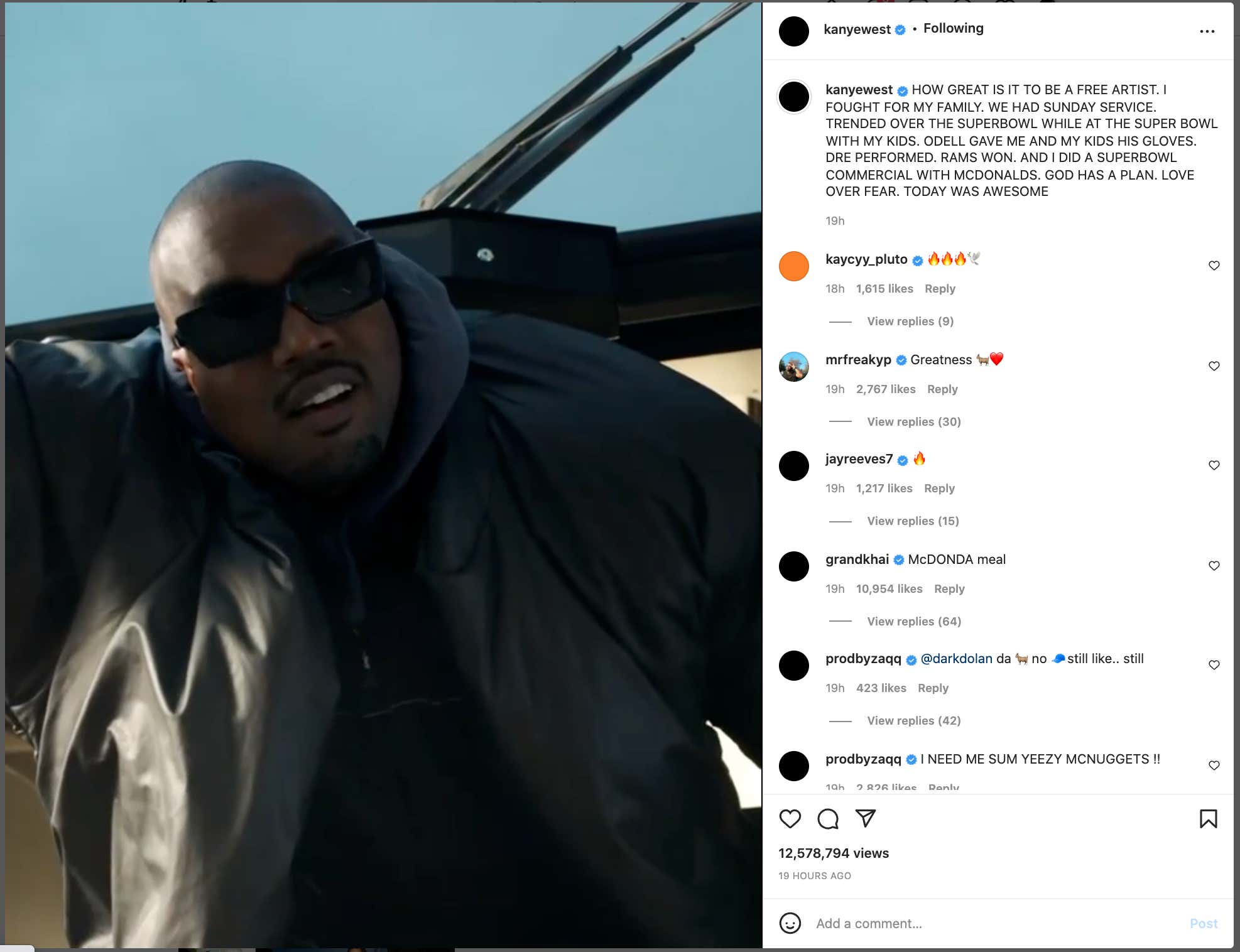 Followed by a VERY awkward Valentines Day post for Kim

And screenshots of their texts… (kinda fucked)

This is clearly a man who has it together. Before you knock him, talk shit, or roll your eyes and call him crazy, ask yourself, "what did you do for your significant other today?"

Did you send them a pickup truck with a message on it and a bed full of roses?

That's what I thought.

Needless to say I can't fucking wait for Donda 2, AND the much anticipated Netflix Doc that's been 20 years in the making. If you're in the Chicago scene you know the directors Coodie Simmons and Chick Ozah and know that this thing is going to be fucking incredible.

You want to talk about vision. These two guys knew from the jump that Kanye was destined for true greatness. And went out of their way to document EVERYTHING from the beginning.

If you're a Kanye fan, are fascinated by what makes him tick, or just a music fan in general this is going to be "can't miss."

p.s. - Ye appeared at his upcoming documentary "jeen-yuhs" LA premiere last Friday, revealing that people were attempting to cancel him and DaBaby. He also claimed that Apple Music offered him $100 million to release DONDA exclusively.

We all need to collectively pray that Kanye does the media tour after Donda 2 drops and hits the Rogan podcast and Drink Champs again to further expound on everything. I NEED to know more.