Pink Whitney was definitely flowing in Vegas last week. We saw Chiclets Cup participants taking it on the rocks, mixed with flat water and soda water but clearly, the favorite was shots. We have all now made it to Thursday and are recovered from the amazing week, so we can treat ourselves to a few shots during the NHL slate tonight.

Crosby, his next goal will be his 500th in his career which is an amazing accomplishment for a player considered a pass-first guy. Playing against Ottawa and his former teammate Matt Murray, Sid will want to get it done tonight. Scoring on an ex-teammate is always fun but his main reason will be to make sure it doesn't become a distraction for his team for more than one game.

Here’s a look at his first goal which by no surprise came from his patented spot on the right post. The best part of the video is Buuuuuggggggsy celebrating on the bench with Mario.

Marner has goals in 8 straight games and you know he wants to keep this streak alive. Normally Marner is the one constantly dishing to Matthews to break goal records, but tonight the entire Leafs team will give Marner an extra look to continue this impressive streak.

If you are reading this blog then you saw the absolute show the Chiclets crew put on in Vegas from morning through night. So the All-Star weekend saw Zegras become a wizard but the biggest upset was the fastest skater…..

An event that was basically handed to McDavid before the weekend was stolen by Jordan Kyrou. He got around the rink in 13.555 seconds which is ridiculous. Wearing no helmet while going that fast really made me feel bad about being scared to block a shot in the Ball Hockey at the Chiclets Cup. Guy has become a legend and will give us another winner tonight.

Let's have a night Chiclets Nation!!  Watch The Sandbagger first then we will cash these 3 Pink Whitney Shots bets and the Spittin Chiclets Boost below to pick up some big profits. Then immediately move some cash onto the Olympic hockey in the early hours of the morning. 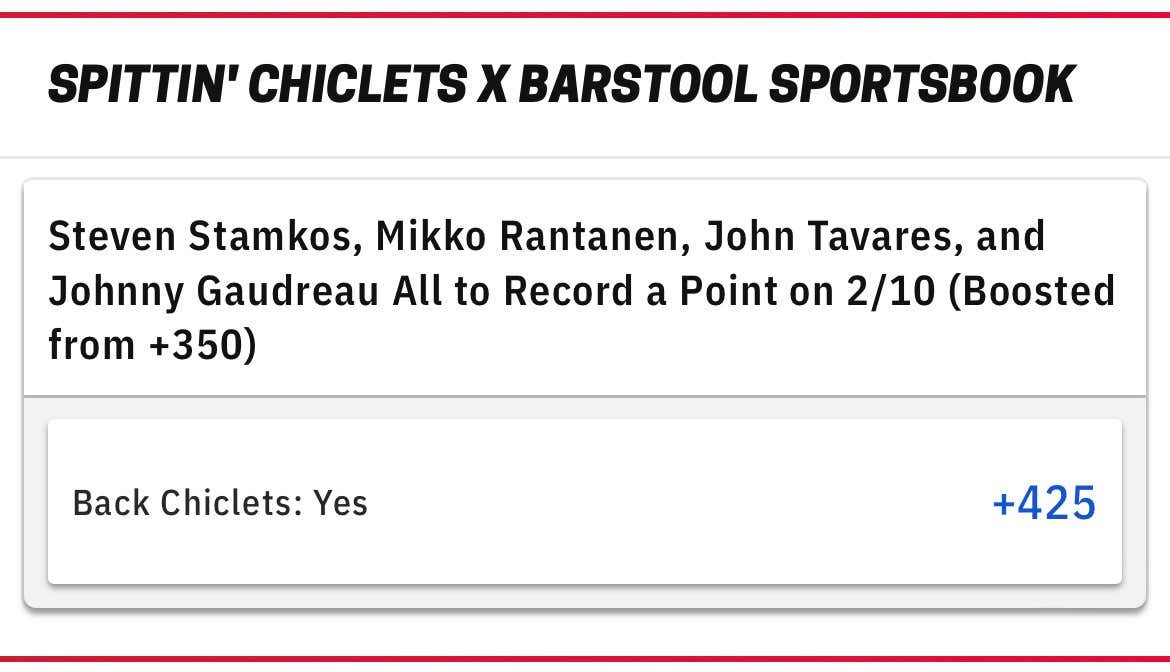