I was in LA last weekend.

However, unlike the rest of the animals who may or may not still be there, I wasn’t there for football, or trivia, or defending Joe Rogan, or whatever this is…

I was there for NASCAR.

So, as everyone was showing up, I was leaving… Happily.

I enjoy the West coast but small doses are always best for me. And, as is always the case, I made sure to map out my meals on the trip.

- On Saturday, I hit the Beverly Hills Hotel for lunch and drinks.

- That night, I did red-checkered tablecloth Italian at Dan Tana’s for dinner.

- Sunday was race day, so we ate at some new service called NASCAR Refuel that recreates iconic dishes from various racetracks.

M&F is an old-school steakhouse, but I went with a new-school crowd… Myself, Devlin, Jeff D. Lowe, and KB.  Eclectic crew, but it worked.

The restaurant itself is dripping with Hollywood history and we sat in the corner booth where Sinatra was once caught finger-blasting a dripping Ava Gardner.

I had the steak tartare, the sweetbreads, and something called Welsh Rarebit… Washed the whole thing down with a couple of martinis and a little vino, and we were home by midnight.

And before you ask, the reason I had those three untraditional dishes, in particular, is because I am an asshole.

But back to what else I ate…

Monday, I had an afternoon flight. So I got up early and met a friend of mine for breakfast.  It was Eric Greenspan, who is a staple on the LA food scene and he does a fair amount of work on the Food Network. 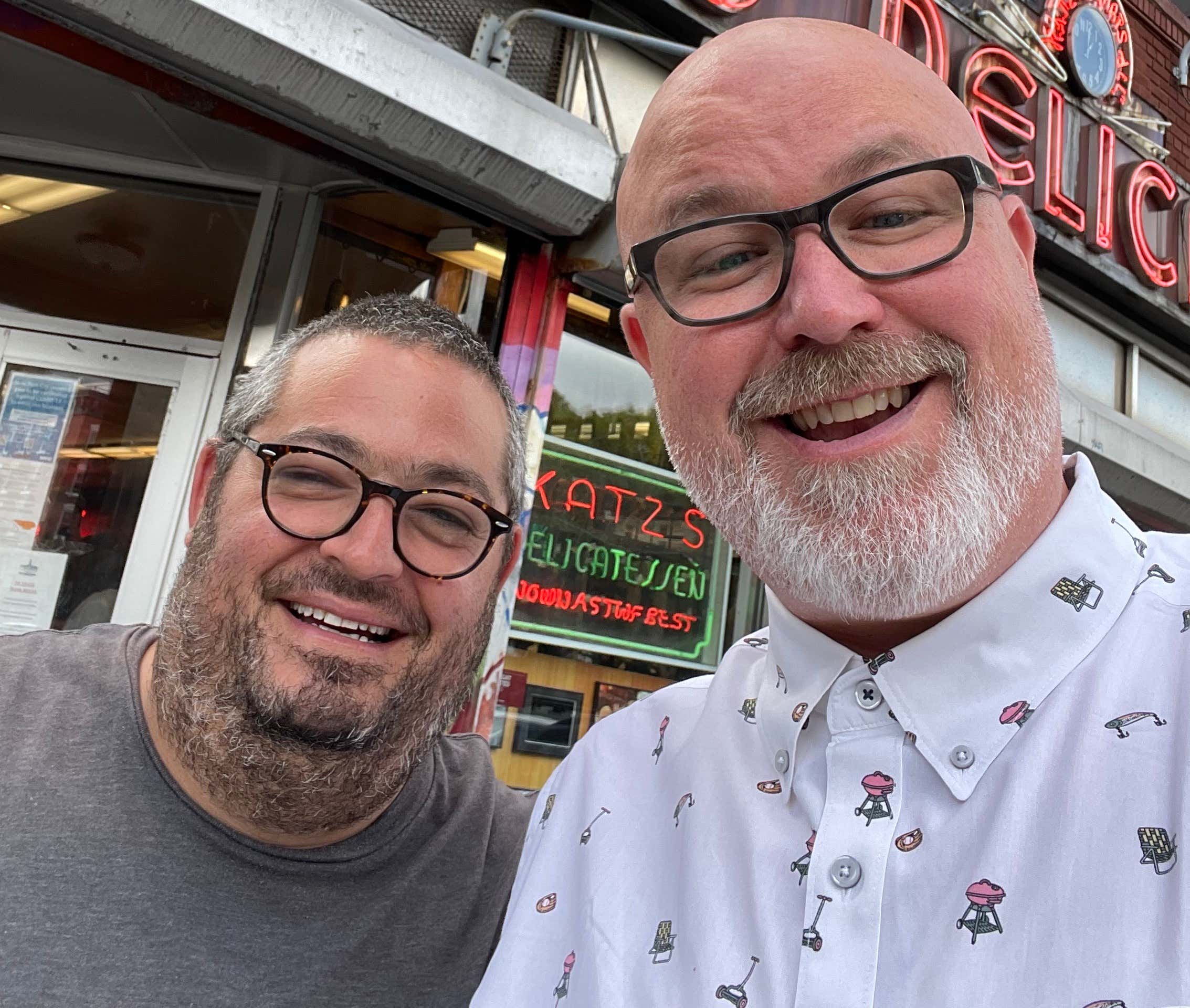 Eric's last time in NYC, I took him to Katz.  So to repay the favor, Greenie took me for breakfast burritos at some joint called Cofax where they do an outstanding pastrami breakfast burrito.

The difference here is Cofax sources their pastrami from a well-known LA spot called the Ugly Drum which uses a hybridized technique on their briskets, combining a bath in a homemade classic Jewish brine for several days followed by Texas-style pit-smoking over low, indirect heat with whole logs of oak and pecan wood for at least 10 hours.

Greenie and I wound up splitting a hotlink and a pastrami burrito and they were both fantastic, but not enough to fill us (we’re fat), so we slid down a couple of blocks to a donut place called Sidecar on Fairfax and 3rd. 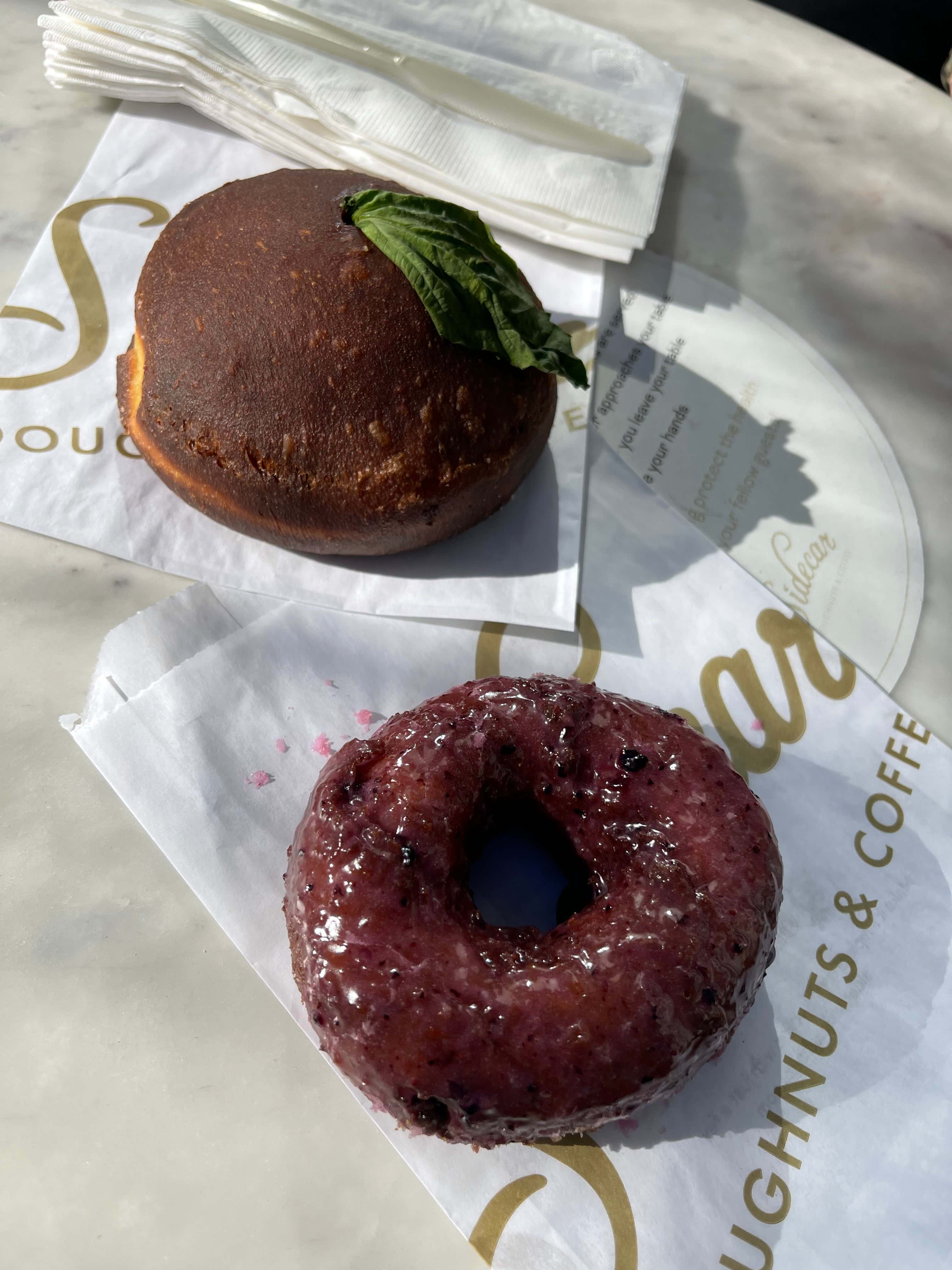 That bottom donut was their Huckleberry, a delicious glazed cake donut.  And when I ordered it, I simply told the kid behind the counter…

But he didn't get the reference, which made me sad.

The top donut is the one I am gonna talk to you about though… The Basil Benedict.

This mother-fucker was next level.

They somehow place a perfect poached egg and some Benton's Country Ham into a yeast donut before frying.  When it comes out of the oil, they poke a small hole on top which they use to insert a pastry bag and pipe that bitch full of basil hollandaise.  They then close the hole with a basil leaf. 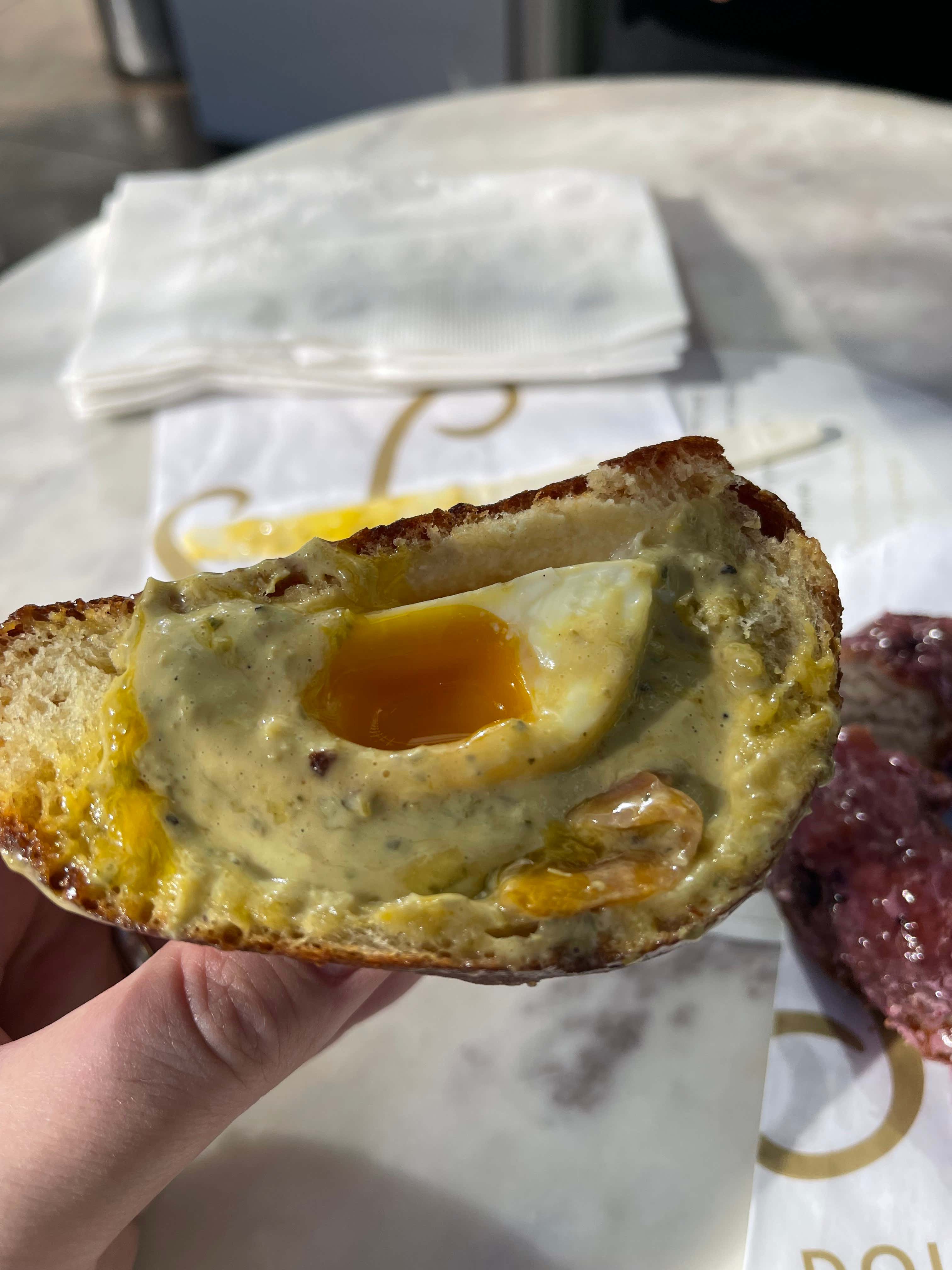 It had that savory-plus-sweet profile that everyone wants in just about every dish nowadays, plus that airy donut sopped up what seemed like an absolute OBSCENE amount of hollandaise.

A United 4:30 PM flight on Monday out of Los Angeles would get me back to Newark at 12:40 AM Tuesday morning, and since Barstool consistently flies me in the cheapest section they can find, I decided to upgrade to Business Class on my own dime.

I popped 50 mgs of 3Chi about an hour before boarding, had a Bloody Mary at my seat, and then fell fast asleep while watching a movie.

Perhaps three hours into the trip, I was awoken by a familiar feeling but in an unfamiliar place… I either just shit myself, or I was about to shit myself.

The reason I was unsure was that I didn't feel squishy in my seat but I also smelled like more than just gas… My little travel pod smelled like a diaper that was recently filled by an infant that was on antibiotics.

And parents will know what I am talking about.

Kids' diapers are bad enough, but you add some sort of medication to that mix, and it makes you start considering a vasectomy or at least saving your wire hangers.

And that is how the area around my seat smelled, and that smell was undoubtedly coming from my lap.

I leaped up in what was now a fairly dark cabin and instinctually made my way towards the back of the plane for some reason… Back where Barstool had me sitting originally.  And when I made it to the bathroom, I spent only seconds wiping down the area of the tiny toilet before whipping around while pulling down my hopefully unsoiled pants and plopping down onto the commode.

It was a desperate time, but I was almost graceful…

Trouble is… I am tall.

So plopping down onto that seat with my pants around my ankles caused my knees to jut out directly in front of me, so I rammed open my own bifold doors leaving a healthy space cracked open for all of the steerage passengers to see me at my most vulnerable.

But nobody saw… Thankfully.  My lavatory faced the window side of the plane, so there were only a few that could've seen me.  And as a couple of heads began to turn around after what must've sounded like a small crash, I spread my legs apart and pulled the door shut immediately. 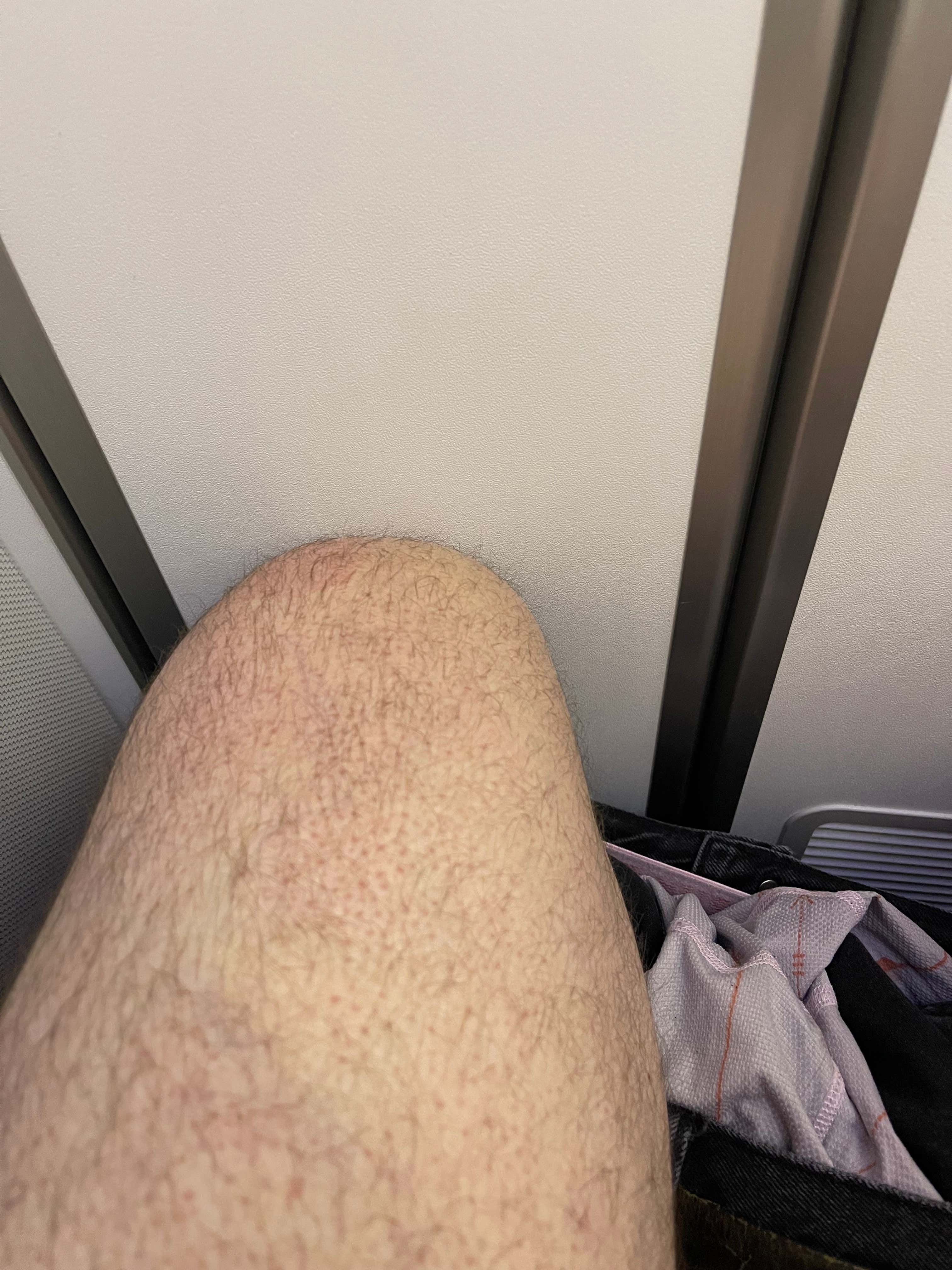 (my meaty thigh and knee)

Crisis averted… Now on to the next one.

Once I was seated uncomfortably with the door locked, I had to look down to see the damage in my pants…

And there was none!

Crisis 2 averted… Now on to the next one.

I was about to shit in a toilet that had an opening too small for my fat undercarriage to do 2 things at once.

So I had to shift back while desperately holding my bowels shut for just another few seconds so I could take a leak, otherwise, I would've gone off like an unmanned firehose mid-dump.

Once I was done pissing, I rocked my body back to position my rectum over the bomb bay doors, and then I released hell.

And it was SUBSTANTIAL.

I took a mental inventory as I unloaded and deduced the period of 24 hours before I got on that plane contained:

And all of those things, at the same time, decided they wanted out… 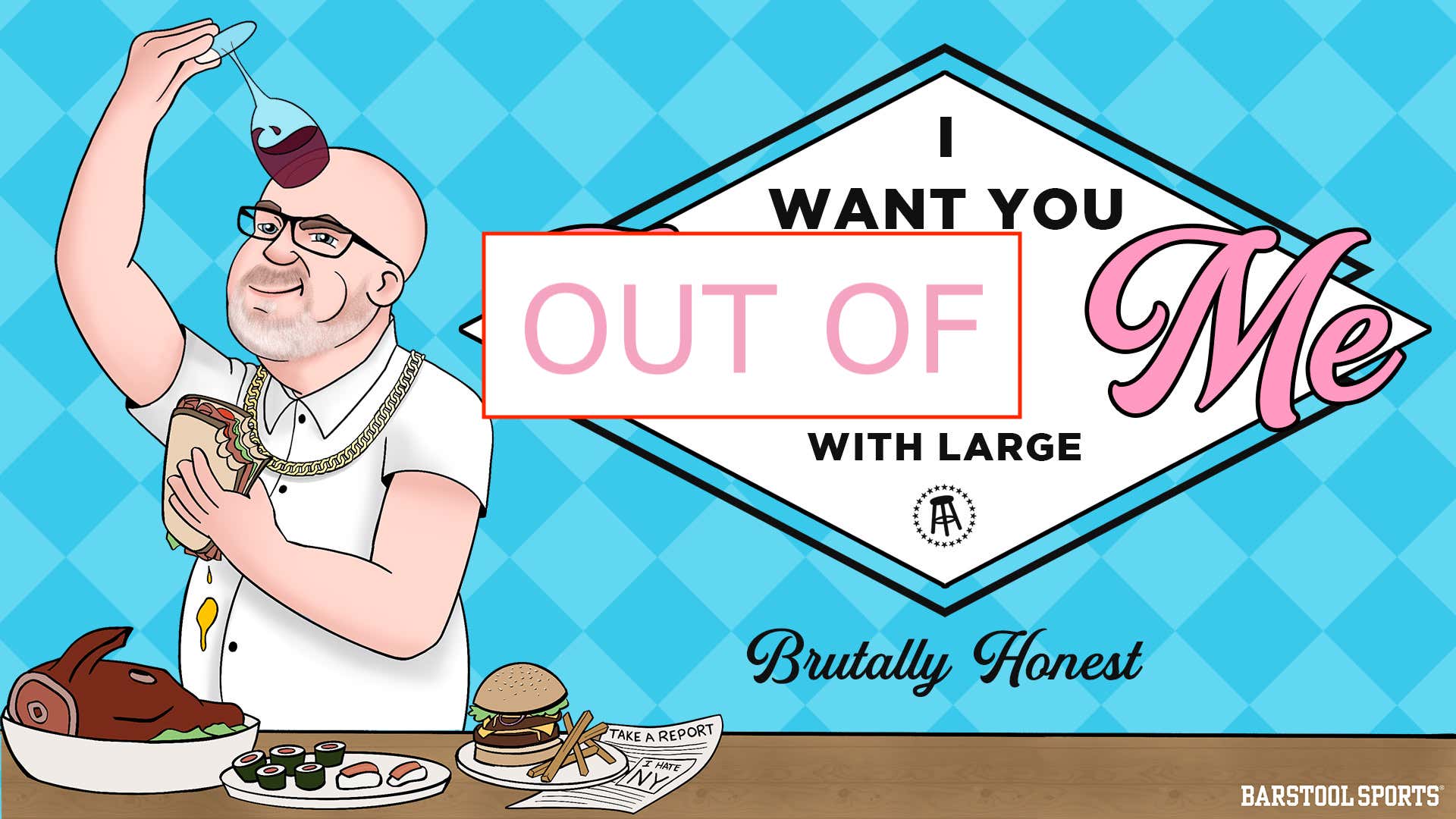 I crossed that line between bowel movement and exorcism almost immediately and thanked the Lord that my plane was relatively empty because after I was done, I spent perhaps another 15-20 minutes cleaning the crime scene.

I am 50 years old, but it was my first time using an airplane bathroom, so the whole process was a puzzle I was solving for the first time… Perhaps that does not seem like a big deal to most, but shifting all 300 pounds of my body back and forth was like a perverted game of Twister… Except I was solo and navigating through a tornado of shit.

So playing Twister in a twister?

When I finally exited that WC, I was met by only a few sets of judgemental eyes… But I found them amazingly easy to ignore as I sauntered back behind the curtain to Business Class a few pounds lighter and a whole lot happier.

I am back on the road for NASCAR next week… I will be at the Daytona 500 along with Spider, Glenny, and a handful of other content people TBD.

As luck would have it, Chef Greenie will be there also, so I weep for the poor bastard who is seated outside of the bathroom on our flight the next day because I am now a seasoned veteran, and Glenny and I seem like a formidable tag team of shit.