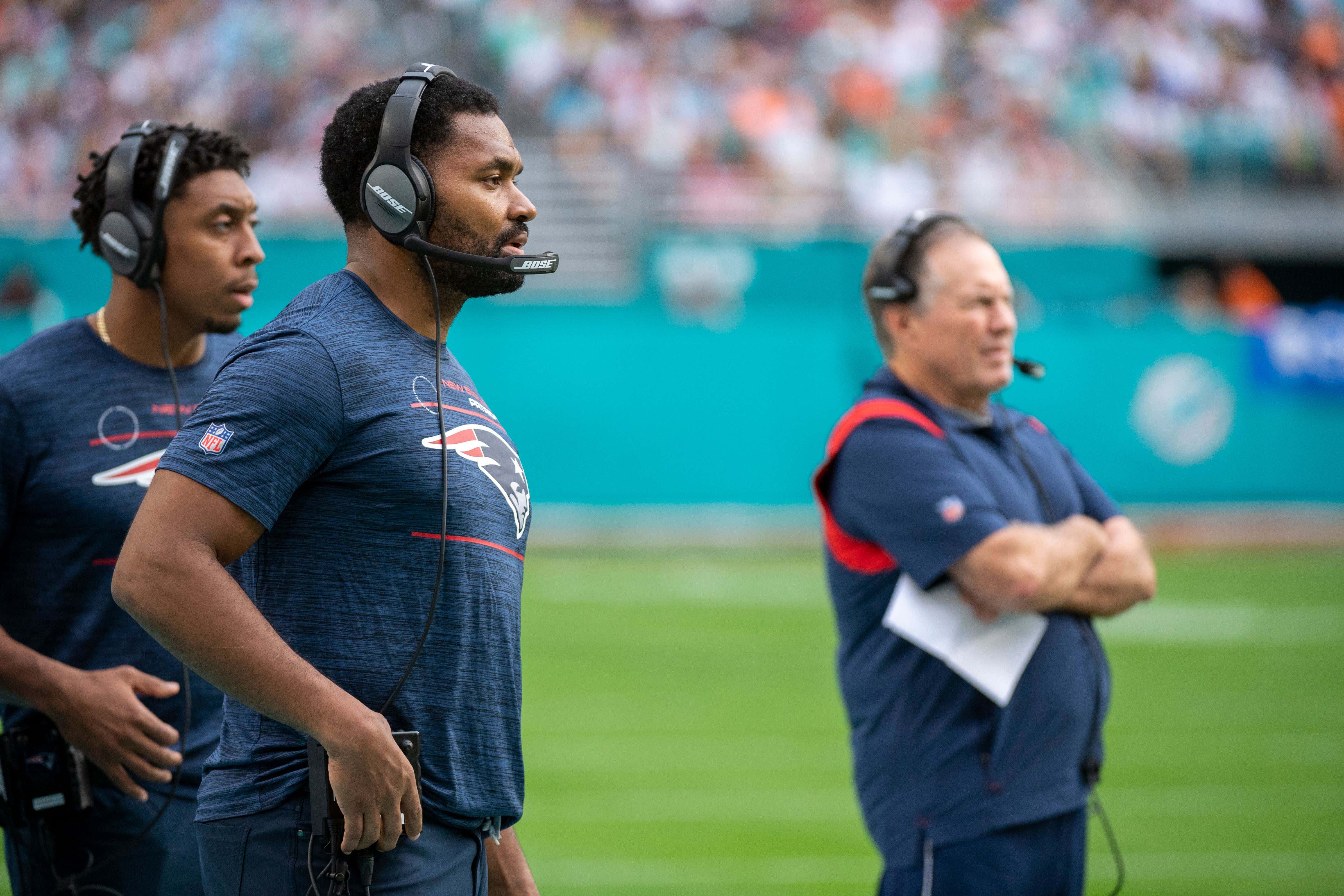 Patriots linebackers coach Jerod Mayo is making the media rounds this week as a promotional tour for his Super Bowl commercial for Hellmann's, featuring him and Pete Davidson. I'm happy for Mayo he's getting the national attention he's deserved since he won the Defensive Rookie of the Year in 2008 and made All Pro two years later. I'd post post the ad here, but they're not paying me to, so let them do their own bidding. Besides, I actually resent the fact a guy of his name and his stature would have to wait 14 years to get a mayo endorsement deal. Plus it's pretty much a direct copy of Terry Tate, Office Linebacker. And he deserves something original.

Those issues aside, Mayo went on The Sports Hub's "Zolak and Bertrand" a little while ago and said all the things New England needed to hear.

First, he made it clear that, while he has big personal career goals and has had job interviews to try to achieve them, he'll be back on the Patriots sidelines in 2022:

"I am a New England guy. My family’s here, everything’s here. So, for me to pick up my family … it has to be a great, great opportunity, not just any team. …

“When people ask me, ‘Is your goal to be a defensive coordinator?’ That’s not my goal. My goal’s not be a defensive coordinator. My goal’s to be a head coach. My goal’s to work across the team, when we’re talking about offense, defense and special teams. Because that’s what I enjoy — I don’t just enjoy defense. I love it, but I don’t just enjoy defense. I enjoy the game of football. I enjoy learning from different people, and I also enjoy the personnel site. Bill [Belichick], over the last couple of years, has given us more time to spend with the scouts which has been beneficial for me.”

Next, on the dismal performance of the defense he assistant coaches. Particularly against versatile schemes:

"Were there times where it did look like we got soft? Absolutely. Some of these teams, they put you in predicaments as far as run-pass conflicts. … But, overall, I would not call us a soft defense."

On what they need to become good enough to stop said versatile, run/pass offenses:

This is exactly what we should be hearing right now. Beginning with the fact that this mortal lock to become a head coach in this league sooner rather than later is here for another season to get this unit back to the top of the league.

Second, with this inside information that Belichick has adjusted his methods over the last few seasons. That he's taken a broader, more holistic approach to his operation. The entire staff, from the assistants to the scouts to himself, interacting more so that they can provide one another what they need. Which underlines what we saw in the War Room last May, with GM Bill going around the room to confirm their first pick, is the way business is being done:

Also, that the people making the decisions are under no delusions of what they need to do to get back on top. To hear Mayo tell it, they're not panicking. They understand they have a good defense. But good is never good enough here. The standards remain as high as ever. They need to get faster. But only when it's speed mixed with versatility and football intelligence. They need to get faster and more explosive, but with true playmakers only. They're not going to stop Josh Allen with a bunch of trackletes. It's going to just be about 40-times at the Combine like Al Davis is walking the field with a stopwatch around the collar of his nylon tracksuit.

That should be a symphony for the ears of anyone who watched them get emasculated in Buffalo. Fortunately, the Senior Bowl was a Golden Corral buffet of talent on that side of the ball and at all levels of a defense. Much of which will still be on the board in the second half of the first round and beyond. From defensive line (Perrion Winfrey) to edge (Jermaine Johnson) to linebacker (Devin Lloyd) to cornerbacks (Kaiir Elam, Trent McDuffie) to safety (Jalen Pitre). But there's plenty of time for that later.

For now, let's just be glad Jerod Mayo, who was essentially a coach from the first time he lined up as a rookie, has at least one more season under the headset in Gillette. And he - like everyone else in the building - is taking their problems head on. I suggest we all put an extra smear on our lunch today in his honor.