The man knows how to entertain! The man knows how to coach! I missed this. I truly did. We know the shit that happened last year and we had a neutered Coach Cal. The sport is better when Coach Cal is doing this shit. Ranting about the No. 1 picks he's had. In a good mood after moving to 20-4 and in a prime spot to get a 1 seed. This is what makes college basketball great. When Kentucky is great (95% of the time) we get the most polarizing coach in the history of the sport either pissing people off or making people happy. I choose happy tissues.

This is obviously all about Shaedon Sharpe and the decision of him not playing this year. Obviously there's a chance he leaves for the NBA, where he's going to be a top-10 pick if not higher. Hard to pass up millions of millions of dollars. I'd like that decision one day. But we're talking Cal. There's no one better at 1) getting guys to the No. 1 pick and 2) selling Kentucky than him. Look at this face. This is the face that haters have nightmares about. 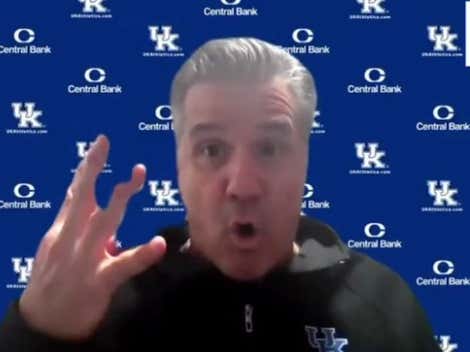 That's the man who goes into your town and beats your team. That's the mean who is the head coach of the No. 2 team in KenPom and No. 5 team in NET. That's the man who completely changed in one offseason when he realized he had to. Now we're getting vintage Cal rants and the sport is better off because of it.

God I missed this shit. Don't ever stink again, Kentucky.