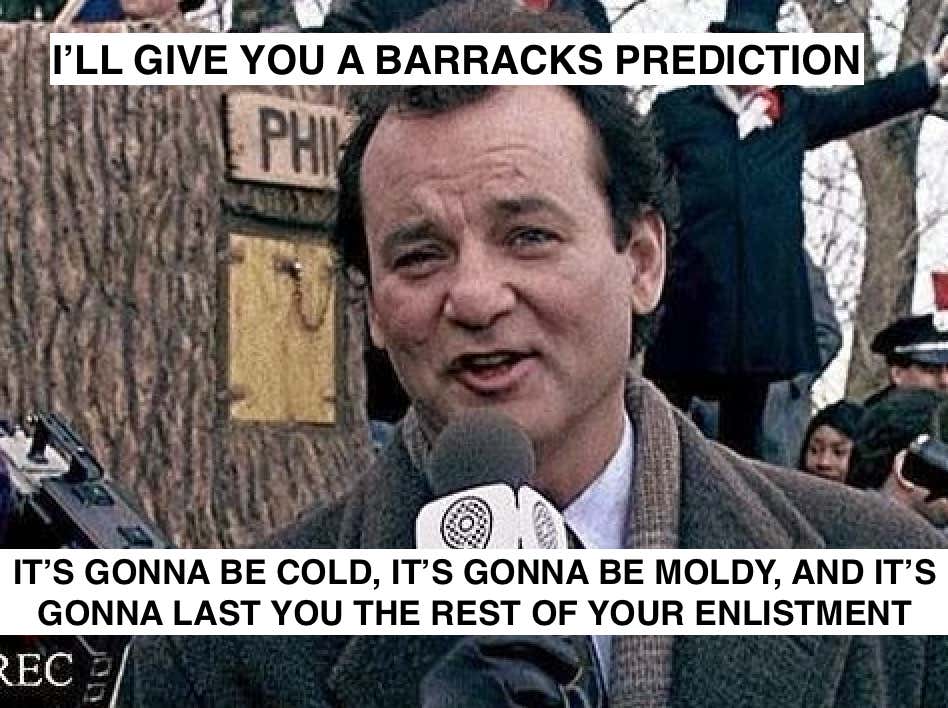 It feels like every month or so ZeroBlog30 covers a story about horrible living conditions on military bases. It's our podcast's Groundhog's Day where the toxins might change, but leadership shirking accountability never does.

Poisonous jet fuel in the water, higher rates of cancer, children sickened by lead, barracks with asbestos, mold, and rodent & insect infestations, 'slum like' conditions thanks to privatized landlords (shout out companies like Balfour Beatty who got caught raking in bonuses while falsifying records that left troops in the lurch), lack of basic tenant rights that most regular civilians get, etc. I could go on.. Often times terrible housing is an open secret that troops & their families suffer through until they finally snap & leak photos & stories to social media, reddit or the press.

Here's a PowerPoint slide from the Military Base Barracks & Housing Leadership Course For High Ranking Officers (simply known as MBBHLCFHRO) that shows how they handle the PR on this issue & why it keeps happening: 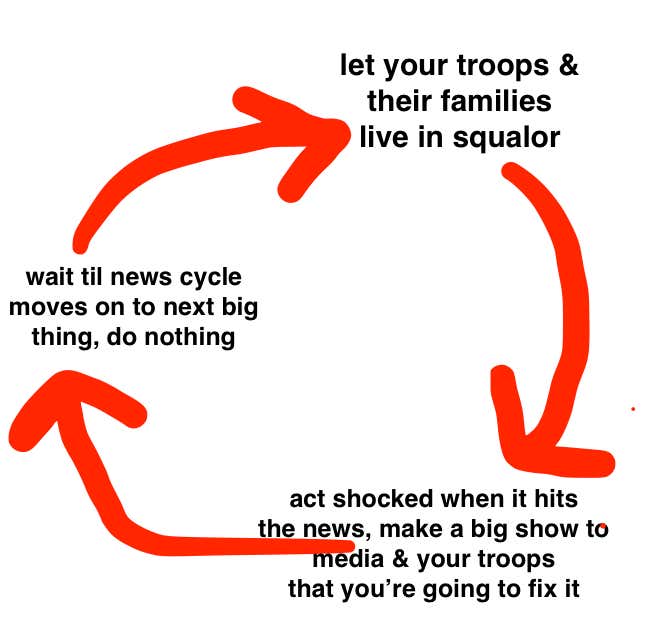 You'd think by now I'd be used to that cycle, but this latest one happening down at Naval Support Activity Bethesda (home of Walter Reed Hospital) is so bad I can't stop thinking about it. It first came to ZBT's attention this past Saturday when a troop living in the barracks for wounded, injured and ill service members sent us a Navy Times investigation.

Yes, you got that right: 'wounded, injured and ill' service members were stuck living in fucked up barracks (yet again), as were fellow troops who also work at Walter Reed Hospital caring for our best & bravest.

From the Navy Times:

Hundreds of junior-enlisted sailors and soldiers have gone for years without hot water in their barrack rooms aboard the Maryland Navy base that is home to the Walter Reed National Military Medical Center.

Others have been left to broil in barracks with broken air conditioning during humid mid-Atlantic summers, or been assigned rooms without working fridges, thermostats or even locking doors, according to sailors who spoke with Navy Times and who voiced concerns to base leadership during a townhall meeting Thursday.

Navy leadership is moving more than 350 service members out of barracks that had been without hot water for years aboard Naval Support Activity Bethesda, the Maryland base that houses Walter Reed National Military Medical Center.

Naturally, the two barracks were named Comfort & Sanctuary, though troops could find neither after a long day of mentally & physically taxing hospital work when they wanted to get a hot shower to wash off the germs & grab something out of their fridge. And imagine having a job where you have to shave really well every morning & not having hot water. Razor burn = opposite of Comfort.

The details, firsthand accounts and excuses get so much worse and we cover them all on this latest episode. You can check out that 20 minute clip HERE:

On Sunday Chaps followed up with the person who initially messaged us & asked what's been happening since the Navy Times investigation came out. It seems to be another dog & pony show. You can tell how frustrated the person is because they're not even asking for the bare minimum but, knowing how this usually goes, they still can't bring themselves to have faith things will change. A lower-enlisted tale as old as time. 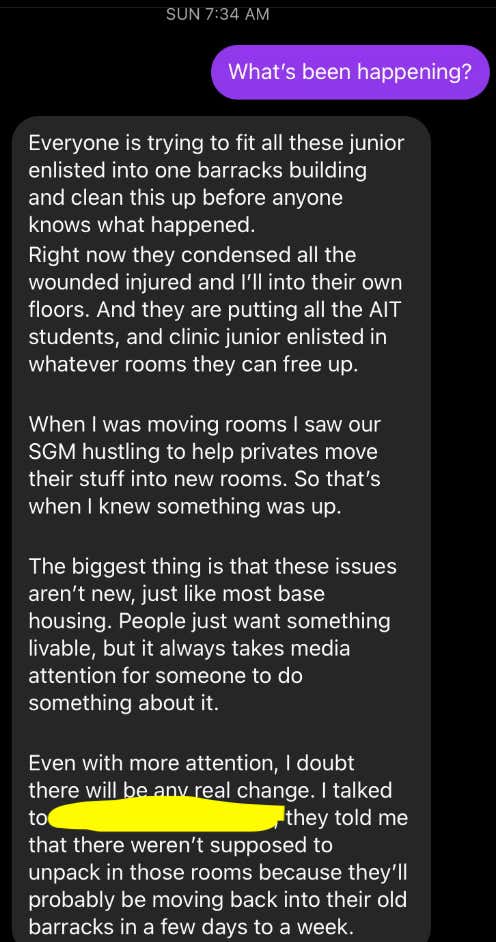 Worth noting, there is good military housing out there (if you rank high enough, heh heh), but there is still faaaaar too much that is unacceptable. When we went to visit the Air Force Academy I was legit taken aback by how old and decrepit their rooms were. Some of the furniture was so old it was falling apart. If you are serving this country you should not live in an asbestos filled barracks (like I once did, woot woot), or have to worry about your children being poisoned while you're off training, or get off a long day of work and feel absolute dread on your way 'home' because your morale is crushed by depressing conditions. For the life of me I do not understand why this continues to happen when we have the money for 20 year quagmire war goofin' & F-35s.

I think part of it is because of the attitude I often see in comment sections on stories like this. So many of us accept it in the moment because, well, "the military is supposed to suck". This is evidenced in all the hardo old-timers you see grumbling.

"Well when I was in our barracks was only a dirt floor covered in fire ants holding tiny knives and not only did we not have AC, we didn't have windows, and it was on fire and we didn't mind 'cause we weren't pussies and ya'll crying about some little itty bitty mold spores is why we lost Afghanistan and…"

Buddy, it was just as wrong when you were living it, too. Living with a little bit of hard earned dignity is not being 'soft'.

If you're a leader out there and you want to win over your troops (because I know high ranking officers are a huge Barstool demographic who will totally hang on my every word), make sure they never have to deal with this shit. And if they are, that you stick your neck out & put it all on the line to cut through the red tape & fix it RIGHT AWAY. Now if you'll excuse me, I gotta make a head call.