On Friday night, I was sitting around minding my own business thinking how I want to punish my body in the coming 3 days. Standard night en la casa de WSD when I received a notification that people were talking about me on KFC's pints thing:

I was mid-bite of a delicious Mayan Palace steak burrito suizo and almost choked to death I was so disgusted at the lies being spread against me. Are you fucking kidding me Sydnie? You bring up your little tummy ache on a public platform at my expense? Fuck outta my face. This is going to be a long blog because I cannot let someone slander my immaculate name, which is what little Sydnie's doing here.

Let's go through some facts:

- The thumb lick can be seen on Stool Scenes last week at 2:15 minute mark:

The thumb lick was AFTER I plated her food. I didn't lick my fingers and touch her food. Not that it's a big deal, people share straws, shake hands and stick fingers in assholes and in Sydnie's case, DISEMBOWEL ANIMALS all the time. I watched her scoop shit-filled intestines out of Carl's dead carcass shortly after I put a bullet in her brain. She didn't bat an eye. I'm pretty sure she can handle a small finger licking that didn't even come into contact with her food.

Also - we haven't had paper towels in our office in WEEKS.  I had been using a regular hand towel all morning (that I eventually threw out because of it being near raw meat) while grinding the venison, and it was soaked in soapy water and no longer capable of getting shit off my hands. I washed my hands a solid 10 times with dish soap and water prior to handling the meat.

There was no raw venison on my hands when I did the lick. It was after everything was done being plated. I'm a scumbag, I'm not a savage.

2. The meat wasn't handled or stored poorly by us, it was handled and stored how Sydnie told us to handle and store it:

- We followed Sydnie's orders to a T on this part. I killed the deer (not Chief) and we brought it back to her house. She gutted it, her dad cut the meat out, packaged it, and they explained how to handle it. She told us to try to keep it outside at 42 degrees if at all possible for 3-4 days. This is so the venison "ages" so it's tender and delicious come time for eatin'.

We didn't have the luxury of keeping it temperature controlled, so we kept it on Chief's deck in 35 degree or less weather in an ice cooler filled with meat. I checked in constantly with Ryan to make sure he was keeping a good eye on it because I didn't want to waste any meat. He did.

When we got back to Chicago, I immediately ordered a kitchen aid grinder for the meat. That fucking machine cost me about $450!!! Insane. Not part of the story, but it wasn't a cheap appliance. Anyways, the grinder arrived in 3-4 days. The exact amount of time Sydnie told us to leave the meat on ice outside to age. Once I got the grinder, I picked up the meat from Chiefs, went to the office, and chopped it into smaller cubes so I could grind it. If I didn't grind any of that meat, it was placed in zip locks bags and thrown directly into the freezer, which it's been for the last few months. It was never once frozen, thawed, frozen again, or re-frozen blah blah blah.

It was killed, processed, placed in an ice field cooler in zip lock bags, and then frozen by day 4 of having the meat. If anyone wanted to eat the meat, they were welcome to it. I cooked it 3-4x for 12+ people and gave a lot of it away. If I wanted to cook any, I would take it out of the office and place it in the sink to thaw out for a few hours, but not completely thawed, Kitchen Aid says their grinders work best if grinding partially frozen meat. If that's a weird move, I'm a weirdo. My family has been doing this for thanksgiving with turkeys thawing out in the sink for years on end. It would be news to me that that's weird… but that's why she got to the office and it was in the sink.

Sorry for being hospitable.

3. Sydnie is the pro here. She said in KFC's Friday night thing that she thought it might have been bad. Ummm wtf Sydnie? Chief and I went hunting with you because we thought it'd be funny that a PRO HUNTER (like yourself) took a couple of idiots like us two out to handle guns and shoot things for the first time in our lives. We CLEARLY have no idea what we're doing here. You've handled deer meat 1 billion times in your life… if you thought there was ONE IOTA of a chance that meat was spoiled, you should have told us. Not let an entire office eat potentially bad meat.

So either you're lying and know the meat wasn't bad, or we can't trust your hunting capabilities anymore. Either way, not good… and I think we can all agree on this point regardless. At least this point cannot be argued, while the other couple of points aren't provable.

Oh and btw, like I said, a dozen or more people have eaten this batch of meat as recently as me yesterday when I made a bolognese sauce with it. This is a text message from Chief I just revceived today, 2/7 as I construct this blog: 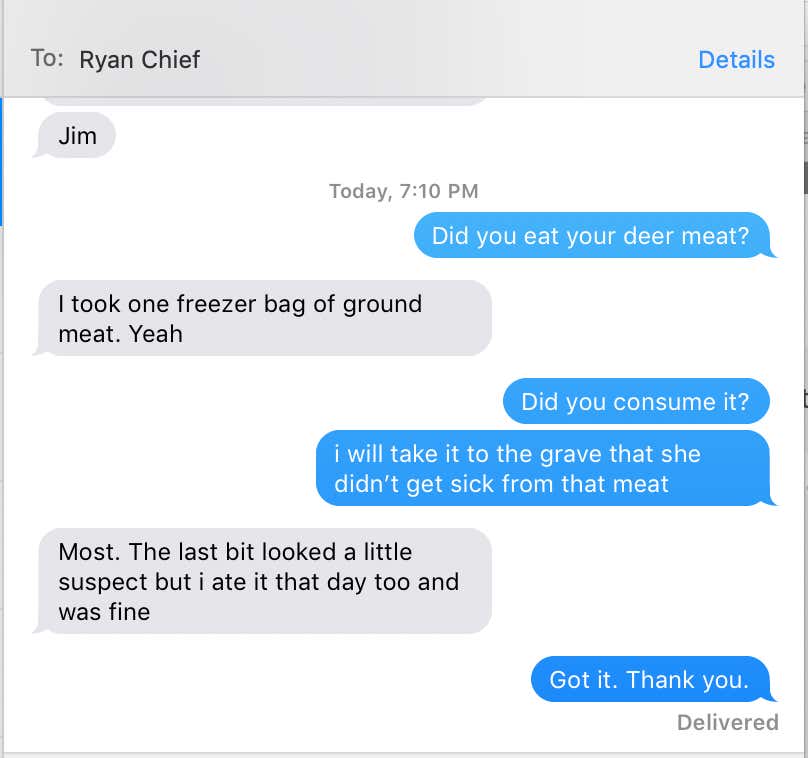 Sydnie ate her burger over a week ago!!!!

Not one other person has said they've so much as burped from it other that Sydnie. Think she might just need to take a mydol

4. Sydnie and I have been laughing with each other on the side about this. That said I will take it to the grave that that meat wasn't what made her sick. No shot in hell. It was handled exactly per her instructions. I'm an idiot but I'm not gonna grind up dead Carl's in the office all willy nilly without being safe. That's how pandemics start. Can't wait to kill something else with her