Warning, this is not a Glenny Balls OnlyFans blog, but there will still be some vulva & vagina dropped in here. Print the merch! 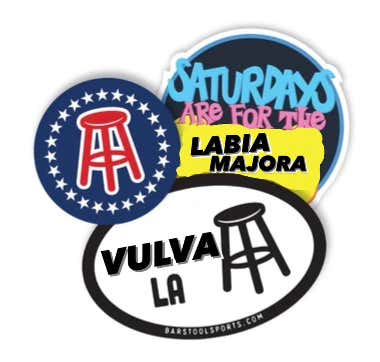 Back in the day Us! Magazine had a section called, "STARS - They're Just Like US!"

It featured paparazzi photos of celebs doing the most mundane, soul sucking stuff like waiting in an ATM line in the rain, taking a parking ticket off their windshield, public ugly-crying on the phone… Shamefully, I loved it. (Still do, tbh.)

As thee most slightly below average, vanilla-lifed person on the planet I found it oddly comforting that even the glamorous elites of this world had to embrace the same general crap of life that I did. Margot Robbie looking dead inside while pushing a shopping cart? Put it directly into my veins.

I get it, Margot. I, too, have walked out of a crowded Trader Joe's totally demoralized. You and me are the same.

All that's to say - Imagine my delight this week when I saw a story about one of the most beautiful women on the planet being terrified of her own vagina after giving birth. So much so that she had to have her best friend take a look because she couldn't bring herself to do it:

Brooklyn Decker is shouting out a loyal friend for helping her out with an uncomfortable task after childbirth.

In this week's episode of PEOPLE's podcast Me Becoming Mom, the 34-year-old reveals the job she asked one of her friends to do after she gave birth to her first child. Decker is mom to son Hank, 6, and daughter Stevie, 4, with husband Andy Roddick.

"My best friend came that day [I had my son] and she at that point had not had children. And I'm like 'Jen, I can't look at [my vagina] because I think it'll traumatize me forever but I need someone to take in what's happening down there,' " she tells host Zoë Ruderman, Head of Digital at PEOPLE.

"And I took her to the bathroom and I literally bent over and had my best friend just take a physical record of what was going on so someone could tell me what was happening. Because so many people had commented on like stitches and this and that," recalls Decker, who has teamed up with Bodily, a resource for all things women's bodies and maternal health.

"And she's like, 'Okay, yep it's seared in my brain. There's a physical record.' And yes, now she has to carry that with her the rest of her life. That's friendship right there," she says.

Now, when I say "imagine my delight" I'm not saying I'm happy she went through it, but I related to it so hard that like… 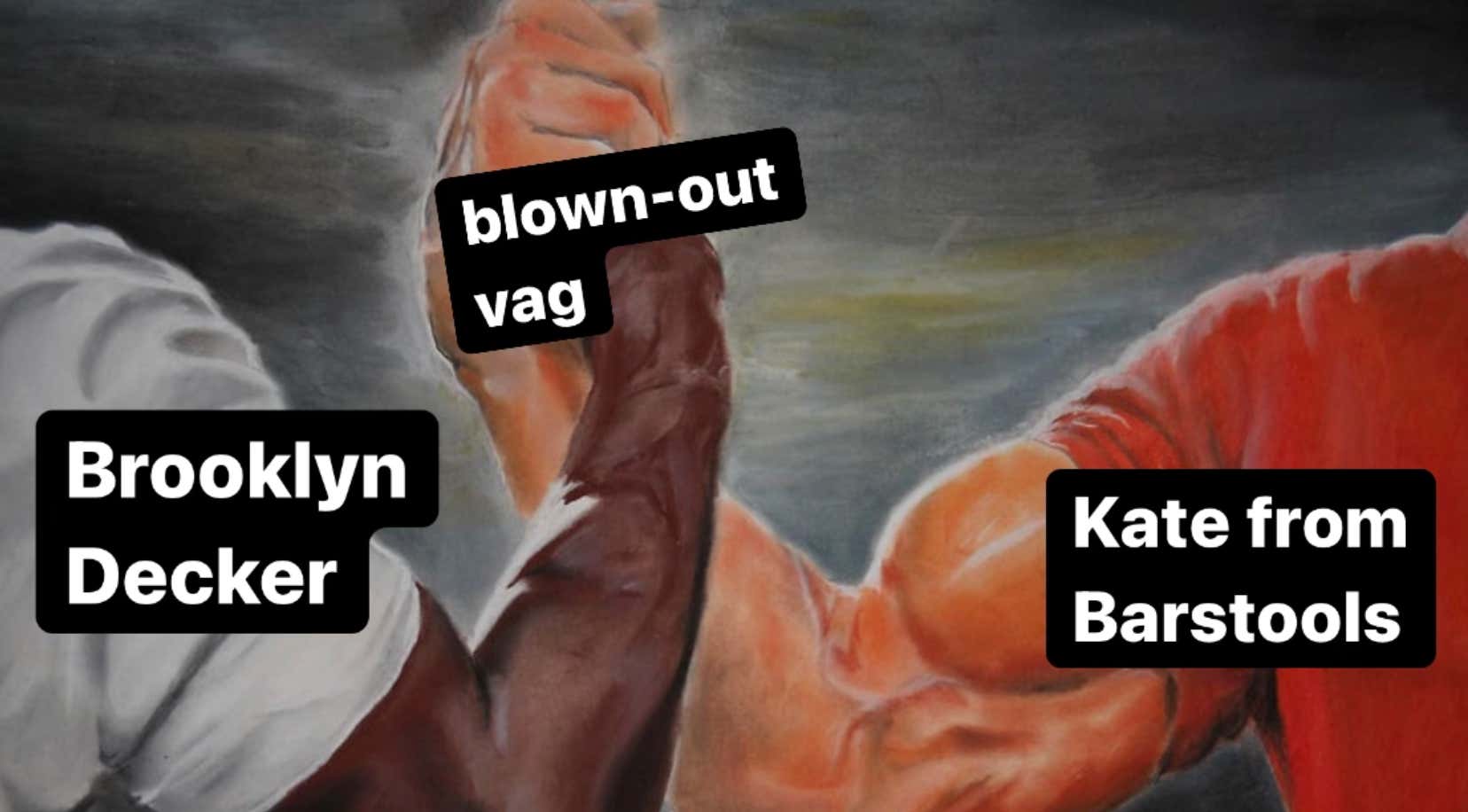 I am pretty much Brooklyn Decker now is all I'm saying.

Hard to tell who is even who…

This was me 6 years ago. 1 week after I gave birth to my son. So much blood. So much bruising. Pads and wipes and mesh underwear galore. I was a zombie. It was a shocking experience and not at all unusual.. the reason it was so shocking is simply because I wasn’t prepared. No one really talked in depth about the challenges of childbirth recovery. So I started making homemade kits for my girlfriends listing out all the gory details….

This was me 10 months ago. 1 week after I gave birth to my son. My camel toe had become a hippo's mouth. My vulva was pluffier than the buttcheeks on the Spider Man float at the Macy's Thanksgiving Day Parade. I was a stunned gargoyle. It was a shocking experience and I was not prepared. No one talked to me about recovery.

The only exception was Pat's friend's awesome wife sending me her own kit of sorts with all the post-partum vagina care items she'd had leftover from her own birth. It was eye opening. I stood there going through the box like, "Uh, wait… whaaat the heck is this about?"

There were massive ice pads you put in the freezer and then into your underwear to ease the pain, adult diapers for all the blood & fluids (and my God there was so much blood and fluids), peri-bottles so you can gently spray yourself off instead of wiping, laxatives because shitting feels like giving birth all over again, Dermoplast numbing spray for those first few nightmarish poops.. the list goes on. Had she not sent me that stuff I would have had nothing on hand to help. And thank God she did because hooooo-ey would I need help.

The first time I peed after getting mobility back & the catheter out (#epidural), I delicately tried to 'dab' wipe and discovered that my vagina was ON FIRE and so swollen I literally gasped. Picture an actual, regulation size NFL football cut longways and put over your crotch. Like that's how big it was. It was so unexpected and startled me so badly that weird tears of shock came to my eyes. I had no idea that was normal & quietly but urgently told the nurse as soon as she came in the room. 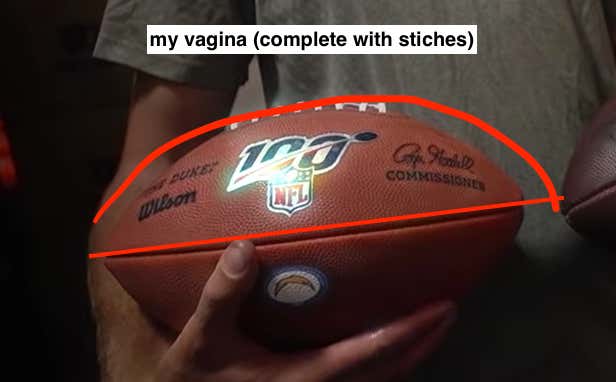 When I finally showered in the hospital I remember hunching over because I was terrified of even water hitting that area directly. On top of that, and I've mentioned this before and I'll probably talk about it forever so sue me, I tore pretty badly. As much as I joke around, it had been a genuine fear I'd built up in my head beforehand and that it actually happened was really upsetting to me.

I'm lucky to say the birth itself was incredible and so wildly joyous, and I'm so grateful the most important part - the baby's health - was good. But in hindsight, knowing the pain I had afterwards, I have a hard time watching the video Pat took of those first magical moments now. If your focus strays from me and the beautiful baby freshly placed on my chest, you can see the doctor in the background stitching me up with what looks like two big sewing needles.

Her gloves and sleeves are drenched in my blood and there's some big-time tugging and pulling going on. I'm not saying she did anything wrong, but it looks more like she's tightening a corset than piecing a rip in the most sensitive part of my body back together.

Maybe she heard my smoker's voice and was like, "Oh this lady has seen rougher." Fair enough. I even forced myself to watch that video again before finishing this paragraph to be sure I wasn't just remembering it wrong and yeah, my stomach is in knots all over again. I usually hold my thumb over that part of the screen. If there's ever a 'next time' I'll be asking Pat not to do a wide shot & just keep it tight on the baby.

Speaking of, you're supposed to wait 6 weeks to have sex again. Buddy, I was not even CLOSE by 6 weeks. I was still afraid to feel around in the shower to see what was going on down there at 6 weeks. I still broke out in a cold sweat when I had to take a dumper at 6 weeks. Could have used a brave friend like Decker's to take one for the team and tell me what was going on. Pat offered many a time (BONK) but I was afraid whatever was going on would kill his boner forever. (Narrator: nothing can kill the boner of a man with a mullet and body hair like that. He would not have cared no matter what was happening.) Basically, I was afraid of my own body afterwards and I wish I'd been more informed because I felt like I'd never be the same again.

Well I'm rambling now, as per usual, but I got the importance of Decker saying she sends letters to her expecting friends with all the gory details, and maybe this is my version of that letter. Not meant to scare anyone, but I would have liked to know how rough it was going to be; To be more mentally steeled for it, to be more informed and thus less afraid of what I was experiencing post-partum, to better prepare Pat for how to help, etc. And it feels dorky to say out loud, but I'm grateful I stumbled across that story about her 'friend looking 'down there''. You only ask for that kind of favor when you are freaked the fuck out. And for whatever weird "Stars - They're Just Like US!" reason it helps to know I wasn't the alone freaking the fuck out.

In closing, everyone is different. I see TikToks where women are like, "Holy dang! I'm prego again 5 weeks after giving birth?!" And where others who didn't even medicate during birth were like, "I barely felt a thing!". But thanks to folks like her speaking out I know I wasn't making it up in my head, or being dramatic: It is fucking HARD and it HURTS A FUCKING LOT and if you're reading this and you relate to it at all welcome to the club. We're basically Brooklyn Decker now. And -Paul Rudd voice - look at us, would you look at us? We're doing great now: