Truth be told, I've barely left my apartment all weekend. I recently got a PS5 for my place and I haven't been able to stop playing FIFA. I wanna make the most dominant Ultimate Team and I'm not even close...the more frustrated I get at the game, the more I can't stop playing.

For the people that have played FIFA before, you know it's the most infuriating and rage inducing game of all time. I don't think there's really a close second besides maybe Madden. Maybe.

Amidst all the rage however, there's this deep rooted feeling to keep playing the game. It makes absolutely zero sense, but that's the beautiful thing about FIFA! At the end of the day, it truly makes no sense.

I started playing FIFA a long time ago, when one of my boys brought FIFA 12 to my parents house and introduced my brother + me into the cruel world of virtual soccer.

From that day we ended up buying the next FIFA, grinding Ultimate team each year and the rest is history.

For those that aren't familiar with Ultimate Team, think about it like your own virtual fantasy team except you are using the players in game. AKA, you're building a true "Ultimate Team." You can acquire players through opening packs (which costs $$$) or on a transfer marketplace and buying them with in-game coins.

Back in the earlier FIFAs (14-16), Ultimate Team was fairly straightforward. You tried to get the best possible team of current players and if you were so lucky, you might be able to afford Ronaldo, Messi or an Icon like Pele.

However, today's Ultimate Team is a different world. New cards are being introduced all the time with all these crazy ass colors and cards, meanwhile the old way of getting Gold rare cards will leave you utterly embarrassed on the pitch. You won't be able to compete.

So, in order to get try and compete this season in FUT - I'm trying to build an unstoppable team. 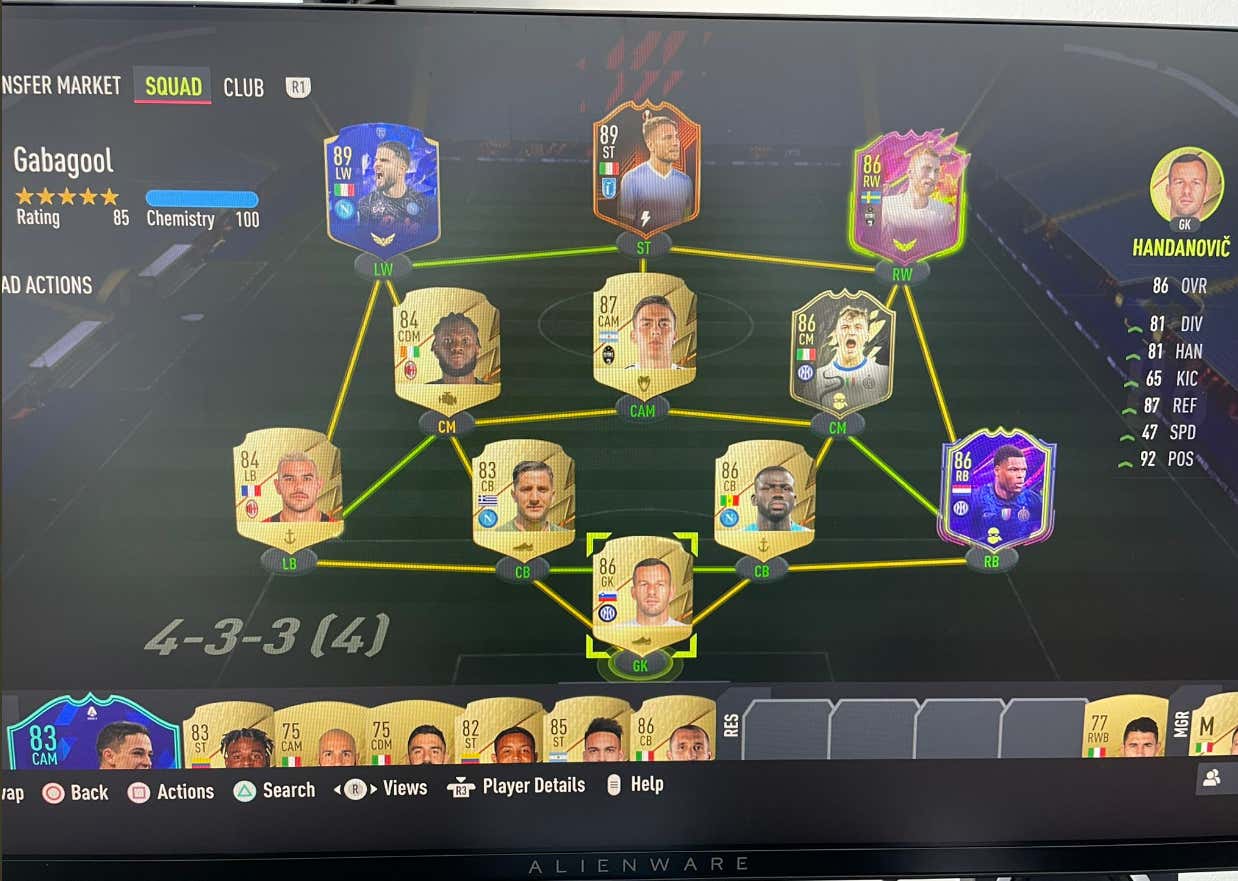 Meet Team Gabagool - this is my Serie A team I've spent all weekend building. At first glance, this team looks INSANE. My 3 attackers are 86, 89 + 89 rated with special card editions. Special cards are extremely important because they're inherently better than your normal Gold Rare (see the difference in colors between my CAM Dybala and LW Insigne).

So this team looks pretty solid at first glance if you haven't played FUT in a while, however I'm here to tell you that this team can BARELY compete. I wish I was able to show you the teams I've been facing. Let me list a few players from the last team I faced:

Even though my team is skilled, we just can't compete with the speed, agility and power of the other teams. WHAT THE FUCK AM I SUPPOSED TO DO!?!?

I can't keep getting bodied by nerds that have been grinding FIFA 22 since the game dropped. It's time to get on their level. Now, the real grind begins.

In the recent FIFAs, they've added a "Weekend League" aka FUT Champions which give players special rewards if you're able to win some of the matches. Think of FUT Champions as the ranked mode of FIFA and Division Rivals is traditional FIFA online (you start at Division 10 and try to get to Division 1). If you win 4 of your 10 qualifying matches, you get the chance to play in 20 weekend games between Friday - Sunday. The more games you win, the better your rewards get. Currently, I'm an astounding 2-5 in 7games played so far. Please send me your best wishes as I finish these next 13 games.

Lastly, send me your favorite Ultimate Team players to add to Team Gabagool.