While there's some dispute about the facts of Brian Flores' allegations against the NFL, there's one story in his lawsuit, that even if it's only partially true, would appear to solve one of the great mysteries of last year.

The story is this one: 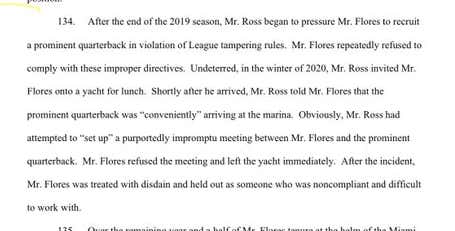 The question is this one:

Among the prime suspects at that time back in June, I included this logical name:

--Ryan Fitzpatrick, Dolphins. This feels a little less likely. But by no means impossible. My first reaction is that Brady would've wanted no part of staying in the AFC East. But after further review, I can't come up with a solid reason why he wouldn't. The guy who's sitting there in a pretend barbershop casually MFing a mystery QB for the crime of sucking would not have hesitated to go play for Brian Flores and try to exact his vengeance on Bill Belichick twice a year. And while we all default to the great moments of Fitzmagic, those get further in our rearview all the time. There have been five full seasons since he won 10 games with the Jets or had a 2:1 TD to INTs ratio. And in March of 2020 (so long before Miami drafted Tua Tagovailoa), you can see Brady looking at Fitz' 12-23 record and wondering what the appeal was.

It's all too perfect. Like an episode of "Sherlock" where the scattered pieces of the mystery suddenly come together thanks to one small piece of evidence or one offhand remark.

Steve Ross sets up some clandestine meeting at a marina, like something out of a film noir. He's arranged to have a free agent quarterback casually show up. Among the list of free agent QBs at the time, the only ones even remotely worthy of this kind of cloak and dagger were Dak Prescott and Tom Brady. As Clem pointed out in his original post, it was common knowledge that Jerry Jones was going to do whatever it took to keep Prescott. That leaves only Brady.

Then went the meeting never happened because Flores, understanding the total against-the-rulesishness of talking to a player before the legal tampering period, noped out of there. You can just picture Brady showing up at the appointed time and place, realizing he'd been stood up, doing the math in his head and realizing the quarterback he's been left hanging for is this guy. Meaning the one on your left

No disrespect to Fitzmagic intended, but you can see how that would make the GOAT go straight to the 12-letter words, even four months after he won his seventh ring. The realization that he showed up at the appointed time for a secret rendezvous only to get left standing there like a jilted lover so that the 37-year-old with the 85.5 passer rating could keep his job, could cause any of us to break out the mother of all profanities. I wished I'd cracked this caper when the story first broke, but I didn't have enough evidence. Thankfully, this came to light. We can mark this cold case closed. Ryan Fitzpatrick: Motherfucker.
tom brady+ 3 Tags