Some quick context - Back in November we interviewed the HunterSeven Foundation - A wonderful, legit, veteran-founded 501c3 that focuses on toxic exposures (burn pits, hazardous chemicals/dusts, fuel fumes, etc...) and the subsequent illnesses they cause in military members & veterans. The goal is using their findings to unite the vet & healthcare communities so that veterans can receive the best possible preventative care, or treatment if they need it. And unfortunately a growing number of post 9/11 veterans do need that treatment as instances of sicknesses like asthma, IBS, etc. & specific types of cancer rise at alarming rates.

Their Instagram often highlights the latest studies, but also shares stories like that of SGM Bill Robles, a beloved leader who passed in 2017 after a heroic battle with stage IV gastric cancer.

Which leads me to "Staff Sgt. Sarah Cavanaugh"... It was on their Instagram page that I first saw her story, and it stopped me in my tracks and ripped my heartstrings out: 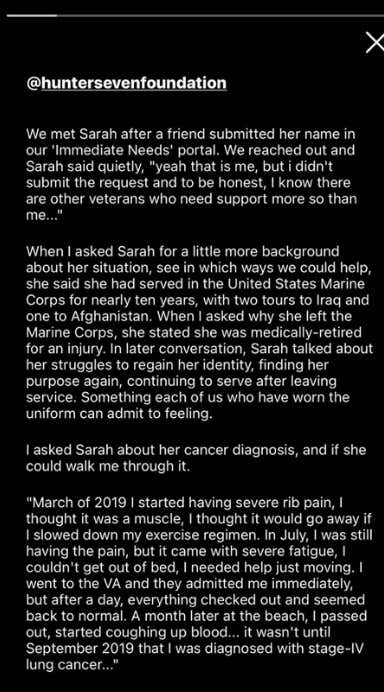 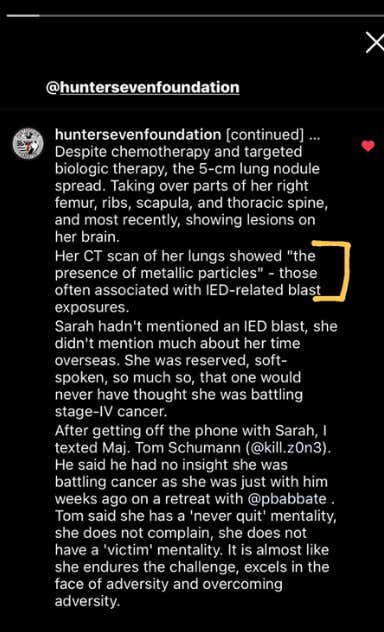 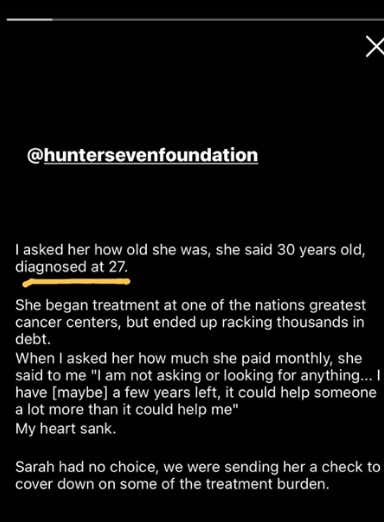 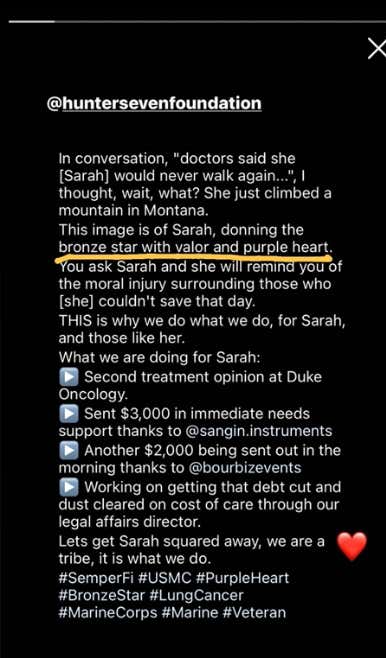 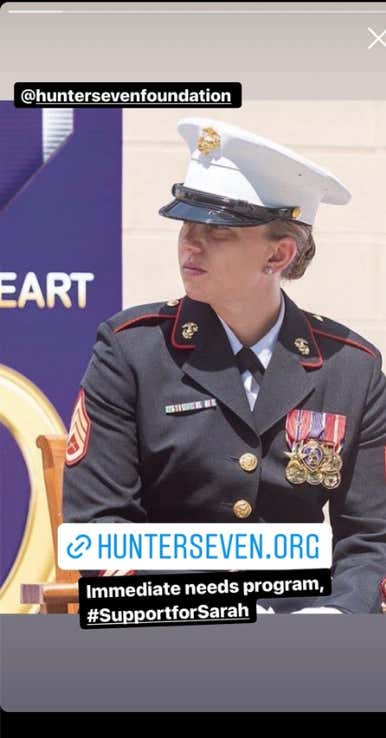 A fellow Marine dying at age 30 with IED particles in her lungs? Fuck. Fuck. Fuck. Terrible. That could be any one of us.

I saw that HunterSeven would be tapping into their "Immediate Needs Program" to help her, along with the assistance of other notable vet orgs, and I wanted to help her in at least a small way if I could, too.

I donated & then posted those screenshots (above) from the HunterSeven Foundation of Sarah's whole heartbreaking story. In the end, I put that donation link & asked anyone following to contribute if they could as well.

I was so wrapped up in the story I didn't think to Google anything more about her background. Through my genuine tears I didn't notice that her Eagle, Globe & Anchors were on backwards in the photo. That her earrings would have been considered out-of-regs with that uniform when I was in. That she had a Bronze Star with a V but no Combat Action Ribbon… Honestly I didn't even look closely at any of that stuff because WHO THE FUCK WOULD LIE ABOUT SOMETHING LIKE THIS?

Lo & behold, several days later I got a personal message from HunterSeven along with an email that literally dropped my jaw… because "STAFF SGT. SARAH CAVANAUGH" WOULD LIE ABOUT SOMETHING LIKE THAT. AND SO MUCH MORE.

And now the story of this woman's many deceits while acting as a veteran are unraveling and they are WILD. And as far as we know she's never actually served a day in her life and she definitely doesn't have cancer. Listen to the latest ZeroBlogThirty from 31:15 on to hear the details that have come out so far, including various OTHER alleged cons before this one. (Teaser - She commanded a VFW, stole art, used fake DD-214s, etc.). Check out the ep as we go over all her sick, sad acts (while fully expecting more to come out soon, sigh):

As for HunterSeven, they sent an email that addressed the issue immediately & transparently with all donors, and have refunded everyone's money. They also shared ways in which they'll take corrective action moving forward so this doesn't happen again.

Anyone can point out the red flags in hindsight, but I can see how they were duped. Various other respected orgs and other groups of veterans including Marines, fell for her act, she was featured & interviewed on several legit news sites. When we see a fellow troop in trouble our knee jerk reaction is to help, not pick someone apart and question things. It feels gross that she took advantage of that. I hope justice is served & karma is swift.