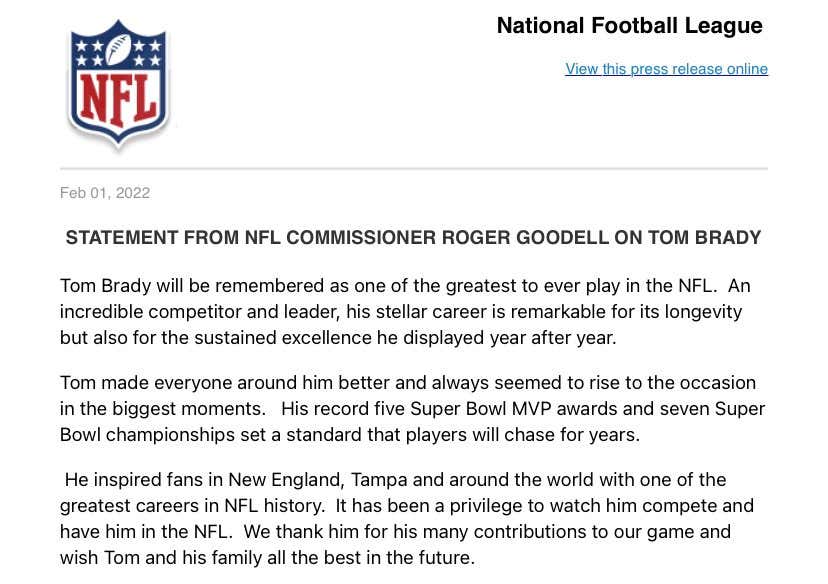 There's an old skit from the early days of SNL, when the show was still built on having a subversive, razor sharp comic edge to it, where Steve Martin played this smarmy, insufferable defense lawyer. His client was accused of sexual assault and he had the victim on the stand and he starts brutally blaming the attack on her. "So you threw open the door in your flimsy negligee …" etc etc, until she's reduced to tears. Then when the court goes on recess, the lawyer walks up and starts asking her out.

"How dare you?!" she says incredulously. "How could you ask me out, after those terrible things you just said to me?!"

That sketch is immediately came to mind when I read this statement from the Commissioner For Life of Football. It often does when someone says or does anything so brutally, shamelessly, ridiculously self-unaware as the Steve Martin lawyer character.

No, Ginger Satan. You do NOT get to play nice now. Fuck you, you devious, unctuous, dishonest, conniving, underhanded, fraudulent, bogus twat. Go piss up a rope and stay out of this. Go back to the slime-ridden hole you slithered out of, snake. You have no right to insert yourself into this great man's well deserved, hard won, victorious moment.

Imagine the balls it takes to talk about Tom Brady's exemplary qualities. Words like "competitor" and "leader," about how clutch he was and what a privilege it was to watch him are like skunk spray being squirted out of a fleshy sack, coming out of his keyboard.

So what happened, Kommissar? You didn't have room to include how he disrespected the integrity of your precious game with his nefarious scheme to have employees doctor the game balls, and then pay them off with signed merchandize? Remember how all his success was due to squishy footballs? How you spent months and millions of dollars hiring a legal team to prove it? How they shot an arrow into the ground and then painted a bullseye around it by paying a fraudulent science-for-hire firm to bury the truth under a mountain of faulty data? The air pressure gauges that showed different results. The simple middle school Science Fair-level physics that was ignored? The fact you took what was, at most, a minor equipment infraction that had been ignored dozens of times over suddenly became a literal federal case. You and your team of legal goons took it one step from the Supreme Court. That's how close we came to the Constitutional body that decided Brown v. Board of Education and Marbury v. Madison almost had to decide Brady v. Ideal Gas Law. All because of you. And don't get me going on that hit piece you fed to Stephen A. Smith about how "Brady DESTROYED his phone!!!" When he upgraded a phone you had absolutely zero right to. You fucking fuck.

Because of this thin-lipped, personality-free, empty-suit, this mechanical, soulless Disney Hall of Presidents automaton, this iconic athlete he's now praising with obsequious reverence, became a punch line. A laughingstock. And just to bring this full circle, the subject of a way less funny SNL sketch. Brady will never be able to strip himself of the Scarlet Letter "C" for "Cheater" you sewed on him. It's a figurative brand that's burned into the reputation he worked so hard to achieve like the "Y" they put on cowboy's chest on the Yellowstone Ranch.

So back off and stay out of this. To borrow a phrase from Gandalf, be silent. Keep your forked tongue behind your teeth. Tom Brady did not pass through fire and death to bandy words with a witless worm. The last person anyone in New England or Brady's family wants to hear from right now this this asswipe.

PS. Note that I'm still pissed off about no mentions of the Patriots or their fans in his retirement announcement. But I'm not letting this particular grudge go.