About a decade ago I was in Boston, working the graveyard shift, with a whole heap of silence and time on my hands, and decided to actually search around that purple podcast app on my iPhone. See what all the fuss was about. At this point I only had two in my rotation: Bill Burr’s ‘The Monday Morning Podcast’ and our very own KFCRadio. That was no longer enough to scratch my audio itch. While on this very short search, one show really stood out - the guy from ‘Newsradio’ was on the top of the charts. Inside his several hundred episodes available for streaming laid thousands of hours of silly little conversations with some of the best comedians in the world mixed in between some MMA fight companion episodes. After sitting through 30 minutes of Alpha Brain ad reads the first episode began and I instantly knew I was home. No one else had the catalog to fill up the 10 hours of “work” I had sitting in random buildings across the city. Little did I know these episodes were the final touchups to the foundation that had been lain for the next big thing in American broadcasting. I don’t know if Rogan knew, either.

I listened because it was truly just a conversation, typically between friends. They’d smoke weed, they’d sip whisky, they’d Google random shit and riff on it off the cuff for three hours and that was it. At no point did it cross my mind that this would eventually be the same place Aaron Rodgers sought out medical advice. It still shouldn’t be, but as the podcasting industry grew, so did ‘The Joe Rogan Experience.’ And it kept growing because the premise never changed. After listening to Rogan’s 10 minute reaction video on Instagram last night, that may have been a mistake. As the guest list changed, the intent should have changed along with it.

This was no longer a show that started on Christmas Eve 12 years ago with a friend and a big bag of weed. This became, at least to a large swath of consumers and content aggregators, one of the largest sources of news in America. No, that was never Rogan’s intent, but at least in this video he now seems to understand that has become his reality. You’re not a Mom & Pop shop when you’re raking in $100 million from a tech conglomerate. The authenticity must remain, otherwise the show dies. The intent has to be handled with a bit more caution. With great power comes great responsibility, things of that nature.

As someone who cares a shit ton about free speech, I will always appreciate the space he has created. I don’t listen as much because I don’t find myself with three free hours at my disposal as often as I did a decade ago. The comedians still show up, as do the musicians, actors, authors, and athletes. Based on the overflowing comment section under this post, that doesn’t appear to be changing any time soon. 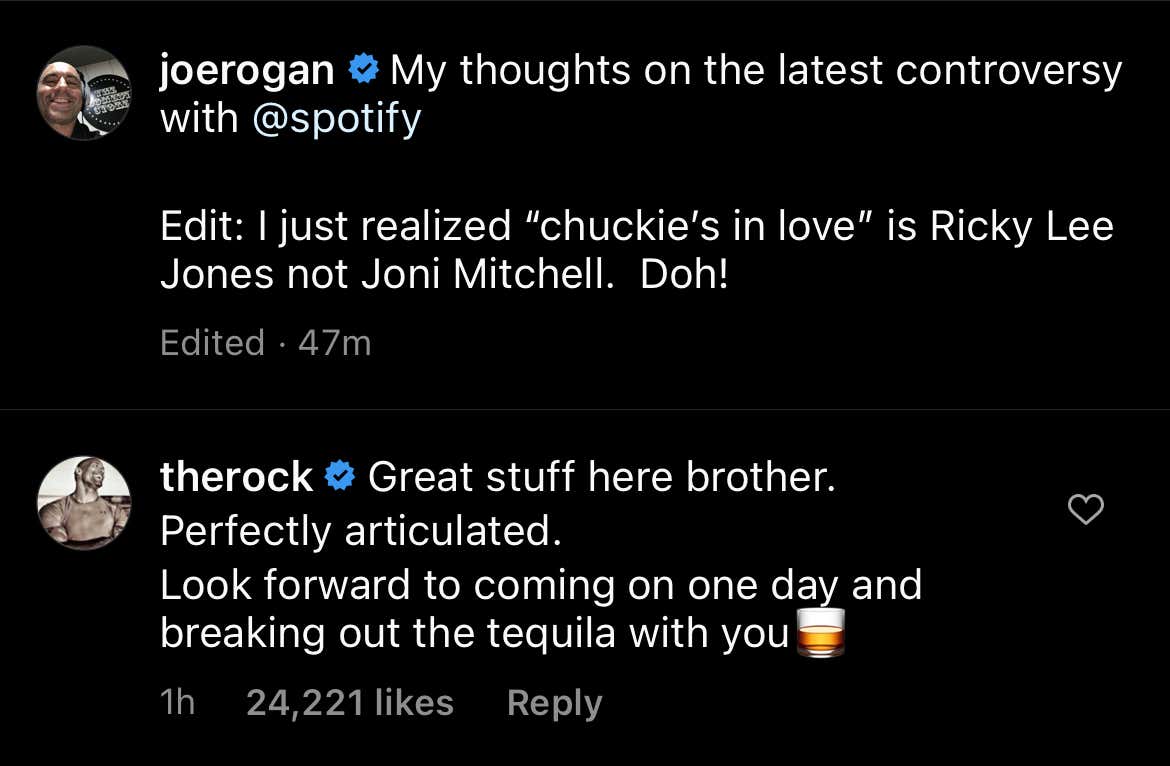 It’s the largest soapbox on the block. Perhaps if we stop treating conversations as news we can maintain our last shreds of sanity. My guess is we’ll be back here by Wednesday running another story on this because we love nothing more than to be a rat on a wheel running nowhere as fast as possible.