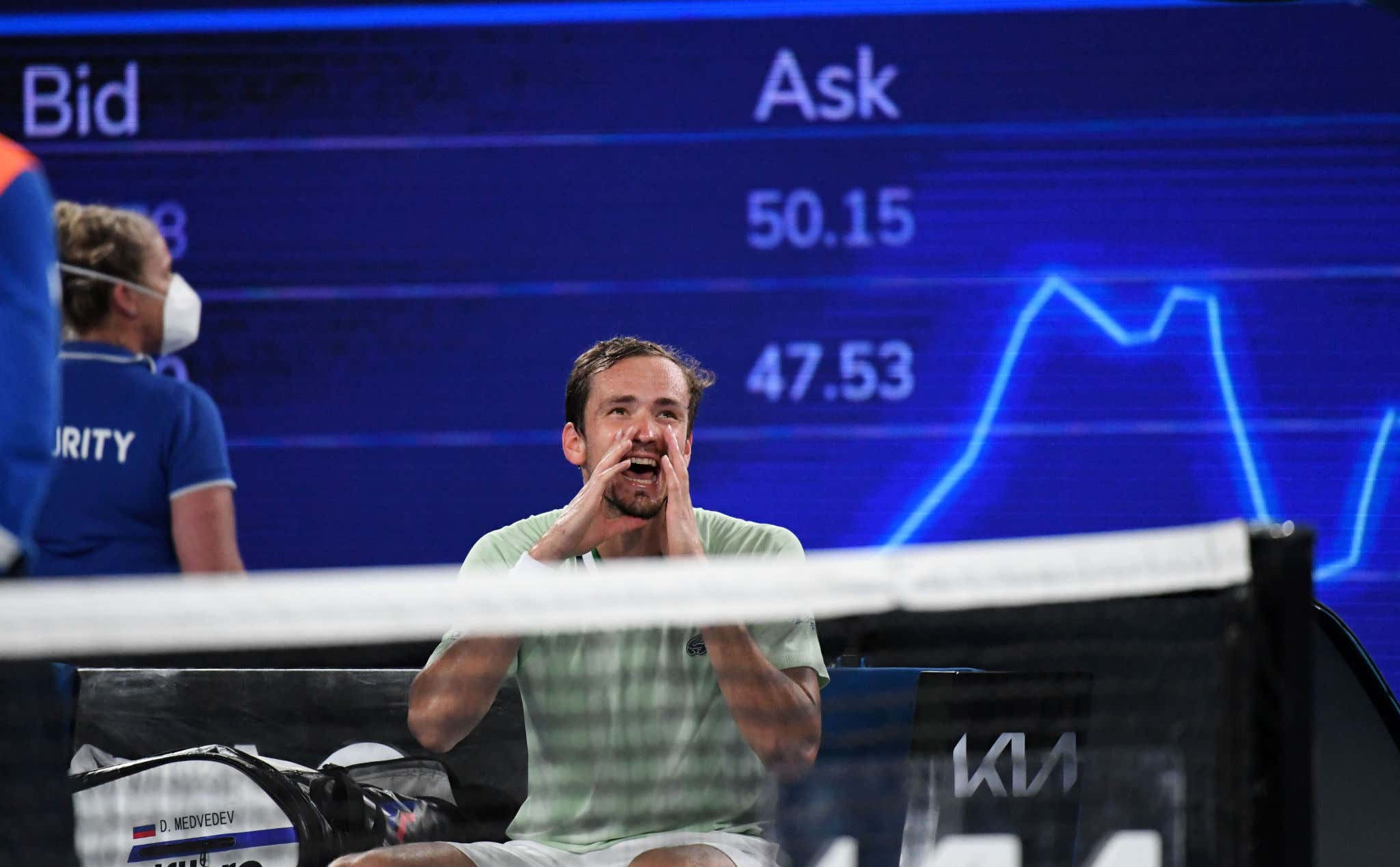 Sports freak outs are the absolute best and we got one last night with world no. 2 Daniil Medvedev losing his mind on an umpire during the men's semifinals of the Aussie Open. Medvedev was up against his rival and world no. 4 Stefanos Tsitsipas with a spot in the finals on the line. These two have a long history hating each other stemming back to when Stef called Daniil a "bullshit Russian" and Daniil calling him a "small kid who can't fight." From there it's always been contentious as they wrestle near the top of the world rankings.

Stefanos' father Apostolos is always in the mix with his son's matches for all the wrong reasons. I cannot think of a person who has been flagged for coaching violations more than this dude.

Quick refresher: In tennis if you're part of the player's team you are not allowed to offer any coaching advice. It's a rule meant to preserve the integrity of the sport, leaving the player out there all by himself to figure things out. It's pretty dumb considering every other sport allows some aspect of coaching advice mid-game. That being said, it's a rule and it's very well known. If you're team is caught giving you coaching you can get hit with a code violation. Those add up and can lead to a loss of first serve, point penalty, or even a game penalty if you get enough. Coaching probably happens in every match realistically, but when you're being blatantly obvious about it you get penalized.

Well, during the match last night Stef's dad was…you guessed it….giving coaching advice in Greek. Least surprising thing in the world considering he does it constantly. I'm pretty sure the actual coach hates when he does this too because it can go against their original plan, but it keeps happening regardless. Medvedev saw it happening after every point and demanded something be done by the umpire.

He proceeded to lose his fucking mind.

LOOK AT ME!!! Medvedev channeling his inner Dennis Reynolds I see. Genuinely a mad man.  Legitimate crazy person. After the end of the set Medvedev wasn't done and dropped the insult of all insults, calling the umpire a "small cat."

Mic drop. Nothing you can do after that but put your head down and go home. Game over, you lost. If I got called a small cat in a verbal joust it wouldn't escape my mind until death arrived. Just no coming back from that whatsoever. You can see the umpire nodding after that in agreement that he's a small cat and has lost. Kinda felt bad honestly, he's got a family to go back to and now everyone is gonna think he's a small cat.

Turns out the small cat insult worked. The umpire radio'd to send an official over there to see if anything fishy was going on. Tsitsipas actually got hit with a coaching violation soon after. The look from Medvedev after was great.

Medvedev went on to win the match in 4 sets.

He apologized to the umpire after and said he regretted acting that way. I mean you can't talk to an official like that, but he also had a point and the umpire wasn't doing anything about it.  The one thing I really like about Medvedev is how he embraces being the villain. I appreciate a guy who truly does not give a fuck if you like him or not. He's also very self aware, honest, and hilarious in all his interviews. Maybe just take the temper down a notch or two.

Daniil will get Rafa Nadal in the finals early Sunday morning for the championship. Would take a herculean effort by Rafa to win grand slam number 21, but he's right there. Medvedev denying everyone their 21st slam would be the ultimate heel move. I'll take the over in that match with the under tonight in the women's final between Barty and Collins.

If you made it this far in the blog have a great weekend and do whatever you can to avoid being called a small cat.