As I'm sure most have seen by now, a bridge collapsed in Pittsburgh's Frick Park this morning. (Ironically, the same day as the President will be arriving in the city to speak about infrastructure).

There are reports of at least 10 injuries with 3 taken to the hospital, but thankfully (and shockingly) no fatalities.

Here's another perspective of the collapse & of how close this bus was to the edge: 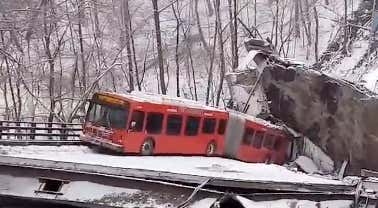 As for its condition prior to collapse, via CNN:

The bridge that collapsed today in Pittsburgh had an “overall condition” rating of “poor," according to the Pennsylvania Department of Transportation website that tracks bridges across the state.

I mean, clearly… Look at this Tweet of the Frick Bridge from 2018 that is now going viral: 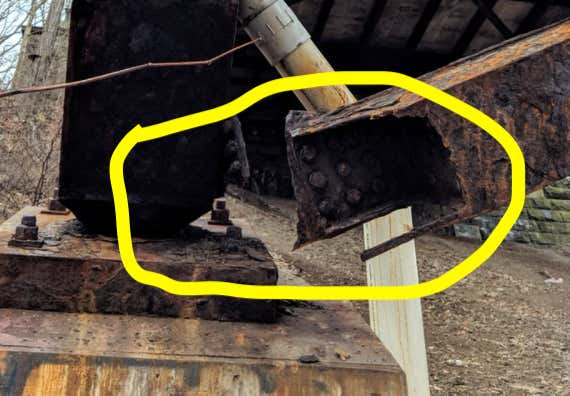 Also, I want to say it's just the angle but it looks like someone jammed a piece of wood in to hold that section up as a quick fix. Then again, knowing what happened today I wouldn't be shocked if that really was the case.

With the Allegheny, Monongahela, and Ohio Rivers flowing through it, Pittsburgh has 446 bridges. That's a ton of maintenance that has obviously not been up-kept, especially in a city that gets crazy temp changes, snow & ice which can add a ton of weight, wear & tear. A 2020 report showed that throughout the rest of the country over 46,000 bridges are “Structurally Deficient” and in "Poor Condition", and 230,000+ are "in need of repairs". Not great!

Makes me wonder how many bridges I've gone over with zero clue they were also in "Poor Condition" with chunks of firewood holding them up. (As of 2019 about 8% of NYC area bridges were listed as such.)