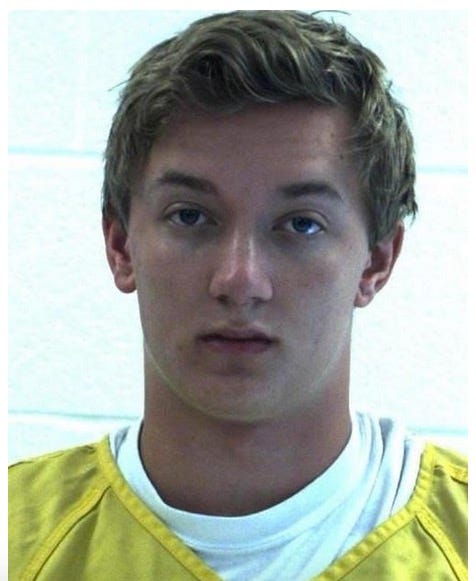 Centre Daily – A Penn State student is in the Centre County Correctional facility, accused of arson and related charges after university police said he tried to set off a fire alarm at a campus residence hall.

Police responded to Simmons Hall about 6:30 p.m. Tuesday after getting a report of a suspected arson from an employee. Officers found burnt paper and a charred pack of Marlboro cigarettes near a stairwell in the building. Video surveillance showed a man later identified as Benjamin Bishop, 18, of Doylestown, try to trigger the alarm first with a lit cigarette, then by burning the pack and papers attached to a door in the building, according to police.

Police said Bishop turned himself in later that day and reportedly told police that he had a fight with his girlfriend, who lives in the building, before the incident. He reported he had been drinking and had not taken his anxiety medication and was trying to trigger the building’s fire alarm and an evacuation to “annoy her back,” according to court documents.

Chicks, man. Fucking chicks. Listen I don’t want to act like Casanova or anything, but I’ve had some girlfriends in my day. I know what it’s like. We all know what it’s like – they drive you absolutely batshit insane. Push you to your breaking point mentally, physically, emotionally. Make you do things you’re embarrassed and ashamed about like fight, cry, listen to corny music, sit outside their house in your car late at night. Maybe even sneak into their dorm and set a pack of Marlboros on fire. Thought you were just gonna annoy her ass a little bit making her trudge outside in her pajamas in the middle of the night for 20 minutes while the fire department checked things out…end up in a jail cell being held on $100K bail.

Bishop is also charged with possessing incendiary materials, risking catastrophe and disorderly conduct. He was arraigned before District Judge Leslie Dutchcot Wednesday morning and he is held on $100,000 bail.

That’s what I’m talking about, you don’t even consider the consequences, you’re just so pissed off and out of your mind that you do the first crazy thing you think of. Now you’re accused of arson. Welcome to the world of dating.