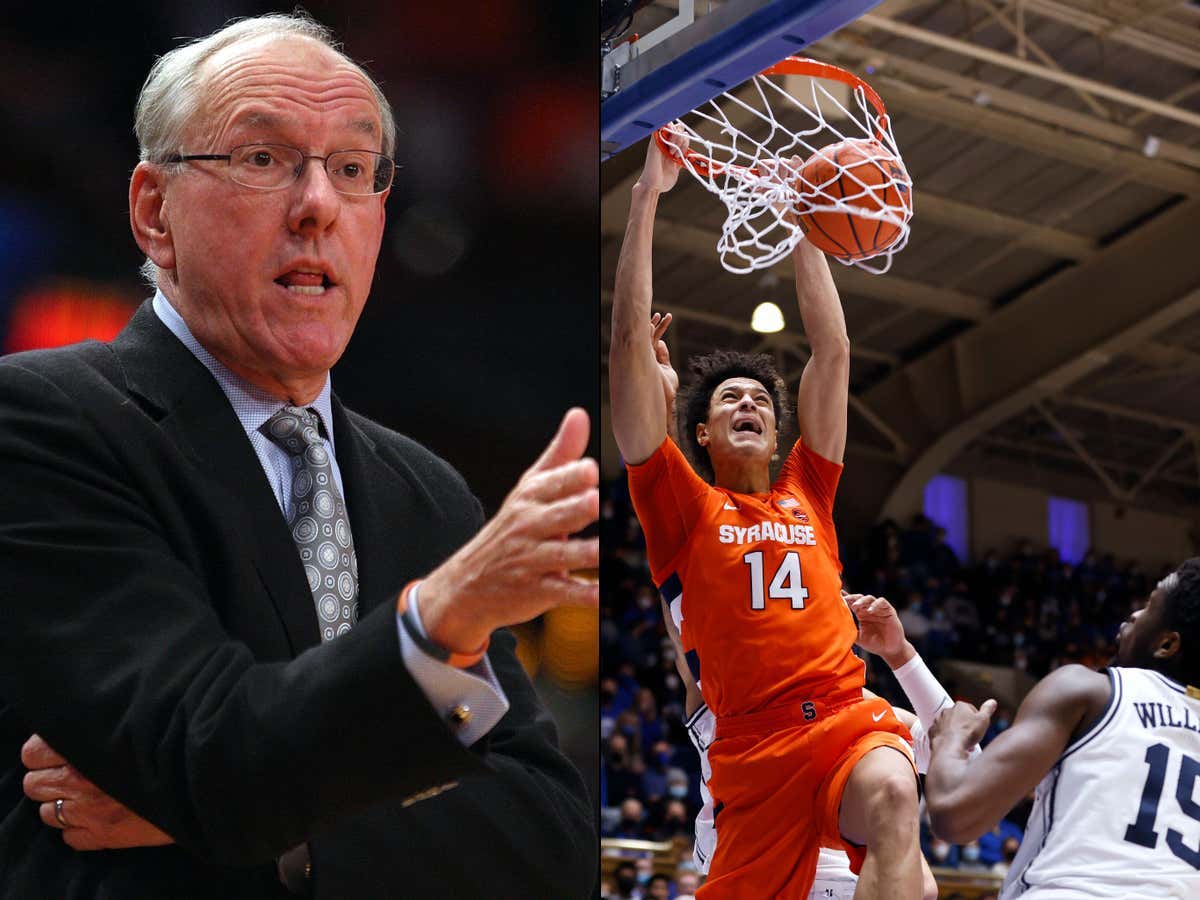 For years now Syracuse Basketball has slowly morphed into a shell of its old self. The root of the problem? The man who built the program from the ground up, Jim Boeheim.

Jim's Orange have been virtually lapped by every single team in the ACC over the last 5 years. With the evolution of the 3 point shot and strides that big men have made in the passing game, the 2-3 zone has been rendered an archaic dinosaur.  On top of all that, no one wants to play for Jim Boeheim anymore and honestly I don't blame them. The program is in shambles and desperately needs a new voice.

Of course I recognize Boeheim is a legend, but he's overstayed his welcome at Syracuse. If you can't admit that you're simply brainwashed. I mean look at this shit. 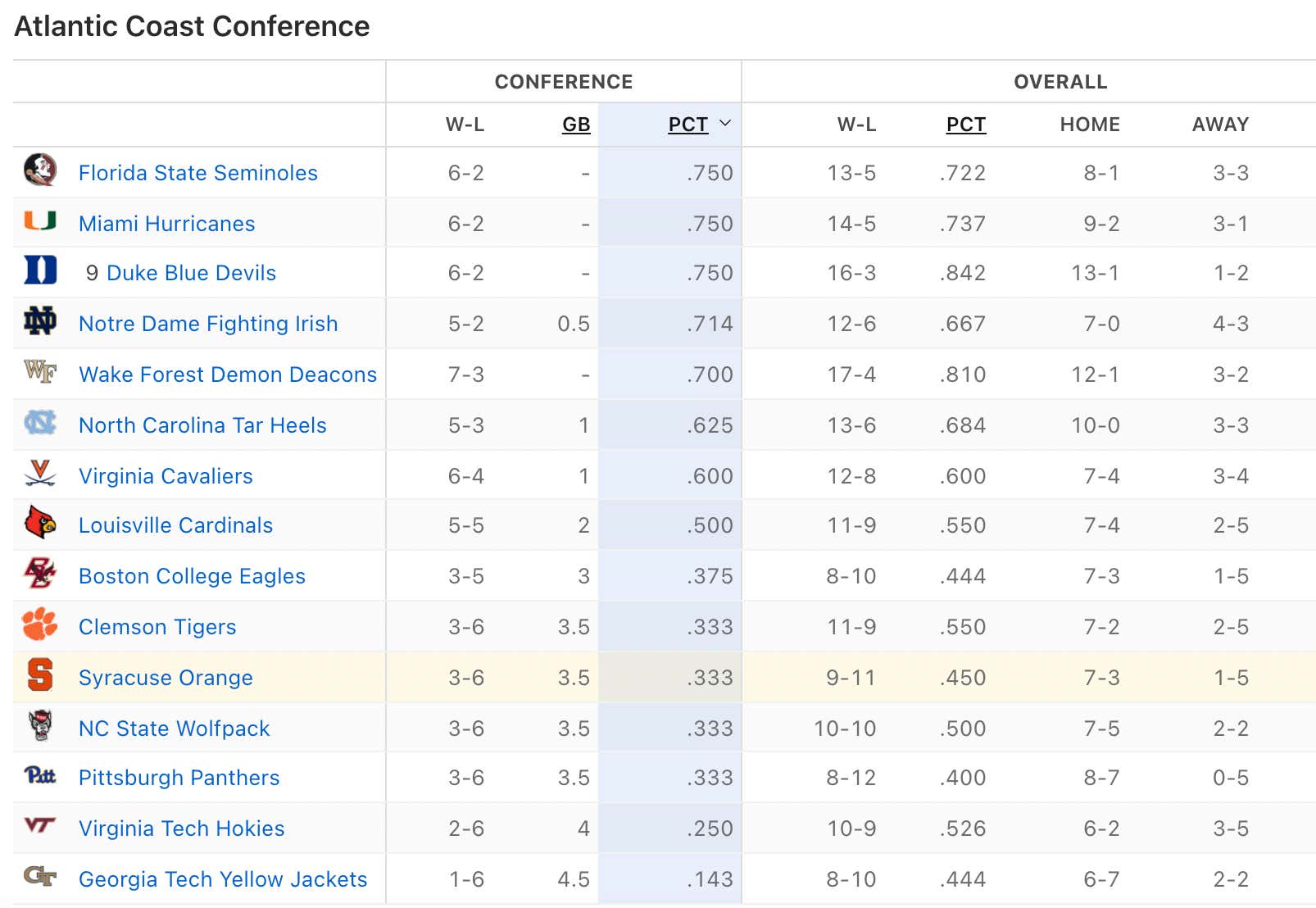 We're talking losses to Colgate, Georgetown, and Pitt mixed in with those 11 losses. Duke just beat them by 20 and if you watched the game it may as well have been 40 with how out of it and over matched they were.

In the latest installment of Boeheim being out of touch, he decided to trash one of the lone bright spots on the team, Jesse Edwards. It had been a slow start at Syracuse for Edwards, barely earning any playing time in his first two seasons and producing next to nothing when he got a chance. Edwards' junior year has saw him evolve into more of his own and thus gain some confidence in his skillset. You can see his jump in numbers here…

Now is he a stud that dominates games? Heavens no, but there's been a noticeable improvement on his end this year no question. Currently Edwards has the highest efficiency rating on the team! Boeheim even went out of his way to say Edwards is better than 90% of the centers in the country just a few days ago.

That all changed last night after the team's loss to Pitt. Boeheim singled out Edwards and threw him directly under the bus before driving it himself.

Keep in mind that clip above was 6 days ago. Less than a week from saying he's better than 90% of the centers in the country Edwards is now an unfixable disaster in the coach's eyes. What are we doing here?

Here's an additional look into the numbers Edwards has produced this year.

Now I'm not out here calling Jesse Edwards the next Joel Embiid, but if you watch the games this year he's far from the problem. I'd instead look at the man at the helm who has chosen to inject this team with nepotism instead of actual good players. His own son shoots worse from the line and the field than Edwards, yet he plays an average of 5 minutes more than him. Jimmy Boeheim playing 34 minutes a night is legitimately asinine. THIRTY FOUR MINUTES. What the fuck are we doing here? Why would anyone with talent want to go to this school and play for Boeheim?

He also chose to continue starting Joe Girard this year rather than promise minutes to an up and coming guard in Kadary Richmond. Let's check in on Kadary real quick…

Nice. Now offensively he's not going to blow you away on a nightly basis, but the effort on defense is night and day between the two. Girard gives up an average of 109.8 points per 100 possession on defense while Kadary is at 93.2. You couldn't create a worse defensive point guard for the zone than Girard if you tried. The eyeball test gets even worse with Girard who refuses to take anything but bad shots. The fact that Jim didn't recognize this painfully obvious problem last year is a joke. Instead he just plays his sons and Girard like there's no issue at all and the team isn't 9-11 on the year. Awesome.

At the end of the day it's pointless hoping for a change. Boeheim is Syracuse and he's not leaving until he wants to. Jimmy just applied for another year of eligibility and there's no way his dad is leaving before his son. At minimum we're looking at another year here. How G-Mac or Adrian Autry haven't taken over by now is crazy. There was a time where it was a shoe in that Hopkins was the heir to the thrown only to realize that time was never coming. It's gotten out of hand.

Can't wait for Benny Williams to transfer and for Jimmy to play a full 40/game next year. So excited! Fire everyone