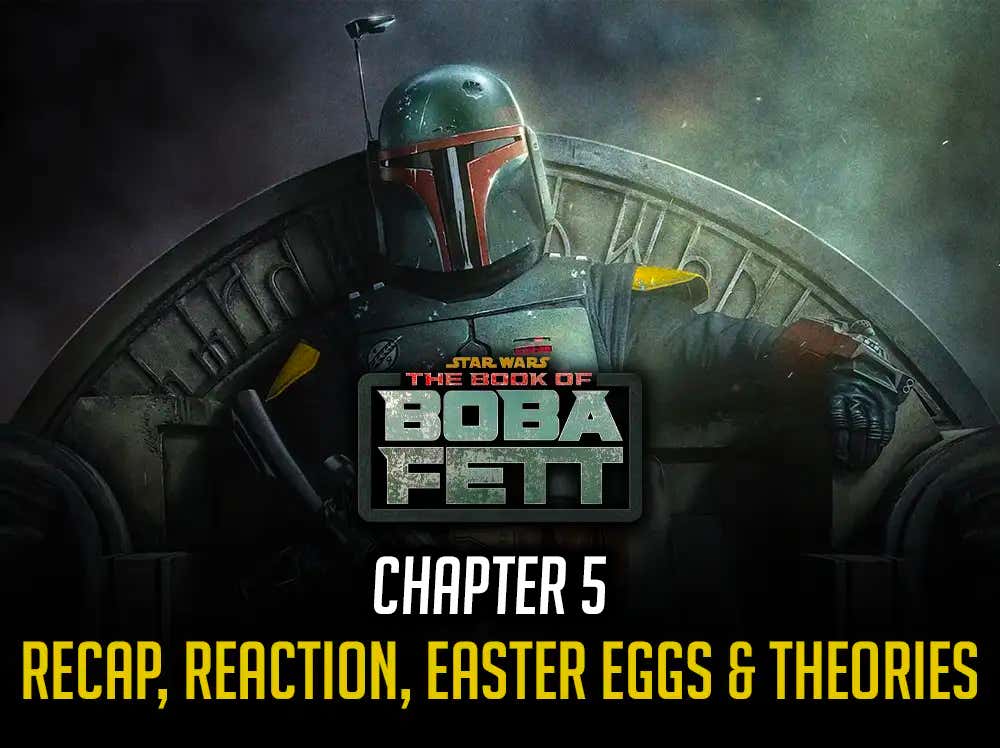 We start off in some sort of butcher shop where a bunch of Klattoonians are busy packing away space meat. Mando, who was teased to appear at the end of the last episode, comes through the doors. He finds his bounty counting stacks in a backroom and tells his goons to back off and let him take their boss. Unsurprisingly, the goons decide to fight. Mando dices them all up using the Darksaber, but also cuts himself with it in the process. He redeems his bounty, which comes complete with information on a secret location on this orbiting Halo ring he is currently on.

The location turns out to be that of the Mandalorian Covert, which is basically the only family he has left. The Armourer tells him the history of the Darksaber, which those of you that watched 'Star Wars: The Clone Wars' already know. It was made by the first Mandalorian Jedi, Tarre Vizla, and whoever wields it is the leader of Mandalore. The Armourer also melts down the Beskar spear Mando got from Ashoka, making him some kind of trinket for Baby Yo. Mando trains on how to fight with the lightsaber and we learn that the reason he cut himself with it is that you need a special kind of training and connection with the blade to wield it. The heavy Mandalorian, Paz Vizsla, challenges Mando to get back his ancestor's lightsaber. Mando barely defeats him, but it's a short lived victory. He is forced to admit that he removed his helmet and the Armorer banishes him. Apparently, the only way to redeem himself is to go to the living waters in the mines beneath Mandalore, which were supposedly all destroyed when the Empire purged Mandalore.

Mando takes a flight back to Tatooine and visits Peli Motto, who he had tasked to find a replacement ship to the Razor Crest. Motto reveals a Naboo Starfighter, which they spend the night fixing up together. He takes it for a test flight across Tatooine and the thing ZIPS. He gets pulled over by a pair of Republic police X-Wings for doing stunts around a commercial space freighter. One of the officers turns out to be the one he ran into previously in The Mandalorian, and starts to question him about some of the recent crimes he may have been involved in. Mando drag races his ass out of there and returns to Motto. There, Fennec Shand shows up and tells him that Boba needs his help. Mando agrees, but says he's gotta go visit baby yo first.

Without a doubt, this was the best episode of the series so far. That also may be because it wasn't really an episode of 'The Book of Boba Fett'. It was just an episode of The Mandalorian. With a lot of other shows with spinoffs, I might find that a bit whack. But just because of the nature of these two shows and the fact that I like Mando more than Boba Fett, I didn't mind them blurring the lines here.

The ep had basically everything there is to love about the Mandalorian. Great fight scenes, good dialogue, a deeper dive into the lore of Mandalore, a really cool building scene, a great flight sequence and an insane volume of Easter Eggs. It also further solidified what I think a big problem of Boba Fett is: Din Djarin exists and he is already exactly what we hoped Boba Fett would be like. The Book of Boba Fett couldn't be just a repeat of what we already experience in Mando, so they've kinda toyed with the perceived character of Boba so that he is less like Mando. That has hurt my enjoyment of Boba as a character, but I don't really care as long as Mando remains Mando.

Also, just from a technical standpoint, it was just really well made. There was a really cool long take on the space station and I think that always helps validate the setting and make everything feel real.

- I have no idea if it was a direct rip, but whatever station Mando is on in the beginning of the episode is basically a Halo ring.

- The armourer gives a little more backstory on the darksaber, but here is a larger rundown. It was made by the first Mandalorian Jedi & later became a symbol of power on Mandalore. In 'Star Wars: The Clone Wars', there is a character who owns it named Pre Viszla. He leads a group of a fanatical Mandaloirans called Deathwatch, and teams up with Darth Maul + crime syndicates(including the Pykes, who we saw earlier this season) to take over Mandalore. He is later killed by Darth Maul, who lures Kenobi to Mandalore in order to kills him as payback for cutting off his legs and taking his life away from him. When Kenobi shows up, Darth Maul uses the darksaber to kill the leader of Mandalore, Dutchess Satine, who happens to be Kenobi's ex-fling right in front of him. Maul is beaten and later fights the Emperor with the darksaber but is beaten again.

In Star Wars: Rebels, Ezra Miller comes into possession of it. He gives it to his Mandalorian comrade, Sabine Wren. She eventually passes it on to Bo-katan Kryze, and they use it to unite the Mandalorian clans to rebel against the empire. Bo-Katan later loses it during the purge. The Darksaber appeared at the end of Mando season 1, and Mando beat Moff Gideon to claim it at the end of Season 2. If you remember, Bo-Katan almost wasted Mando in order to claim it.

- The new tiny droid we see in Mottos shop is a BD unit, and I am choosing to believe that it is BD-1. Those of you that played Star Wars Jedi: Fallen Order will recognize it as the droid that belongs to the young Jedi Cal Kestis.

Fallen Order takes place 23 years before the Book of Boba Fett from what I can tell so it all checks out. BD-1 is an awesome droid, and I'm happy to see him get some shine.

- In Motto's shop, we also see R5 again. R5 famously exploded in the beginning of A New Hope, which lead to Luke buying R2-D2 instead. There was actually a really funny non-canon story called Skippy the Jedi Droid which presents him as a force sensitive droid that purposely blew himself up so that Luke could end up with R2 and save the galaxy.

- The Naboo Starfighter is obviously the same sort of ship that a young Anakin Skywalker uses to fight the droid blockade in The Phanom Mennace. I like how Motto does her little used car salesman pitch and that part of it is that it was handmade without droids. Don't forget that Mando HATES droids.

- The long tube thing that the Jawas recover for the ship looked very familiar. After further review, I am almost certain that it is the same thing that Han uses to try and stop the trash compacter in A New Hope.

- While testing the starfighter, Mando goes through basically the whole podracing track from The Phantom Menace

- The unfamiliar X-Wing pilot was played by Max Lloyd-Jones, who was the body and facial refernece for Luke Skywalker in his episode of Mando.