On Pardon My Take recently I remembered a story I had heard about Rastafarians selling weed out of churches in exchange for "Donations." According to my source there was a Church called "Lion of Judah: House Of Rastafari" in which individuals could sign a card to become members of the church and then receive "Sacrament" in the form of Marijuana as long as they "donated to the church." Due to weed being decriminalized in Madison, and the first amendment's role in freedom of religion, the police didn't really bother dealing with the whole situation.

The backstory is pretty wild. To be honest, the storytelling has been granted to me by amazing DMs. 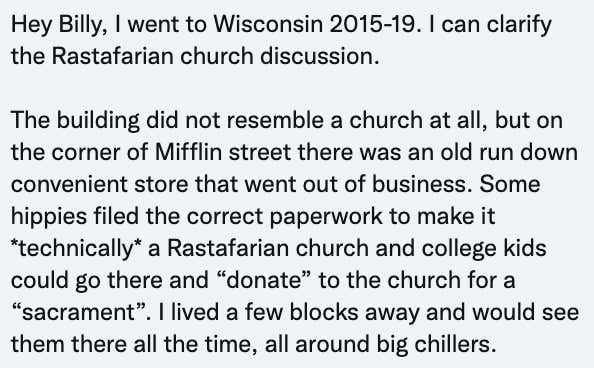 It was all fine and dandy till the cops busted up the whole thing.

The official timeline of the whole situation is pretty nuts. The place was able to reopen after being raided once and subsequently, they were evicted by the landlord.

The whole situation is ridiculous. The fact that two dudes figured out how to be a dispensary under a religious exemption and kept it running for at least a little bit is kind of impressive. It's a shame one guy didn't give his "Donation" and got his knee caps broken, causing the unraveling of the whole religious system.

For these two guys, I am not 100% sure if they are still in prison. But the Facebook page for the church is posting anti-vax pro-weed immunity posts so they may have found a new calling.