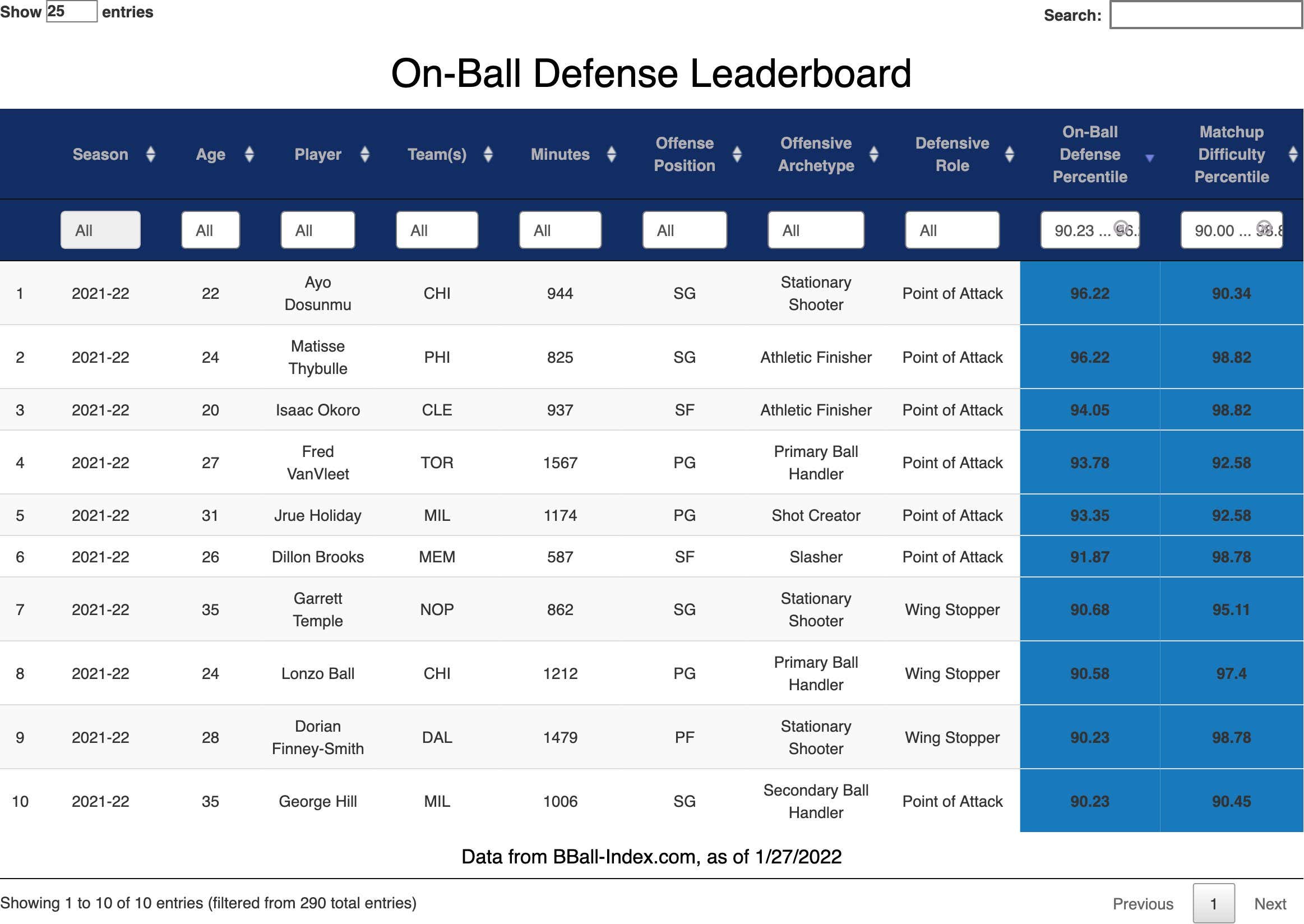 It's been a huge week for Barstool Sports so I can understand if you're not up-to-speed on the latest NBA On-Ball Defense metrics. Fortunately I'm here for you and even more fortunate is that Ayo is at the very top of the most recent list. The 38th overall pick from the University of Illinois isn't just a role player getting COVID minutes. Those preposterous games against the Celtics and the like aren't an aberration and neither is the budding relationship with DeMar DeRozan.

Even so, it still helps to have the Nerds put a black-and-white report on the table that conclusively shows he's doing something at an elite level. And I say the word elite without a trace of irony. I really mean the word elite and I want to thank Artūras Karnišovas for giving me this opportunity. There's nothing like knowing you got a sharp dude running your sports team. That was the great security blanket of Theo Epstein for nearly a decade and the complete opposite of the Chicago Bears. Honest to goodness The Karnivore is putting himself in Tier-1 contention.

Elsewhere, I know I spend a lot of time on Ayo because I'm a biased Illinois guy. But bigger picture the Bulls feel a lot like the 2015 Cubs and the 2009 Blackhawks. Maybe that's overly generic but the general vibe of knowing that you have this long controllable runway is simply outstanding. This sentence will no doubt haunt me at a later date but for now it's a good time.

Some other Bulls notes while we're here:

- DeRozan named all star starter: Huge fuckin news that LaVine broke on the team plane. Although everyone knew it was coming as he dominated the Fan-Player-Media voting finishing 1st-1st-1st for Eastern Conference backcourt.

I could spend the rest of the day copy-pasting bad takes on DeMar DeRozan and we wouldn't put a dent into the available inventory. So just take my word for it. Everyone basically everywhere outside Chicago shit on the guy and it's so beautiful to see him shove it down their fuckin throats. If that's seems aggressive it's because it's an aggressive topic of conversation. I'm offended if you're not offended.

- Jerami Grant trade talk is still lingering in the background and I'm fine with whatever AK decides. If that means moving Patrick Williams then obviously that blows but I'd be stupid to doubt. The pros are that he would instantly put the Bulls offense into another gear. He spreads the floor from the #4 and plays off existing strengths perfectly. There's a dip defensively but you can offset that in crunch time obviously. Big question is whether the offensive change is enough to make it to the Finals and offset the loss of Paw. My instinct is not to make a deal because I hate giving up young talent and there's a lot of unknowns. My brain agrees - let AK do his thing and support whatever move he makes.

- If They Don't Trade Patrick Williams and he's back for playoffs then we get the chance of an Ayo/Caruso/Williams rotation on the perimeter which is hilariously diabolical. That's like the linebacking corp for the 85 Bears. The chaos will be savory. Imagine them hawking down a 2nd unit with 4 minutes to go in the 3rd quarter of a playoff game. And the Bulls are on a 14-0 run over the final few minutes. Steel curtain aint got shit on that triumvirate.

- More Bulls Talk on Red Line Radio so go listen to the show and download it. We're allegedly interviewing one of the Bulls and NBA's heaviest hitters next week. And I mean that literally. Guy used to smash skulls. Subscribe to YouTube so you don't miss out, and in the meantime enjoy this philosophical trip with Chicago Wheaton legend Jim Belushi