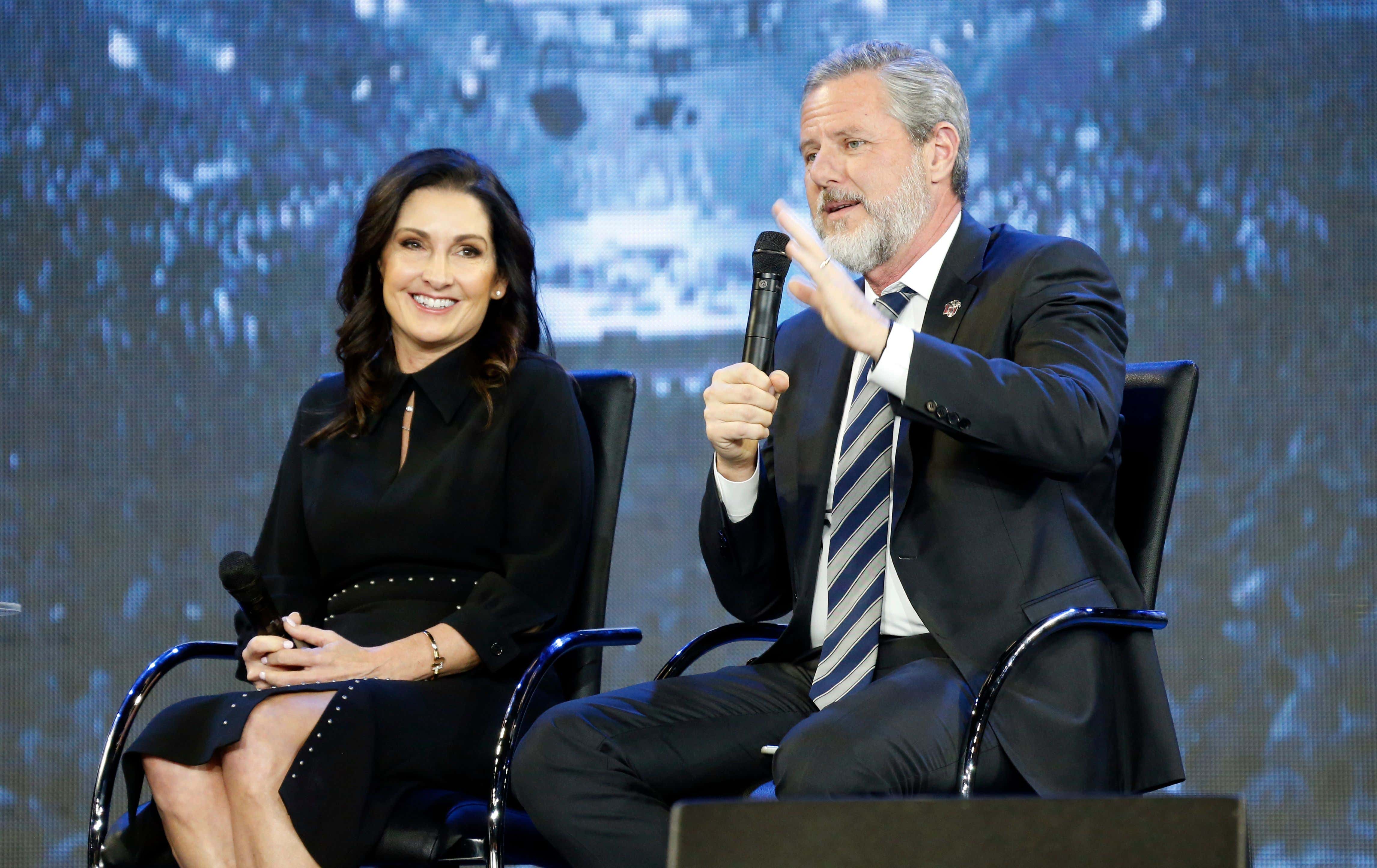 Ah, Becki Falwell. There are precious few memories of 2020 that are worth cherishing. But if there was anything that helped mitigate the worst time to be the writer of silly, satirical humor blogs, it was her epic saga of marriage, extra-marital affairs, and extra-marital affairs with a sidepiece you met when he was a 21 year old pool boy while your husband sits in the corner watching. And when the happy couple in question were running Liberty University? And the scandal of their … well, libertine … lifestyle paid them $10.5 million to go away? Well, let's just say their story made those dark, depressing months just fly by.

But we haven't had an update since the young, backyard aquatic recreation maintenance expert who turned that couple into a throuple, Giancarlo Granda, told his side of the story:

Talking Points Memo - [W]here others saw bible thumpers with an axe to grind against modernity, Granda says he saw a “hot cougar" …

Their status in the political and religious worlds — and its divergence from the lust and debauchery he was immersed in — began to dawn on him in unpleasant ways.

“I was watching some video clips on my phone..Woww!!! These are two people that are very passionate at love-making!” Becki wrote to Granda in a July 2012 text message that surprised the then-21 year old. “But seeing you in person and looking at you in the eyes makes me want to rip your clothes off and get the sh** f* out of me.”

Granda guessed that Jerry had filmed him, and that Becki was in fact watching that video.

'I had a big Canon camera. A couple of times I put it on the dresser and Giancarlo agreed to it,' Becki, 54, told Vanity Fair, alleging her husband did not know she and Granda, 30, had filmed them. …

Granda claimed that Jerry enjoyed watching him have sex with Becki after they first met in Miami in 2012, when Granda was 21.  He even claimed that they formed a 'throuple' - a polyamorous couple who invite a third person to join their relationship.

Jerry, 57, denied that - but did admit to Vanity Fair that he'd once walked in on Becki and Granda in bed, and claimed to have been 'traumatized' by the sight of another man having sex with his spouse.

Becki also claimed that in 2017 Granda, a former Miami pool boy, pressured her into having sex in her 25 year-old daughter's Caroline's bed long, after the relationship had ended.

'But I was scared to death of him too, because he was still holding everything over me, so we had sex. He left and I went into the room and just cried.' …

'I said no. Just because we had sex before does not mean he has a free ticket to my body,' she told the magazine.

He said his version of events would become clear in an upcoming book and Hulu series about his time with the couple.

Just so we're clear, no one should ever be pressured into sex. Even with someone they've been making sex tapes with behind their spouses back. Not to preach, but repeat after me: "No, I don't want to do you on my daughter's bed" means "NO."

Speaking for all fans of this once seemingly happy throuple, it's sad to see their consenting, mutually beneficial relationship fall apart like this. What was once apparently beautiful and loving, allegedly disintegrating into mistrust, coercion, extortion, denials and he said/she said/the other guy said. It makes you wish they could've all worked something out. But three-way relationships are hard. Then again, it's why they're so rewarding. And this one would've been worth saving if only they could.

Then again, I'm beginning to get a sneaking suspicion that we're all being played. I don't want to come across as someone who doesn't have trust in a woman who cucks the husband she runs a Christian university with or doesn't believe the word of a 21-year-old pool boy who bangs cougars in front of their spouses, but something doesn't sit right with me.

All of a sudden these two are talking again. She's admitting to recordings she never mentioned before. Then casually dropping in the brand name of the camera. Like what, her phone isn't good enough, like it is for everyone else? Why the product placement in an otherwise nice story? And now all of a sudden he's talking about book deals and a Hulu series? This is starting to smell (pardon the phrase; I don't mean to impugn anyone involved) fishy to me. Like any day now Becki and Giancarlo are going to announce they're doing a show together. "Cougar & Pool Boy," brought to you by Canon. Maybe it's a reality show based on their fascinating lives. Perhaps a "Ryan & Kelly"-style talk show. Or a procedural drama where they solve cases, have sex on teenagers' beds and he cleans drown mice out of filter baskets. Maybe an old school variety show, with music and comedy skits like Sonny & Cher use to do.

Whatever it is, I'm sensing something is not right about. When all any of us really want is for these three to get back together. And be happy having sex (allegedly) in front of a disgraced former university professor like any normal throuple. Still, it's nice to hear from them again.