I finally got around to making a TikTok about my swim from Brooklyn to Manhattan last August. It did decent numbies, but as usual, someone ripped it and made it go way more viral than I'm apparently capable of.

After a thorough review, I've been able to group everyone's reaction to the video into 6 main categories

Category 1: Pessimists AKA The "He's gonna become a mutant" Crowd

Category 2: Optimists AKA "The East River will improve his immune system or make him a superhero" Crowd 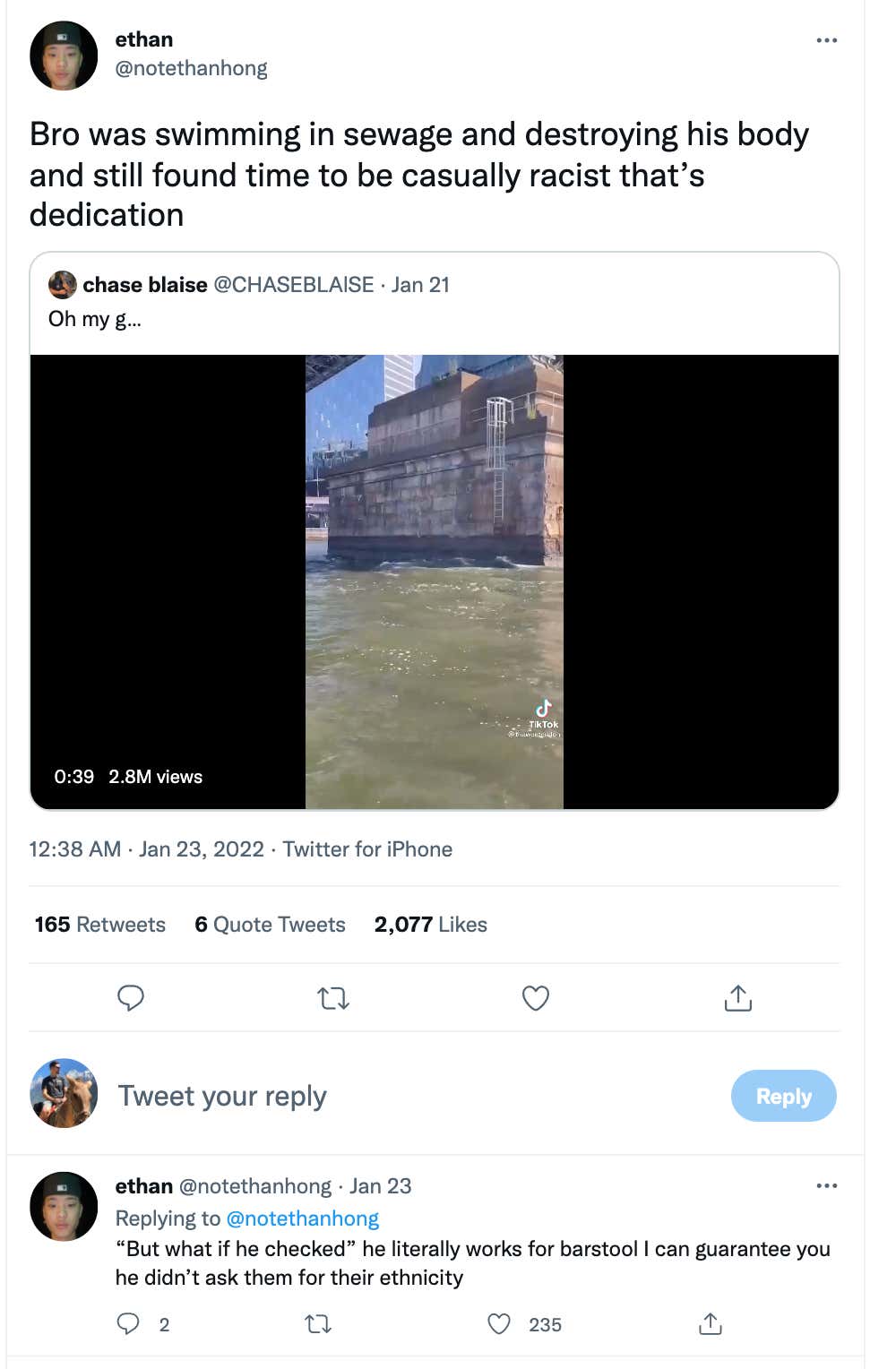 Not only did I hear them speaking mandarin to each other, I spoke to them in Mandarin and shocker they responded to me in Mandarin. Whether you like it or not, the Chinese people were Chinese, case closed.

This was the least common type of reply because it's just patently false. That is textbook breaststroke. How can I be so certain? Uhhh maybe cuz I was ranked in New England in the breast stroke when I was 10 until I quit the swim team and started playing basketball so people wouldn't make fun of me for wearing a speedo (never was ranked in Basketball unfortunately). The only stroke in my arsenal that may be better than the breast is my elementary backstroke aka "The Squid". Could do that shit for days.

However, only ONE person of the millions of people who watched this video had the correct response. And that person was @TheBigBrownGirl

NASTY ASS RESPECT. That's all I wanted. No need to come to my defense and argue that the East River is actually clean these days (it's not)

Just acknowledge the fact I'm a gross guy with immaculate vibes and move on. Thank you BBG!

P.S. How about this Buzzfeed writer thinking the East river is the Hudson. What an idiot!

P.P.S. NYC puts on annual event called the Brooklyn Bridge swim where up to 500 (presumably YT) people swim across the East River and I don't see them getting clowned on twitter!

I was reading an article about this event and when one lady was asked why she does it this was her reply:

(THE VERGE) "It's kind of a polemic in the city, If you want the water to be swimmable, someone should go and swim in it. We're an island city. We're surrounded by water. We should make a point of using that water."

I don't know what polemic means but I love that answer and will be using it as my own when people ask me why I did this. Manhattan has a Margaritaville now for christ's sake so it's about time we start treating it like the Island paradise it is! Swimming in the dirty waterways of NYC is my way of manifesting the clean up of said waterways!

P.P.S. I know where to draw the line. I'm going to India this March and have no intentions of swimming in Ganges (sorry to let you all down).

When a dead body ends up in the East River it's usually because someone was murdered. Dead bodies end up in the Ganges because that's where they're supposed to be.

(National Geographic) The Hindu believe that if a deceased’s ashes are laid in the Ganges at Varanasi, their soul will be transported to heaven and escape the cycle of rebirth.

Not everyone can afford the cost of funeral pyres either. Even the cheapest wood is beyond the reach for much of the poor. Many bodies are discarded into the Ganges partially cremated or not at all. Estimates say 100,000 bodies of various cremation levels are tossed into the Ganges each year

Tune in tomorrow at 7PM EST to watch me swim from Croatia to Bosnia. 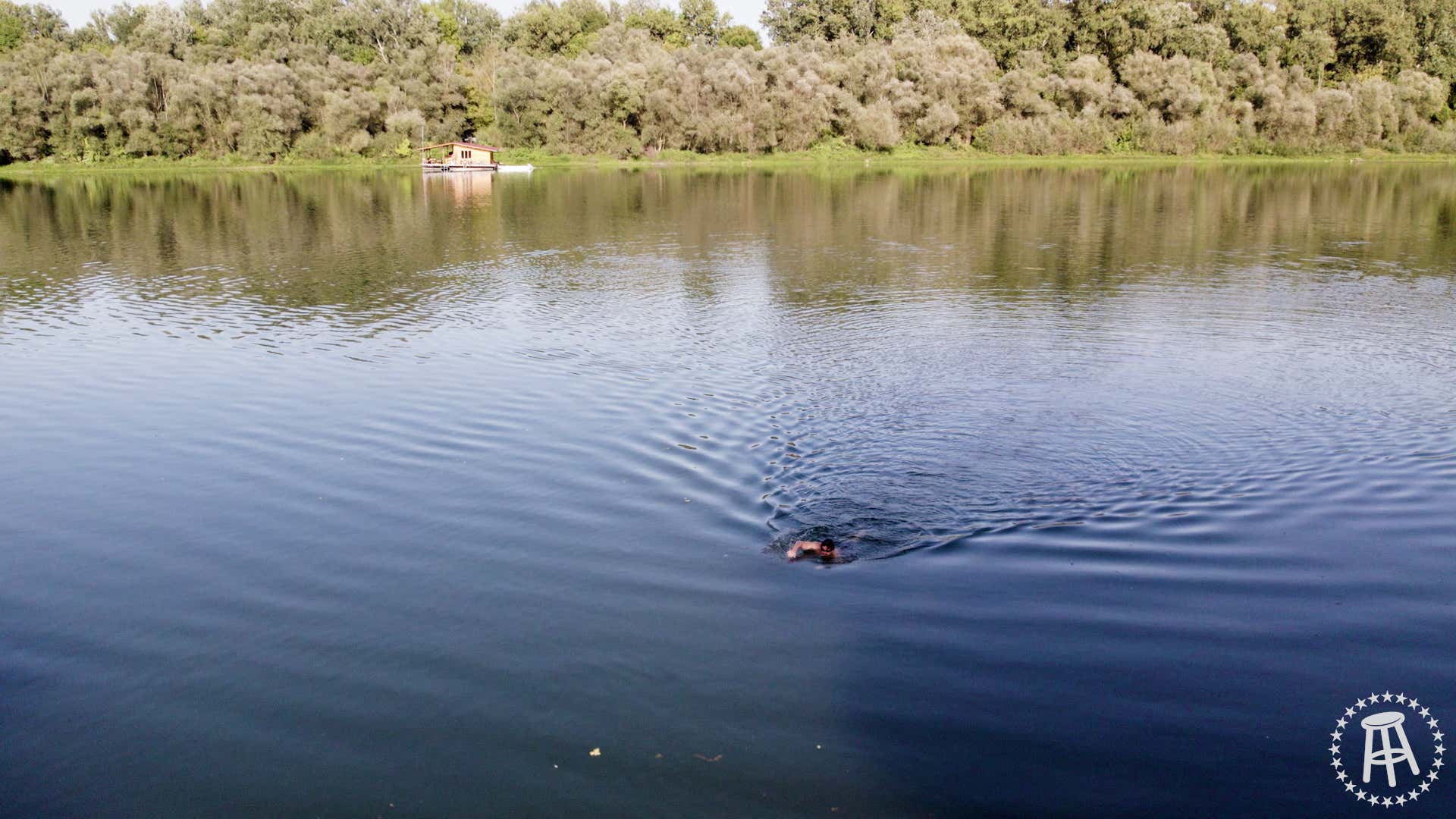