Okay so here's the thing. The Flyers can go to hell. Each and every one of them. From Comcast to management to Gritty to everybody, the Philadelphia Flyers don't deserve to celebrate shit this season.

With all that being said...well it's impossible not to be pumped for Yands tonight. You think about this league. How many superstars have come in and out of the game. How many random call-ups got a chance to lace up for their first ever NHL game, only for it to be their last. It's the hardest league in the world to get to, and it's even harder to stay in the lineup every night once you get there. It's fast, it's violent, it's physically demanding. It's rare to see guys play a full 82-game season these days.

But for Keith Yandle? Well he's now suited up and playe in 964 straight, tying the NHL's all-time iron man streak record which was set by Doug Jarvis. Every single game since March 26, 2009. He even lucked out and got to play 84 games in the 2014-15 season after getting traded from the desert to the Rangers. 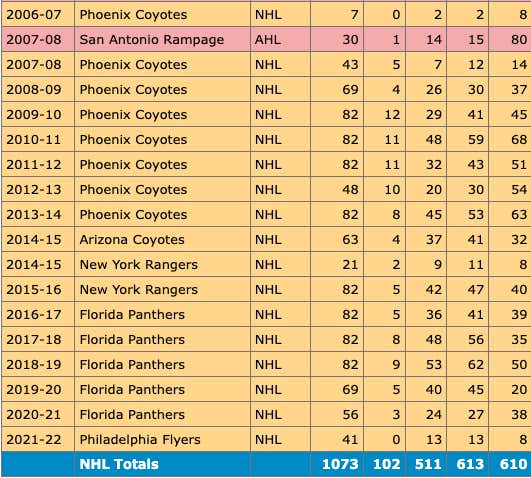 Doug Jarvis' final season in the NHL was 1987-88 with the Hartford Whalers, just to give you an idea of how difficult it's been for anybody to match him.

Sure, you have to have a decent amount of luck to be able to stay in the lineup every night for that long. No long term injuries, no suspensions, no dickhead coaches like Mike Babcock looking to hit you with a health bomb deep in your streak just for the sake of ruining it. But you also have to be tough as nails, and you have to love the shit out of the game and out of your teammates. You have to be an all-time Team Guy. The type of guy who makes the locker room go, and makes everybody in there want you out there every night. So credit to Keith Yandle for that. I know this season has been a disaster, and Keith Yandle has been closer to the problem in Philly than the solution. But it's still an unreal accomplishment regardless of where this team is at in the standings, and here's to hoping that rat bastard Phil Kessel lets him hold the record for a while even though he's creeping around there at 940 consecutive games played right now.