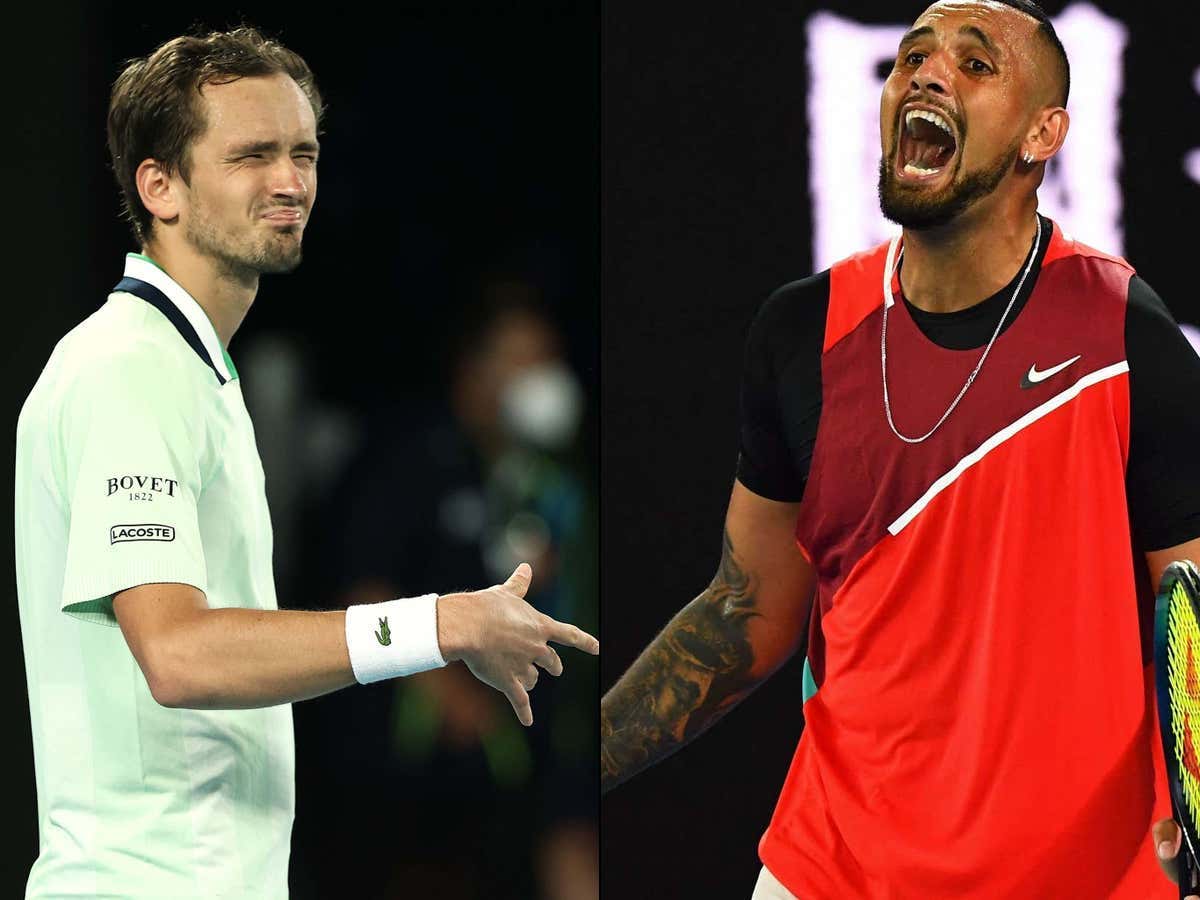 Is Nick Kyrgios ever going to take tennis seriously and give it a real go to crack the top 10 rankings? Heavens no. Is he ever going to train and practice the way a player with his talents should? Absolutely not. Is he going to go at it with the umpire over something as stupid as towel placement when things aren't necessarily going his way? Sure will. That being said if Nick finds himself in the Aussie Open lined up against a top tier player it's must watch television every single time. Last night the Aussie went toe to toe with the World no. 2 Daniil Medvedev and played right with him for majority of the way. There are very few humans on this planet who can do that and he's one of them no matter what kind of match prep or time off tour he's coming in with. The man is a marvel with what he can do with a tennis racket.

It was well understood that if Nick wanted a real chance to compete in this one he was going to have to win the first set. Despite falling down an early break, Nick fought back to shockingly level the opening set and force a tiebreak. It didn't go his way and Medvedev played flawlessly there, but man was that set run. The second set was tight as well, with Medvedev finding a way to claim it for himself. The 3rd set many thought Medvedev would run away with considering Nick was down and out. Nope, instead Kyrgios attacked in incredible, scintillating fashion to break the tournament's top seed and win the set. It was fucking incredible. I admittedly was close to dozing off as the clock struck around 5am until Nick flipped the switch. I would have been furious at myself if I did because the theatrics and atmosphere were off the charts when he grabbed the momentum.

Look at these three points he pulled out of his ass to break the Russian.

I mean listen to that arena. Listen to that crowd. In terms of tennis there's nothing like it. Doesn't matter what time the match starts, if Kyrgios is playing in Australia it's automatic box office entertainment. Set your alarms and grab some popcorn because it's about to be a fucking show.

Nick actually had a chance to break to start the 4th set, but couldn't get his feed under him on a very make-able ball at 30-40. From that point on Medvedev closed the gap and won the match. At the end of the day Medvedev is the better player. He puts in the time and effort to be great, while Nick relies on his talent. That's just who he is and you're not going to change it. That doesn't mean he can't compete at the highest level, but maintaining that performance becomes much more difficult.

McEnroe said after the match that Nick is the most talented tennis player in the last ten years and he's right. I mean think about this for a second. Coming into the tournament he hadn't played a single match since September. He lost ample amounts of practice time after getting covid a week before play started here. Nick found himself bedridden for days, having difficulty breathing while everyone else was training and playing in warm up tournaments. All of that in play he was able to stay right with the game's best player at the moment for three full sets. He served in the 130s the entire way, hitting every spot he wanted. He played aggressive in his return game, stepping way inside the baseline on Med's second serve and it troubled the Russian. It looked like a variation of Federer's SABR where he starts running to the net while the ball toss is in the air. He played aggressive, spirited, and smart for three full sets and it was awesome to watch. Fourth set he was out of gas, but we can't be greedy now can we?

I'll always get shit for being the tennis guy, but I don't know how you watch that match live or the highlights after and think that was boring. Watch someone like Bautista-Agut play and you are well in your right to think that way. Watch John Isner play another tree that serves hard and you'll turn it off in seconds. You watch Nick play in the Aussie and you cannot physically change the channel because it's too entertaining. He's the disruption the sport needs to survive. There are rumors this is his final year on the tour at the age of 26 and I hope to God those are bullshit because watching him play is a fucking treat. Would it be hilarious if he took it seriously for just one full year? Yes because he'd win a slam and vault into the top 10 with his talent while simultaneously making all the olds heads' explode. That's not going to happen. He's going to play and live his life how he wants and truly not give one single fuck what you have to say about it.

Full credit to Medvedev on this one though. He felt Nick zoom to another level and took himself to one as well. The Russian reached a personal best with aces in a match and he needed every single one of them in those first three sets to grab the advantage. His return game was insane as usual, getting to serves he had no business reaching. Once the rally starts he has the edge of almost every human alive it's nuts. I truly do not see a way he loses over the next week and a half. I recognize it's chalk but +130 on the Barstool Sportsbook seems like the bet to me if you're into futures.

P.s. Lots of people are talking about Medvedev's interview after the match. The man is the ultimate troll who loves to play with the fans and have some fun.

He even wrote the "SIUUUUU" chant on the camera as he walked away. Fans gotta stop that shit, it's so annoying and I'm not sure one player likes it. Fucking Ronaldo.