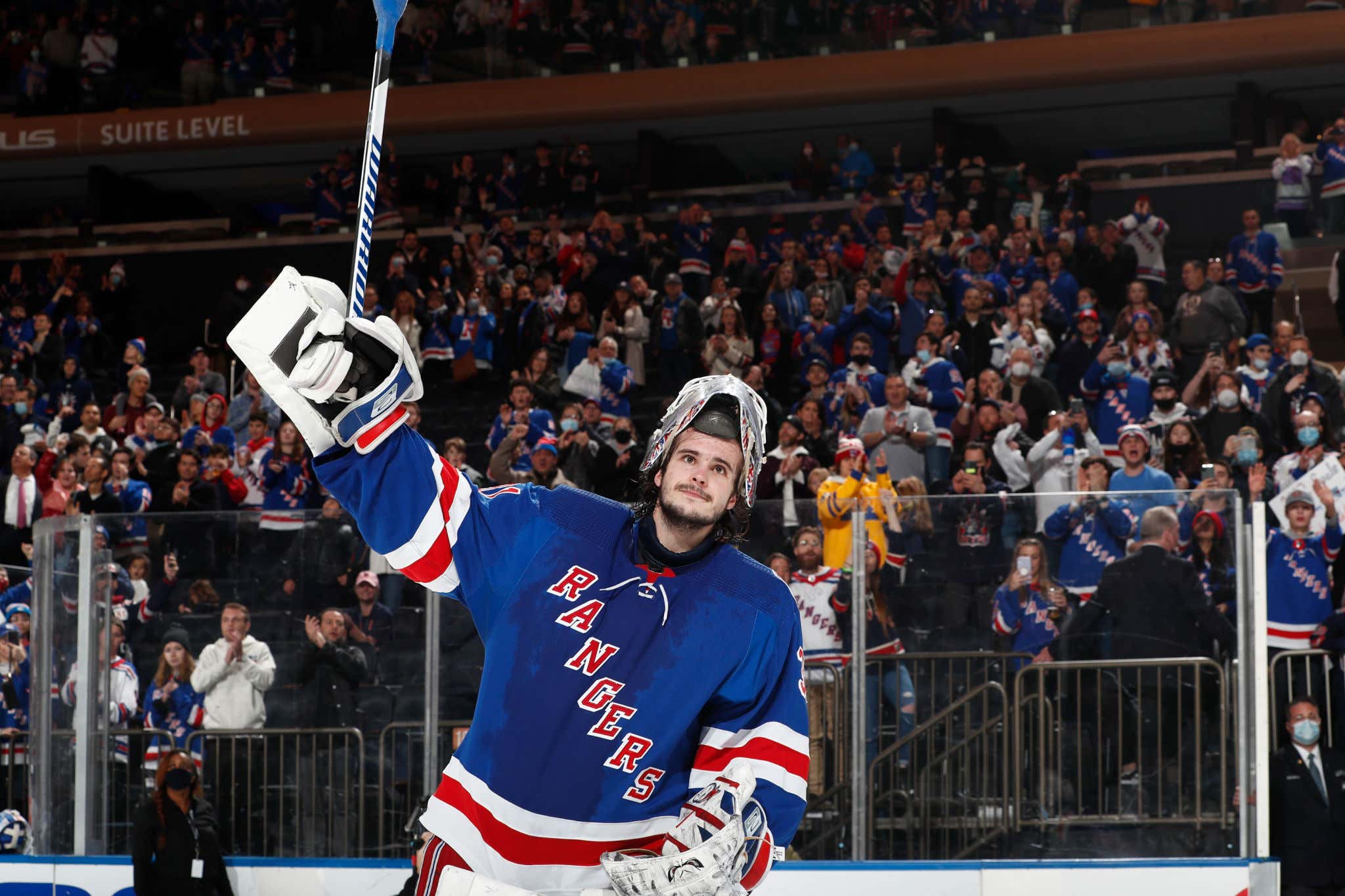 It didn't start off pretty last night against the high-flying Maple Leafs. 3 goals on 11 first period shots put the home team in a hole and surely had the haters saying "see, they can't hang with quality opponents!!" Not so fast. The Rangers took over the rest of the way, scoring five straight while their all-world goalie shut the door on Toronto's final 27 shots to give his squad a chance. When the clock ran out the Blueshirts skated off with their second win in three tilts against the Leafs, extended their record to 12-0-1 when tied after two periods & once again proved a level of resilience no one saw coming so quickly.

As for Igor Shesterkin, his season stat line reads 18-4-2 2.03/.938 in 23 starts. The heir to Lundqvist's throne has been all that and then some - on a team with names like Fox and Panarin there's still no question Shesterkin has been the team's most valuable player so far and, at minimum, a slam-dunk Vezina finalist entering the halfway point of the year. While there's still a long way to go and no netminder has done it since Carey Price in '14-15, maybe we should start kicking around Igor's name for the Hart Trophy as well.

When Price dominated the voting over Ovi & Tavares he finished 44-16-6 with 1.96/.933 peripherals in 66 starts. Incredible season carrying the Habs to the second seed in the East, just three points behind the Presidents Trophy-winning Rangers, without much offensive help. A big factor to his MVP was Price manning the crease for 80% of the schedule. It's unlikely Shesterkin will rack up 37 starts in his team's final 42 games for him to even get to 60 as he's already punted around 8 starts due to injury & Covid. Still, take away remaining back-to-backs and there's 36 possible. Assuming he stays healthy he'll most likely get to 55. Will starting 67% be enough to sway voters to throw support behind a tendy?

If Shesterkin maintains this level of play throughout their remaining schedule, it may very well be. While the peripherals may be similar, a little digging proves Shesty has been MUCH more valuable than Price's Hart campaign so far. For starters, his team has collected 78% possible points when he's between the pipes compared to 71% for Price. More importantly though, Price's job was a lot easier as shown by per-60 stats from Natural Stat Trick:

There's no other netminder this year even close to Shesterkin's .93 GSAA/60 number - the next-best is Frederik Andersen's .58. Bobrovsky & Saros' HDSV% of .857 is a distant second to Shesterkin's .871 & Bob's .37 HDGSAA/60 doesn't sniff Shesty's .5. The Rangers backstop is separating himself from the goalie pack and is the biggest reason why they've unexpectedly crashed the party among the league's best with powerhouses like Tampa Bay, Carolina, Florida, Colorado, etc. The second half of their schedule is backloaded with a shit ton of what will be crucial battles against the cream of the Metro crop. It's certainly no given that Igor can keep up this absurdly high standard. But if he does…then why not Shesterkin for the Hart Trophy?