Source - NBA superstar Devin Booker might not be the most athletic person in his relationship after all ...

Here's video of Kendall Jenner absolutely carving up a mountain on a snowboarding trip in Aspen on Wednesday -- reaching high speeds and hitting jumps with ease!

The supermodel (and Booker's girlfriend) posted the footage of her epic run to her social media page ... and it's clear, she's got skills on the board.

Kendall flew down the mountain and stuck the landing on two jumps ... and then nearly landed a third one flawlessly before she skidded to a stop on her backside.

Kendall Jenner? A shredder? Color me shocked. And before you say that video wasn't impressive, I challenge every person reading this to do what she just did. Get on the slopes, snowboard, and see if you can successfully "catch air." You can't. No one can because not only is it impossible, it's terrifying. Then again, Kendall is only twenty-six years old so the fear of injury probably isn't in her consciousness. Regardless, being able to keep it together while in the air takes much more skill than you think. Mostly because the second you leave the ground your natural instinct is to go spread eagle. Even if it's only for a split second… 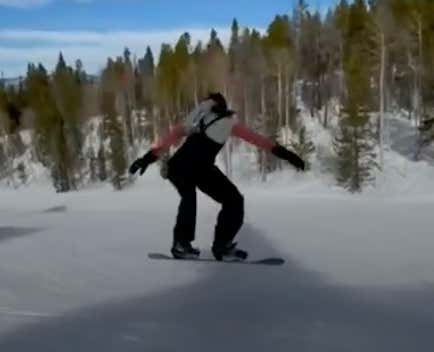 Having said that, I'm not surprised Kendall can shred. Her father was one of the greatest athletes to ever walk the planet. She also quite literally gets paid to work out. Oh well. I'd love to get out west to ski at some point so if anyone has any suggestions on where to go leave them in the comments. Thanks. Now here's a highlight reel of Caitlyn crushing the Olympics for those of you who have never seen. Enjoy…