Holy crap, Colin Cowherd! Slow down! Take a break with these hot takes! First it was Bill Belichick being on the verge of "moving on from Mac Jones," now this. Even a volcano burns itself out eventually and goes dormant. But this man has a limitless capacity for spewing magma that never cools. It just covers the world, and turns everything into a floor of hot lava you cannot step on.

The thing of it is, January of 2022 is not the first time we've heard the argument that Belichick is a relic from a bye gone era, and the game of tackle football has passed him by. As a matter of fact, we probably heard it when he was first hired by Mr. Kraft in 2000. Why wouldn't you know it, I felt around the floor of the car and found one of the receipts: 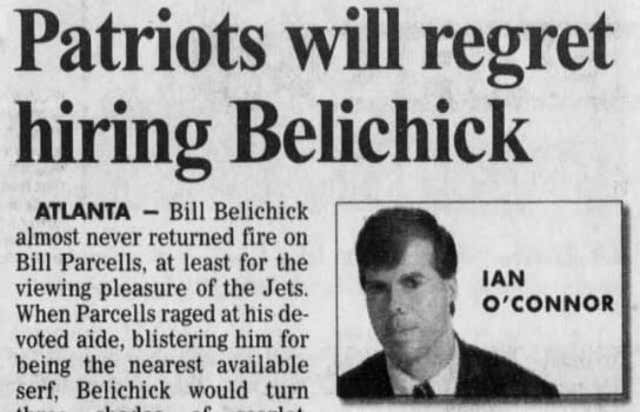 I'm sure there were some saying it in 2002 when the Patriots went 9-7 and missed the playoffs. For sure it came up after he released Lawyer Milloy and Tom Jackson said, "They hate their coach" and the Boston Herald called him "duplicitous pond scum." And while he got a break from that talk while going 34-4 and winning the next two Super Bowls, that "game has passed him by" stuff was a common theme during the 10 years between championships.

All through the period from 2004 through 2014, someone else was always coming along that had reinvented the art of coaching in the modern age. Tony Dungy. Bill Cowher. Sean Payton. Any given Harbaugh brother. Pete Carroll. They were all playing with XBoxes and Play Stations, and Belichick was a kid with a slingshot in the back pocket of his overalls, pushing a hoop down the road with a stick. He had no grasp of the new rules or  the innovations in play design. Nor did he have any understanding this generation of players or how to relate to them. So, ironically, it's the guys like Cowherd who are operating off an old template, not Belichick.

Still, you have to give credit where it's due to this latest wrinkle. This is new and fresh indeed. To take the last 10 years as proof that Andy Reid has supplanted Belichick as the best coach of all time is just so breathtaking, you have to just step back in open-mouthed awe at the sheer audacity it takes to utter it out loud.

I mean, the claim so bold I can't even argue against it. All I can do is respect it. Andy Reid has an amazingly talented, generational quarterback and has surrounded him with elite talent. And that negates Belichick's five conference titles and three championships over the last 10 years. As well as the two times he's beaten Reid in the playoffs. The scissors of Reid's offensive system cutting the paper of Belichick's collection of trophies and banners.

Diabolically ingenious thinking. All I can do is lay down my sword and shield and bend the knee to anyone capable of coming up with this. But before I go, I'll just address the idea that in today's NFL, it's all about the quarterback and nothing else. And leave this here. Mac Jones first season compared to Josh Allen's second season, via Pro Football Reference.

If he's right, and QB is the only thing that matters, don't get comfortable with your claims the game has passed the GOAT by.