On New Years Eve when I was flown out to NYC and busy going 1-8 on bets and being forced into gambling retirement, apparently I got this text from my music podcast group text: 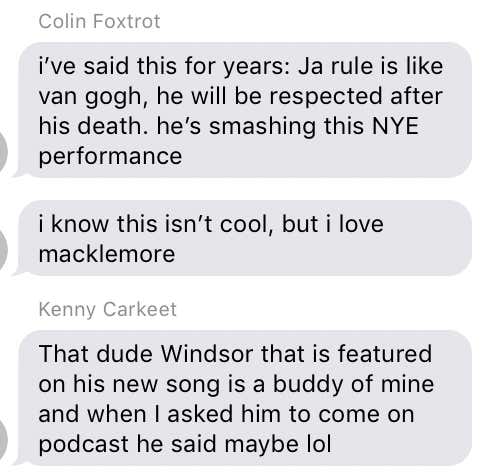 Truthfully I just pissed $500 away so I didn't even notice the text. But then as the days went on all of a sudden we're locked in to record an interview with Windser, who was just featured on Macklemore's last single "Next Year". In the interview, he broke down his insane last few months of grooving and grinding trying to make a name for himself in the middle of a global pandemic, to playing on stage with one of the recording artists in the entire world 6 months later. Here's a little clip of the show:

Cool shit. Never heard of him, but awesome. Then we got to the interview and Windser is the sweetest dude ever. I mean that in the literal sense of the word, just a shy, sweet kid who has no idea what's about to happen to him and his career. He's just a 24 year old kid from SoCal letting the world come to him and he's got PIPES.

Take a look at him. His previous band was "Mainland" that saw a good amount of commercial success:

It's really an awesome story. It's always great to see people that bust their ass and exude "good guy" do well and catch their break. Check out the interview, it's a really cool long form success story. Check it out on "On The Guest List…"