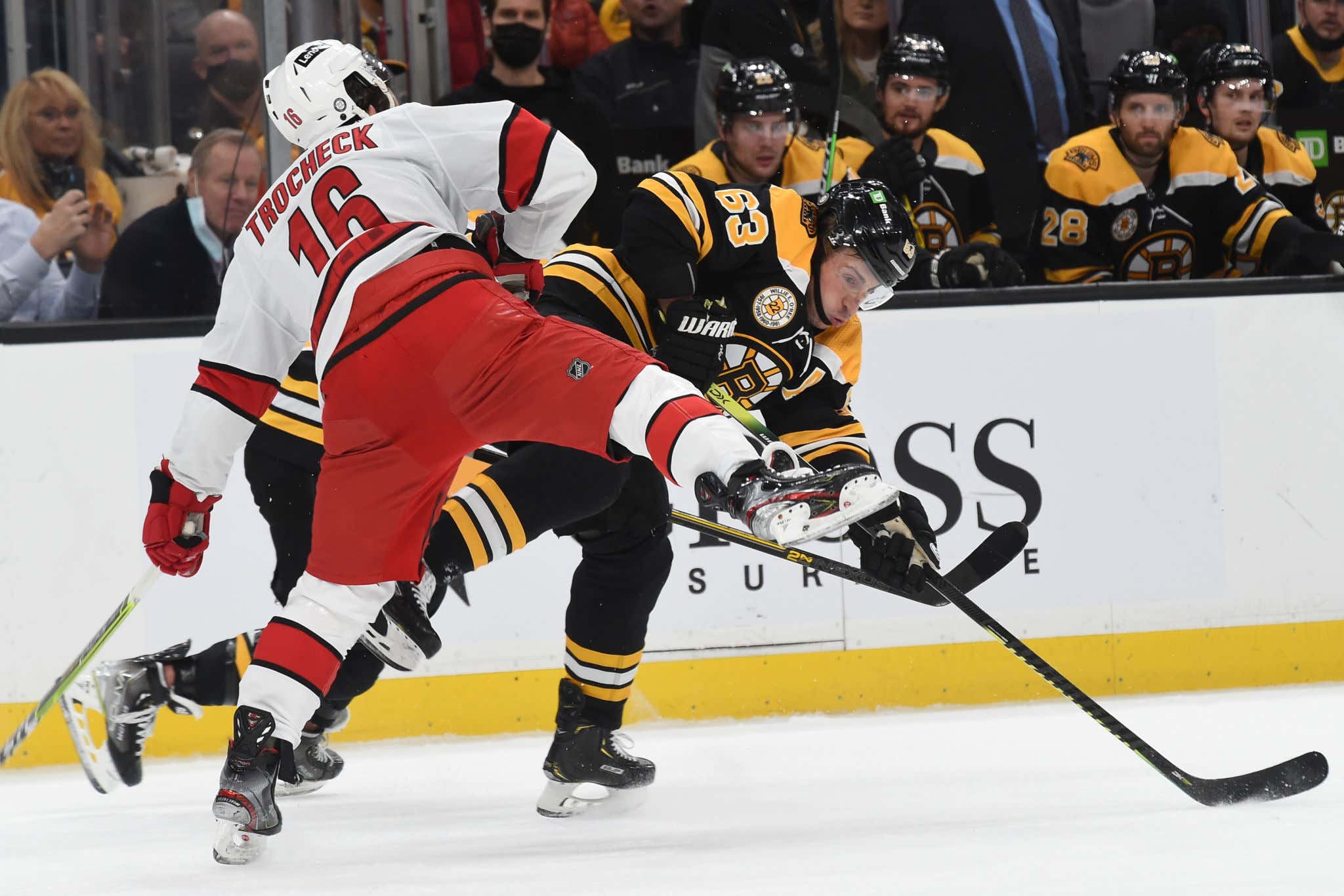 Let's rewind the clock about 24 hours to set the stage here, shall we?

It all starts when Carolina Hurricanes' forward Vincent Trocheck was asked about the similarities between his game and Brad Marchand's. To which Vinny T responded:

A quality chirp, no doubt. Unless you're a Bruins fan who eats, shits, and breathes everything B's, the first thing you associate Brad Marchand with is a rat. Helluva player no doubt about it. But the first word to come to mind is a rat.

The thing about Marchand, however, is that he's got some dog in him as well. So he likes to yap back. He took Trocheck's decent chirp and came back with an entire flock of birds.

Like comparing a Lambo to a Prius. That's a quality line from Marchand, and he came correct with the stats to back him up. As far as this interaction goes, you have to give the edge to Marchand. The thing is, however…well it's kind of hard to talk that shit on Twitter and then allow this to happen a few hours later in real life.

Dropped by Trocheck en route to the Bruins getting their asses handed to them by Carolina. A ruthless beatdown if I've ever seen one. But what I'll say is that whoever runs the Hurricanes' Twitter account is a total…well I don't know what words we're still allowed to use today but I'll just say a total C. Just an absolutely irritating piece of shit. So Marchand may have lost the battle to Trocheck. He may have lost the game to the Hurricanes. But he wasn't going to lose this fight with some dork on the internet.

The Carolina Hurricanes can say all they want. Top team in the Metro division. Best goal differential in the league. A couple of budding superstars on the roster with Svechnikov and Aho. But at the end of the day they're a 2nd rate organization, and a broke one at that. Win as many games as they want, the Hurricanes still can't generate revenue and it's Brad Marchand's $6.125M AAV that pays for them. At the end of the day, a 7-1 win is only worth 2 points in the standings regardless of how much of an ass beating it was. But Marchand dropping the truth like that? Well the truth stings a shit ton more than a loss in January.