As we get further removed from a season that ended in a football Fukushima - not just on the final night but really the five games  that came after the bye week - we can start to get a bigger picture, Google Earth view of everything that transpired. While I hate to use the word because it's so overdone, with time comes ... perspective. [Wretch.]

One of the things I've been hearing a lot of as nerves were still raw and everyone still had their blood up after that total de-pantsing Saturday night is that this all some how falls on Mac Jones. That he hit the rookie wall or that his arm isn't strong enough or even that the Patriots should trade him. Or, according to a text chain I'm a part of, that all the problems of the last month can be traced back to the fact they didn't give a 42 year old Tom Brady a five-year contract.

While I say that if you look around the league at other recently drafted guys who being developed with the expectation they'd be franchise quarterbacks, you get a better appreciation for what we just witnessed with Jones. There are rumors Cleveland is ready to move on from Baker Mayfield. The Dolphins are ready to start over without Tua Tagovailoa. That Kyler Murray might have just gotten Kliff Kingsbury fired because the moment was too big for him last night. I mean, name for me one time Mac Jones looked this shook. forJust one:

Never mind. You can't. Which really is the key to everything. You can go to a QB's Pro Day and run him through the route tree. You can get him at the Combine and measure his measurables and interview him, look him in the eye and look for a window into his soul. But you won't know if he's got the mental toughness, the emotional makeup and the Alpha attitude you need to have him lead a huddle, as well as a scoring drive.

If the 2021 Patriots did nothing else - and I reject that premise because they did a ton of things - they answered that question. So far every veteran on the offensive side of the ball that has spoken, has made it clear they're impressed with what Jones accomplished. And to a man, they're looking forward to getting back to work with him. Including some that we just assumed might not be back.

I'll start with Jones' No. 1 receiver, by far. Jakobi Meyers led the team in targets, receptions and receiving yards. He's spent his three seasons in the league eking out an existence on UDFA money, and finally has the chance to cash in as a restricted free agent. But has made it clear he wants to keep being on the business end of Jones' throws:

Asked if he wants to be here he answered, "Oh yeah. I mean, definitely. I enjoy being here. Honestly, I feel like I've gotten better as a player, as a person, all of it. … When you got a situation like that, it’s something you want to hold on to.”

Ted Karras, who came back as a backup after one year in Miami before grabbing the starting left guard spot and keeping it all year said the same thing, while singling out Jones as a reason why:

“I would always love to come back,” he added. "Obviously, I love being here and love the people here. I feel I fit in well. But, that’s a long way off, for now.”

Brandon Bolden, who reinvented himself at the age of 31 and in his 9th season, posted something on Instagram that sounded very much like a goodbye. Only to correct the record with a whole batting order of crying/laughing emojis. And they don't lie:

Kendrick Bourne, who was maybe the player on the Patriots roster who stepped up the most in Buffalo, with 7 catches on 8 targets, 77 yards and his team's only two touchdowns, said everything you'd want to hear from a veteran about how he likes being led by the rookie. That he's all about team goals, that making the playoff in their first year together is an accomplishment they're proud of, but he expects bigger things ahead:

And Jones other most significant free agent acquisition and favorite red zone target went even a step further: 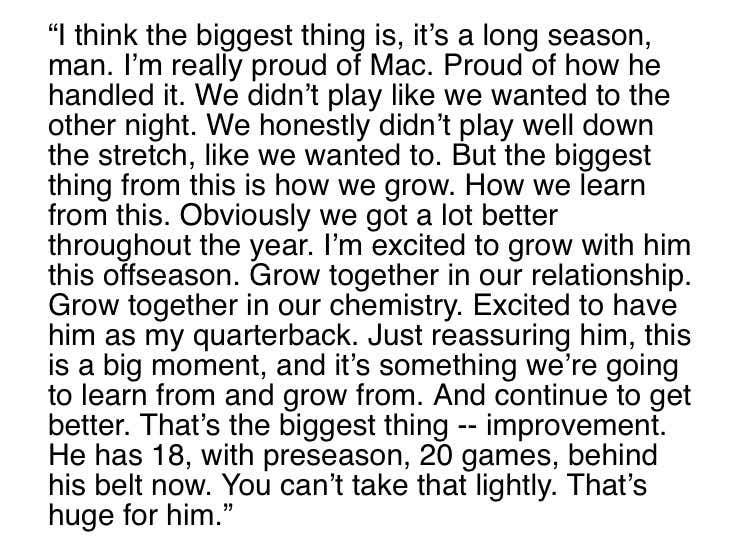 I'll end with Matthew Slater. Who, while technically is listed as a wide receiver on the official roster, is officially the best special teams player and ultra-leader on a team full of them. It's been assumed that he's a candidate for retirement. But to hear him talk, he might have more football in him:

As well as an appreciation for having the one franchise he's ever played for in his now 13 year career land the quarterback they need to get back on top. “My kids and I will be watching him for a long time to come,” he said. "I think the future is bright with this organization with that young man, not just with his play on the field but with the character that he possesses. He’s the type of player you hope to build around.”

Meyers. Karras. Bolden. Bourne. Henry. Slater. And we've barely begun to scratch the surface of how many Patriots veterans feel about the future. Or of Jones' prospects going forward as he spends his second year in the program. And takes that next step into improving and maturing. Saturday night's result doesn't suck any less. Nor should it. But this is a team that knows its future is unlimited as it builds around Mac Jones. You should too.