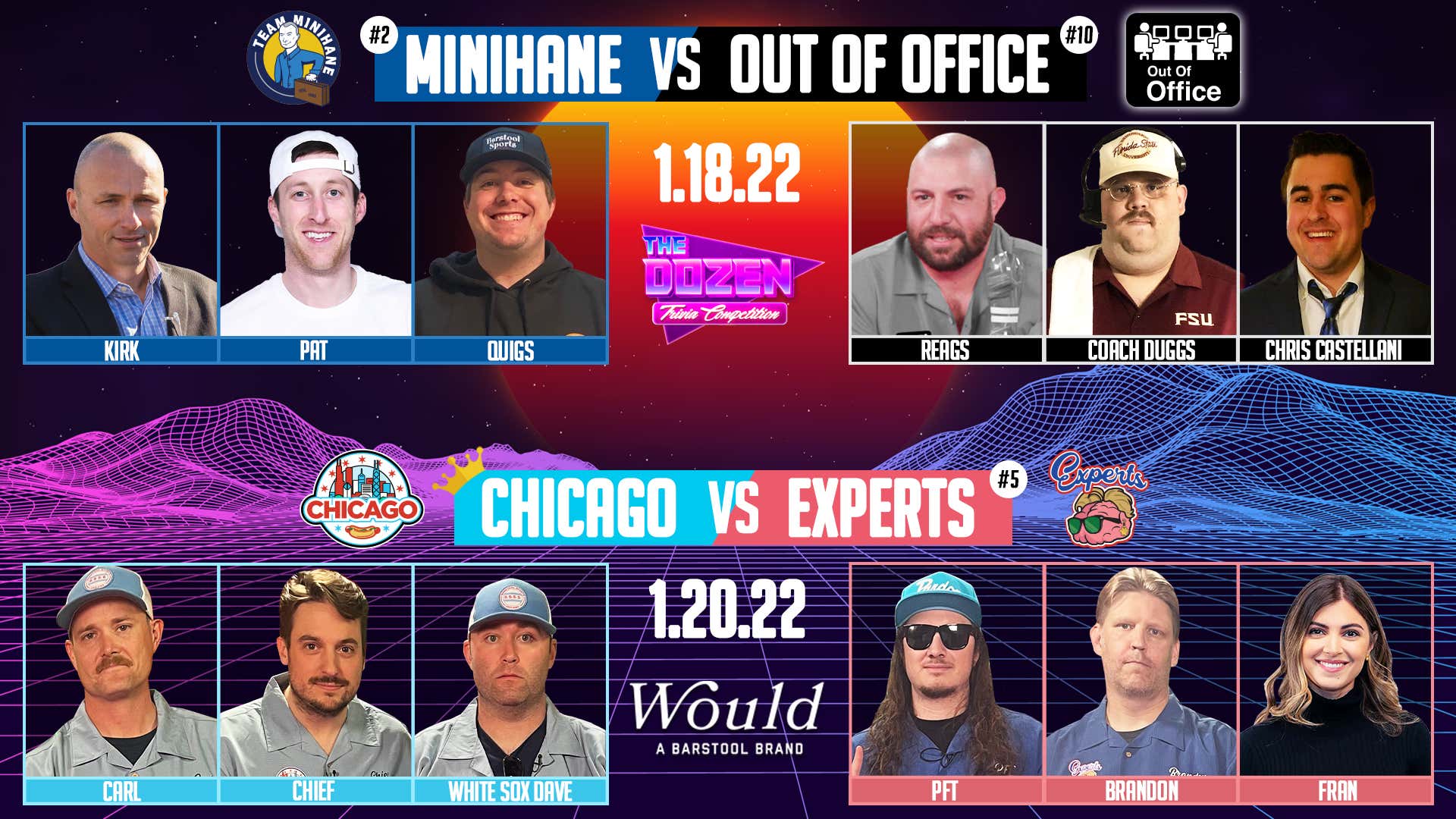 Just one week after signing with team Out of Office, Kelly Keegs has been traded to the Misfits in exchange for powerhouse player Bobby Reagan, aka Reags. As a Player-GM, Reags is the one who executed the trade for himself, a very Roger Dorn-esque move. The Final Answer Person typically doubles as the Team Captain, though I really would be okay with anyone making a move, if they wanted to do so. Some teams have multiple captains, usually the original teams, such as The Yak (Big Cat and Rone), The Experts (Brandon and PFT), or Chicago (all three of the boys).

Last season, the Misfits went on a Cinderella-run to the Dozen Championship, fueled largely by Reags as their star player. While Reags has continued to be a force in Season 2 (averaging 5.67 points per match), the Misfits have hit a skid, putting up a 2-4-0 record this season and simply lacking cohesion as a team. During the Misfits tournament run, one of the biggest storylines was Dante doubting Hank's loyalty to their team and his trivia abilities. They seemed to patch things over, but clearly Reags had other ideas…

MY THOUGHT PROCESS AS COMMISSIONER: There was talk about Keegs being swapped with Jake Marsh for 16-Gen XYZ, but then Reags reached out to me on a trade idea. I told him swapping Dante or Hank for Chris Castellani wasn't allowed, so he then asked if he could trade himself. I told him yes, the two guys linked up, and the rest is history.

I think this trade is far fairer than people realize. While Reags is strong and will be tough to replace for The Misfits (currently ranked 13th), Kelly Keegs automatically makes them one of the strongest pop culture teams in the league, especially in any Music-related category. Dante is probably the best mind at current music, and now adding Kelly, they have the top two players in that category. She will also bring in a few niche categories, including Harry Potter, which might be a Minihane-level knowledge base for the new The Misfits player. It's also worth noting that Kelly Keegs isn't replacing Reags for categories such as College Basketball because those types of questions likely would now only show up when their opponent has it as a niche category. That's the beauty (or, chaos?) of The Dozen, no matter how good a team can be, I always write the matches to even out the team's various strengths.

Reags, on the other hand, is a good replacement for the departing Joey Mulinaro, but he also doesn't boast the pop culture knowledge that Joey leaves behind. How much of a factor will that play for the future of the 10th ranked Out of Office? We shall see…

Now, despite my thoughts on the matter, Hank and Dante were none too pleased with the news, and both Reags and I took some shots yesterday:

My heat cut off in my apartment last night, and I am not totally convinced it wasn't Hank and Dante pulling a Harry and Marv to mess with me. Regardless, they've added a player in Kelly Keegs who has been dying for a shot at being on a big The Dozen team for a while…

I think 10-Out of Office will be fine, if not a little less sturdy than when they had Joey Mulinaro, and I think 13-The Misfits are being wildly underrated following this trade. They might have to work out a few early issues, but The Misfits are going to have a completely different gameplay and style in the next few months.

Quigs stepped up and played for Team Minihane during their Crown defense against the Big Screamin’ Honkers when Kirk was on his leave of absence. Even though they lost, Quigs knocked down some points in Technology and his Niche (The Principles of Flight). With Rico Bosco suspended, the official unofficial 4th member of Team Minihane steps up again to help Team Minihane face the new Out of Office.

Kirk is the highest-scoring player in the league and a dominant force nobody wants to face. However, this new Out of Office team potentially has the skill-set to neutralize Kirk’s scoring. Typically, Kirk is dominant in categories such as Golf, Television, and Movies and can sweep them with ease. Except Castellani is a film guy, he and Reags have decent television knowledge, and Reags is a Golf guy who shocked Kirk last season in the tournament when he made a clutch last-second pull in Kirk’s niche category. Not having Rico Bosco for College Sports when that is Reags’ bread & butter hurts Team Minihane too.

After all the drama, The Experts finally get their shot at the Crown against Team Chicago. The original Dozen rivalry now has a title on the line.

Chicago’s ascension to the Crown has come via gritty close-wins in low-scoring affairs. They haven’t scored higher than 11 points during their three-game win streak. Of teams currently ranked in the Top 12, Chicago is last in points per match, steals per match, and has only converted 1/7 niche questions this season. By the numbers, you can look at Chicago and call them lucky. Watching them play, though, they have heart, team chemistry, and they always believe they are in the game. You look at the Experts, and even though they average a lot of points (over 11 a game), we have seen Brandon blow up in anger after going down two points, PFT distracts them with obviously wrong answers, and even after thousands of games, they have lousy game instincts on when to use the Double Dip and Phone-A-Friend advantages.

Either way, one of the Dozen’s original teams will walk away with the Crown. After 170+ matches and so many new teams and players, it’s great when you can replay the classics. 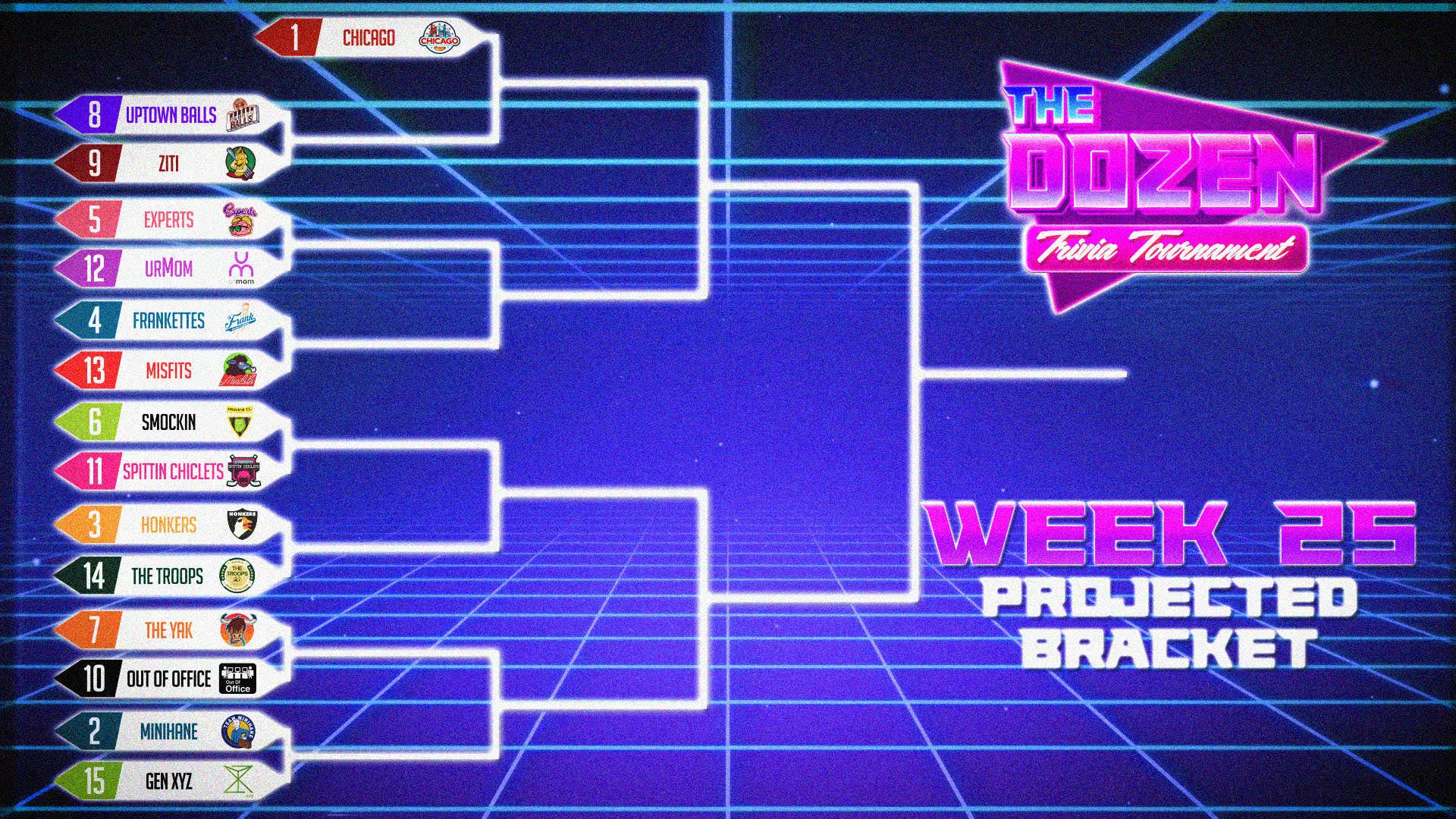 Make sure to vote for The Dozen All-Star Week…