MSN - Residents along the banks of the Rideau River were credited for thinking fast after they used a kayak to save a driver whose vehicle went through the ice in Manotick on Sunday afternoon.

But the focus quickly turned to the driver — not over the rescue, but over why she had been driving on the river in the first place. Comments on Twitter indicate she may have driven north on the river from Kemptville, 30 kilometres away.

Everyone is so quick to call this woman crazy. To speculate about potential mental health issues like they were Sigmund Freud and not "random Twitter user eating Cheetos on faux-leather couch." To jump to the conclusion that she's high on drugs and drunk on alcohol. How else to explain the reasoning behind driving your yellow Subaru 60 kph across a frozen pond as stunned children playing ice hockey dive for cover? For calmly posing for selfies as the car rapidly sinks beneath your feet, more worried about hitting your angles than the freezing cold, hypothermia-inducing water?

I remember when a perfectly fine answer to "why'd you do it?" was simply: "for the story." 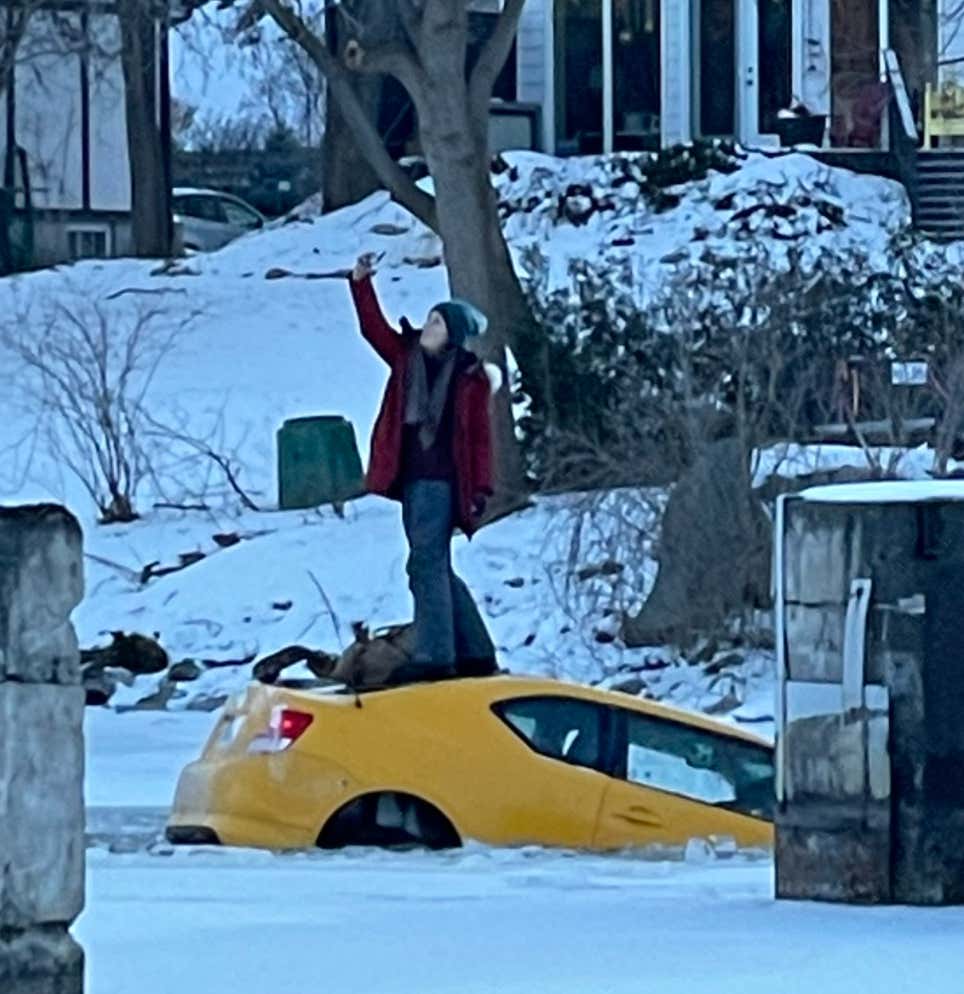 Yellow Subarus are replaceable: that selfie is once in a lifetime.

Unless she does it again I guess. Which I wouldn't rule out. In fact I'd likely bet on her doing it again.

Why am I so confident? Per one of the rescuers in a TV interview, upon being rescued at quite literally the last second, as the brave neighbors gasped for air after sprinting out to save her life, she said: "I would do THAT again!"

He made a point to say this was verbatim.

Ottawa paramedics also went to the scene, but said the lone occupant of the vehicle did not want to be assessed, and police said the driver was not injured.

"She looked at us and was like, 'I'd do that again!' Those exact words, just like that" (CNN interview)

I like to think they turned around and she was just gone, vanished, living on only in local legend: the woman who DGAF about speeding over a body of water like it was a highway and snapping selfies when she plunged through it.  Used as a lesson for the uptight kids, how some people aren't content to just do their little life, sit in their little cubicle, tap tap tapping at their little keyboard then commuting back to their little apartment, day after day after day. Some people need to LIVE. To feel the breeze through their hair, the metal beneath their feet (more and more beneath their feet, literally, because it's sinking into an ice pond.)

Some people only live to get radical.

Of course in reality I'm pretty positive she was taken into custody and assessed for her pretty clear mental-health issues.