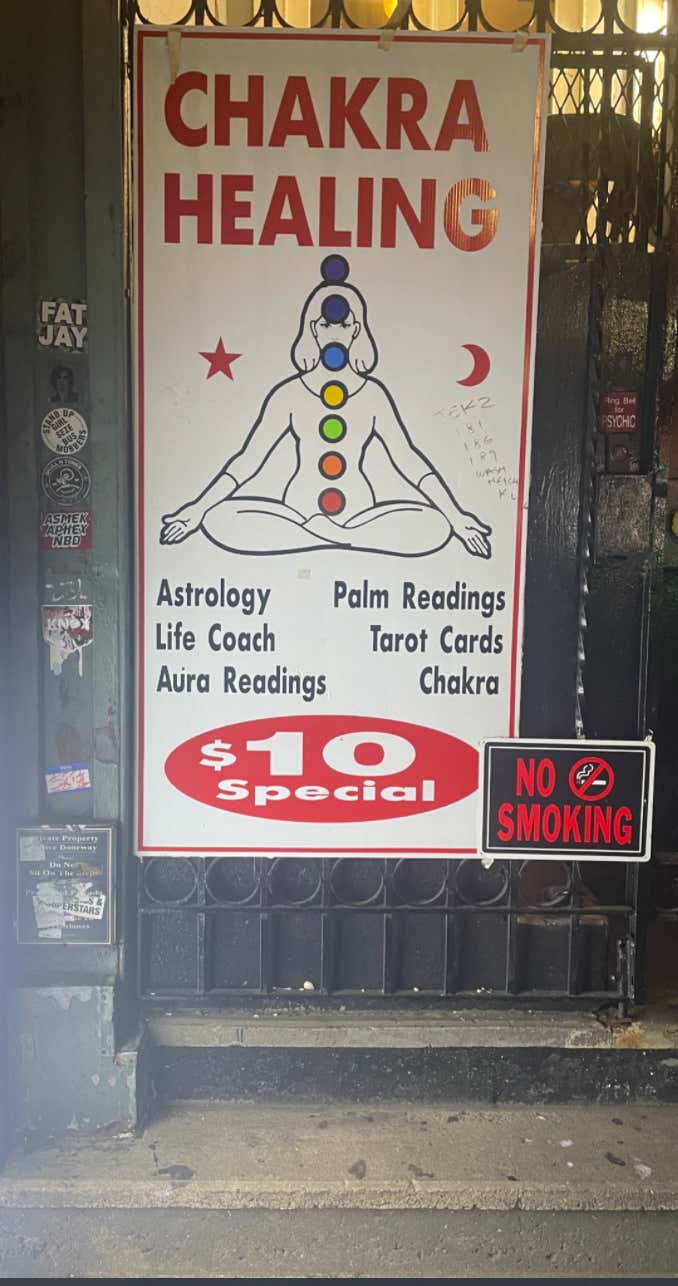 By a bar I frequent there’s a ragged, graffitied sign strapped to iron bars that reads “Chakra Healing. $10 Special. Walk-ins welcome.” I have no idea what your standard chakra re-alignment costs but given the presentation and fact that this particular establishment doesn’t appear on google, or seem to have a name, I figured that was on the low end of chakra pricing.

For over a year it’s intrigued me. Beckoned me, even. Day after day, night after night, I’d walk by this place and a few weeks ago I decided it was time to get healed. I googled what a chakra even was, so I could go in with some knowledge, and it is quite confusing. For starters it’s fake. Hard to take something too seriously when the explanation starts with “DISCLAIMER: there’s literally no evidence any of this means fuck.” For seconds there are seven of them and they range from controlling your inner truth and self-esteem to your digestive system. The chakras have a lot on their plate. A few blocked chakras can give you both severe depression and diarrhea, so I figured it was worth a shot to clear the pipes and try turning this franchise around.

Like anything you do for the first time, it was stressful as hell. My primary concern was that I didn’t have a clue what to wear to a chakra healing? I also didn’t know if I should shower before because, despite not knowing what a chakra healing even entailed, I assumed I’d need a shower after and two showers that quickly seemed wasteful? I don’t know. I stress about innocuous things. I opted for no shower and sweatpants. A lot of unnecessary fretting for a guy who planned to leave his house in a state that says “I do not have a house.”

I walked right up to the iron gate and realized the sign did not say what button to buzz. There was a button for a psychic, a button whose silliness was not lost on me, in the building but nothing for the chakra healer. Flustered I called the psychic on the phone and asked her to point me in the direction of the chakra people. She said she was the one who did both. Of course she did both, you idiot. I always wondered how all these psychic places make rent and they do it by doing everything. Chakras, psychics, life coaches, tarot cards, palm readings, talk to your dead relatives, anything that can’t be quantified they’ll do it. “Oh. Uhhhh ok I’ll be by soon,” I said but she informed me she was booked solid until 7 PM. Ten dollar chakra healings fly off the shelves, it seems.

I went back home, sat on the couch, and wondered if I should shower or change out of my sweatpants until 7.

Unshowered I arrived back at 6:50. Early, as I didn’t want to start a chakraing off on the wrong foot. I pressed the button beneath the small sign that read “Ring Bell for Psychic” and waited. I assumed she was with her 6 o’clock appointment so I wasn’t bothered but this establishment was right by a bus stop and the sun was down so there were people with undiagnosed mental illness everywhere. One man limped around picking up cigarette buts and putting them in his mouth, unlit, while another white gentleman dragged luggage and screamed about his Jamaican ancestry, a bloodline I found suspect at best.

Eventually a man, who I assumed to be her 6 o’clock appointment, came out of the building. He was in sweatpants so I was happy to learn I’d nailed my outfit, but to be sexist I was shocked to see it was a man. In my mind I was to be the first man to ever have his chakra healed. Certainly the first probably straight man, at least. I gave her a few minutes to compose herself and rang the bell again and waited.

When a second gentleman exited it finally struck me that there also might be apartments in the building, so I grabbed the door before it shut and went up myself. The psychic’s office (idk what you call them?) was before entering the residential portion of the building and was where everyone dumped their trash. I pushed through a pile Amazon Prime boxes, two folding chairs, a Fischer Price basketball hoop, and a Paw Patrol box to ring yet another bell. Still no answer. I knocked. No answer.

I peered through the blinds, which were in absolute shambles, and saw a marble table in the center of a room that had opium den decor but also a hoverboard in the corner? The ones from like Christmas of 2017 that broke your grandma's hip and started a series of unfortunate events that would lead to her eventual death? I could also hear screams and R&B music, but I couldn’t tell if it was coming from inside or the bar below. Simply put, it was fuckin chaos in there. If someone had asked “what’s out of place in this image?” the answer would have been “everything.”

The longer I stood there the more residents walked in, the more residents that walked in the more embarrassed I got, “Look at that probably straight dude getting his chakra aligned, what’s wrong with him” they were thinking. I decided one more knock and that was it, I was out of there.

But at this stage I wanted to complete the healing just so I'd have a reason to talk about what had happened up until now. I’d come this far and I didn't want it to be for nothing. So when I got outside again I sat with my homeless people and said I’d give it 15 more minutes of me ringing the psychic’s bell. Alas, there was never an answer. I went home with my chakra as off the rails as ever after sitting on a stoop, or standing in a pile of trash, for the better part an hour.

Saturday. There was a Bruins game at 1, Raiders/Bengals at 4, and Pats at 8. I didn’t have time to deal with chakra nonsense. A mistake that would prove fatal for the Patriots, as the game undoubtedly would have gone differently if I’d gotten a tune up.

Sunday. I woke up feeling hungover, despite not drinking the night before, from all the candy I’d consumed. I rolled out of bed and begrudgingly acknowledged it was chakra time. I didn’t even want to do it anymore, this chakra healing was simply coming from a place of spite. I’d been to the door twice and hadn’t so much as seen a person. But today? Today it was going down. I called the psychic again, to make another appointment, and she answered the phone to tell me that she was closed.

When I’d been two nights prior I noticed a door in the corner of the room, a door I suspected was where she lived, and answering the phone to tell me you were closed all but confirmed it.

Monday. Today, it was happening. TODAY. TO. DAY. I was getting my chakra healed. There were no games for me to watch and surely the psychic wouldn’t be busy in the middle of the day on a Monday. Even pushed back the recording of a podcast so I could get it done. Again, I didn’t even want to anymore I just wasn’t letting this lady push me around the ring. I was so confident this would be a breeze that I didn’t even make an appointment, I just sauntered over.

The first gate was wide open, initial hurdle cleared. The blinds to the office (?) door were raised, no doubt implying she was at least around, and I could finally taste my chakras being cleared. I rang the bell and waited for what I knew would be the final time.

The door, the one I suspected lead to the psychic’s apartment, flung open and out strolled… a barefoot, bald man in pajama pants and a t-shirt. Not quite what I had in mind for my psychic after growing up on Miss Cleo commercials. He opened the door to me and, while wiping sleep from his eyes, asked what I wanted. I told him my chakras were down in a bad way and he said he’d call Mindy (weak name for a psychic). He got his phone out of his pocket and rang here up, which was cute because I knew she was just on the other side of that door laying in bed and he could've just hollered to her. After talking to her he said it would cost $300 to get my chakras healed, a jump up from the $10 price advertised on the sign out front.

I’m a sucker, arguably one of the biggest suckers in the history of the world, but a barefoot man telling me it’s gonna cost $300 to get lied to is where I draw the line. Luckily, I hadn’t crossed the threshold into the office (?) yet because if I had I probably would’ve said OK, but since I was still technically outside I found it quite easy to say “ya know what? I’m all set.”

That’s where my chakra journey will end. My mother was very excited about it, she said to have them work on my crown chakra first, so I’ll disappoint her again but that’s that. I’m out. My chakra will forever be in disrepair because I’m pretty sure it’s a scam anyway.

Note: I'm trying to do things aside from just hang out in bars. I think every adult goes through this phase a few times in their lives, before inevitably realizing bars and home are the only good places on earth, but it's where I'm at right now. I'm not trying to go to the Balkans or become a Navy SEAL but I'm trying to extend outside the comfort zone just a smidge, so if you've got any recommendations on pretty basic but slightly out of the ordinary shit to do, send me a tweet. Thank you.