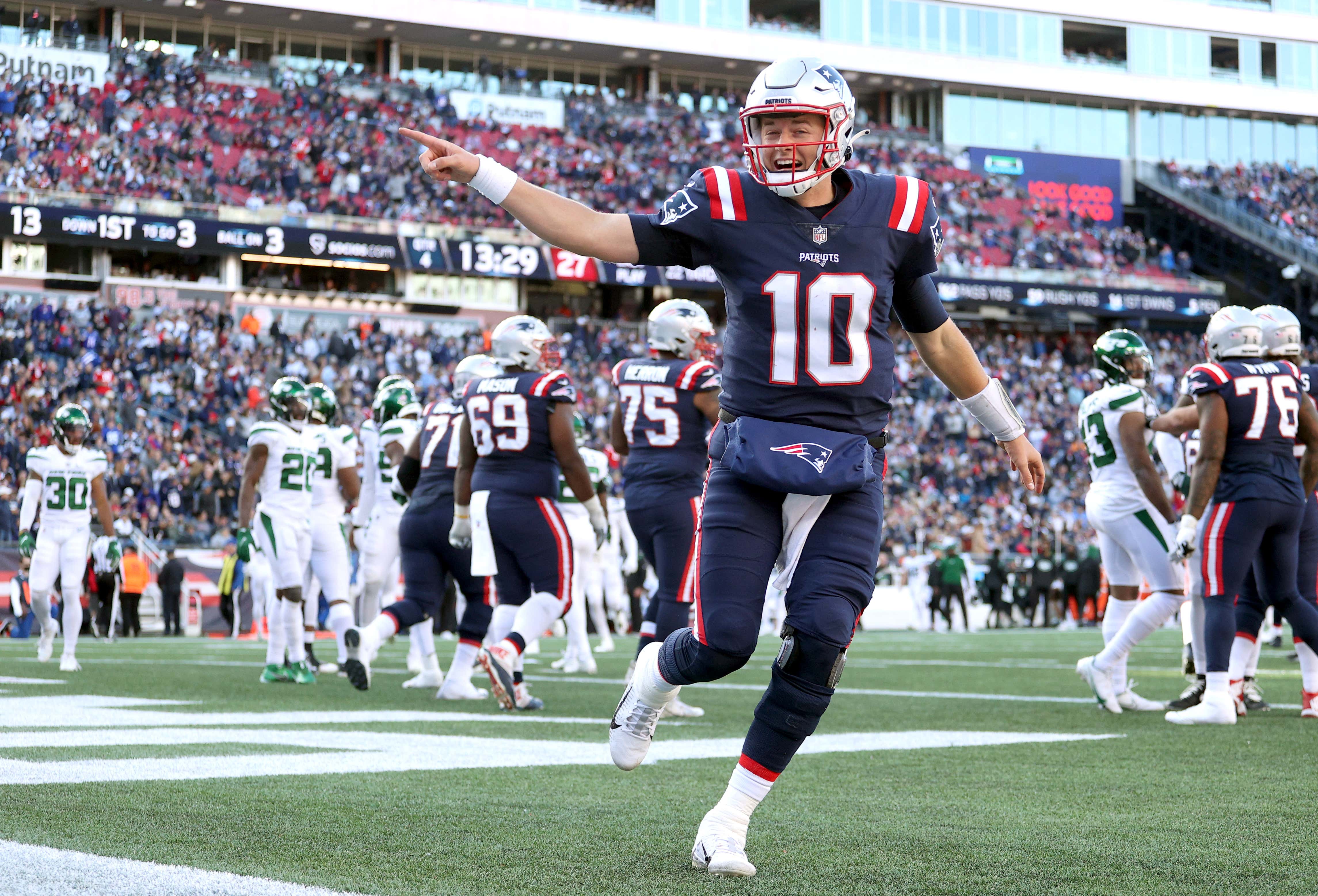 If my research is correct (always a dubious assertion, because what, I'm supposed to be Norman Osborne all of a sudden?), Mac Jones will be the 22nd rookie quarterback to start an NFL playoff game in the Super Bowl era. It's a little murky, since some "rookies" on the list were CFL veterans, some were injury replacements, and so on. But however you define the terms, it's a rare occurrence. And even rarer still that a rookie wins the job in training camp, starts the whole season and leads his team to the playoffs. The last QB to start every game of his first season and a playoff game was Dak Prescott in 2016. And technically he got the job when Tony Romo hurt his back. The last guy to win both his QB1 job outright and at least one playoff game was Russell Wilson in 2012. And overall, 12 of the previous 21 rookie QBs, 57.1%,  were one-and-dones in the postseason.

So if past is prologue, it's fair to say that Mac Jones is facing a steep, frozen, slippery learning curve this weekend. Even if you allow for the fact that last year at Alabama, he played in what was essentially three NFL playoff game simulations: The SEC championship, the Rose Bowl, and the National championship. And scored an average of 45 points. But even giving him the benefit of that doubt, he's got a lot to prove in Buffalo.

And depending on who you listen to, "doubt" is the operative word. ESPN (paywall) did a power ranking of all 14 starting QBs in the tournament, based on these criteria:

I'm relying on a variety of advanced metrics. Note that I am are considering these quarterbacks in a vacuum: Imagine they had the same team around them and were facing the same set of opponents. First and foremost, Total QBR -- which is ESPN's expected points added-based rate stat that accounts for important context when evaluating efficiency. Straight up EPA, metrics from NFL Next Gen Stats (most notably, completion percentage over expectation, or CPOE) and our predictive QB EPA rating (an input into ESPN's Football Power Index) were all consulted as well. Plus, there's a dash of my own judgment, of course.

By that criteria, Patrick Mahomes is No. 1, Tom Brady is second, Jimmy Garoppolo is 11th, and just behind him is where you'll find Mac Jones. And ahead of only Ben Roethlisberger and Jalen Hurts:

Season at a glance: Jones had a very good season as a rookie, but he is ranked this low on this list because, when compared to all other starting QBs, that strong rookie season was more or less average. He ranked 16th in QBR to finish the year.

Strength: Short passing game. Jones had the sixth-best QBR and CPOE on passes under 10 air yards. And while he didn’t do it a lot, Jones was very efficient when throwing on the run with the second-best QBR on those plays and the seventh-most EPA.

Weakness: Play-action passing. Jones’ numbers took a dive relative to his peers on play-action. He ranked just 24th in QBR (and 23rd in total EPA) on those plays. A split like this in a rookie year could just be a sample thing (same with the aforementioned throws on the run), but it’s worth keeping an eye on.

What’s at stake for Jones (via Patriots reporter Mike Reiss): Valuable experience. In the end, that’s what the playoffs are all about for Jones. While the Patriots have high internal expectations, and nothing short of a Super Bowl championship is the goal, that Jones gets to experience high-stakes postseason football in his first year is a huge big-picture victory for the franchise.

If you're expecting me to throw on my Patriots No. 10 jersey and scream into my keyboard, you've come to the wrong blog, there sport. I'm all about Jones earning respect, not having it given to him. Like that "Yellowstone" where John and Kasey Dutton take Kasey's son out deer hunting, Jones is the boy who has to be blooded with his first kill to become a man in this league. I wouldn't have it any other way. It's the code of the warrior.

I will just add this though. If ESPN's case for Jones' biggest weakness is his play-action, I will not only accept it, I'll embrace it. Because if anything, it's been a major strength of his game. From the start of camp, through joint practices, into preseason and all year, he's run that element of the McOffense like a seasoned veteran.

I'll see your QBR metrics, and I'll raise you Pro Football Focus's numbers. In play action, with a minimum of 100 attempts, Jones ranked:

So if that's his "weakness" right now, I'll take it. While echoing what Mike Reiss says about, that while the focus here is winning, the ancillary benefit of giving the new face of the franchise his first taste of the playoffs is invaluable The QB on the other side of the field got his first taste in his second season before winning twice last year. So there's a huge experience gap that can only be closed with a win. And possibly boner medicine:

I'll leave that up to the Patriots training staff. What I do know is that going into this one, Jones is ten times the quarterback that Josh Allen was at the same point in his career. In fact, it might not even be that close:

We'll know a lot more in about 36 hours. Damn, it feels good to be back in the playoffs. One year without it was one year too many.