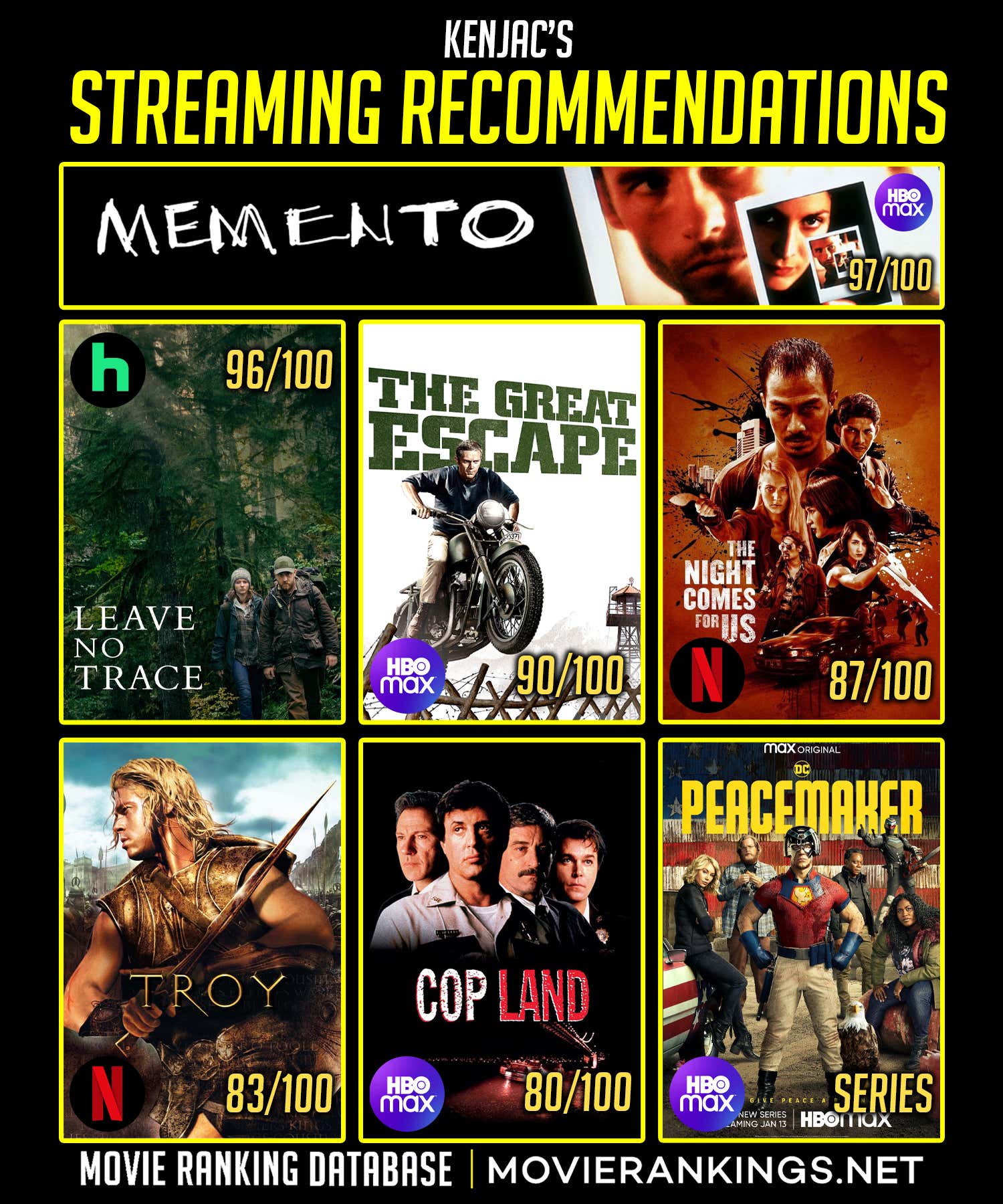 I unabashedly loved this movie. In fact, I think if they cut the Achilles romance sub-plot and just tightened up the ending, people would look back at this movie like it was genius. It has really solid performances across the board, awesome, large-scale Warfare that has a much better balance of practical:CGI than anything to come after it and has one of the coolest single fight scenes ever in my opinion.

When a Hollywood star mysteriously disappears in the middle of filming, the studio sends their "fixer" to get him back. Set in the 1950s, the story was inspired by the career of Eddie Mannix (1891–1963).

This movie doesn't jump out as being the Coen Brother's best, but I think it has a lot of great moments. Clooney crushes is, as does Ralph Fiennes. This scene in-particular always gets me.

After sparing a girl's life during a massacre, an elite Triad assassin is targeted by an onslaught of murderous gangsters.

This is a really brutal Indonesian action thriller that has some of the cooler fight scenes you'll ever watch. It stars a lot of the same dudes as 'The Raid' including Iko Uwais and Joe Taslim, and they are just brilliant at what they do. If you liked The Raid, I think you will like this too.

Charlie Kenton is a washed-up fighter who retired from the ring when robots took over the sport. After his robot is trashed, he reluctantly teams up with his estranged son to rebuild and train an unlikely contender.

This movie just got the green light for a Disney+ series and I'm actually kind of excited about it. As you can see from my score, I think there are some objectivly tough parts to this movie. It's cookie cutter and the kid actor kind of sucked. But the special effects and actual robot fights are top-notch and I appreciate the shit out of that.

Leonard Shelby is tracking down the man who raped and murdered his wife. The difficulty of locating his wife's killer, however, is compounded by the fact that he suffers from a rare, untreatable form of short-term memory loss. Although he can recall details of life before his accident, Leonard cannot remember what happened fifteen minutes ago, where he's going, or why.

Most Nolan fans have seen Memento and appreciate how it might actually be his best movie. For those of you that haven't seen it, though, I highly recommend checking it out. It shows you how great of a storyteller Nolan is even without the bells and whistles of a big budget.

Freddy Heflin is the sheriff of a place everyone calls “Cop Land” — a small and seemingly peaceful town populated by the big city police officers he’s long admired. Yet something ugly is taking place behind the town’s peaceful facade. And when Freddy uncovers a massive, deadly conspiracy among these local residents, he is forced to take action and make a dangerous choice between protecting his idols and upholding the law.

I am an absolute sucker for this movie. I feel like it doesn't get the respect it deserves for a movie that stars that many big hitters and has as many good moments as it does. This movie was also the proving ground for director James Mangold, who went on to make Logan, Walk the Line, Ford v Ferrari, and 3:10 to Yuma. He is also directing the next Indiana Jones movie.

A father and daughter live a perfect but mysterious existence in Forest Park, a beautiful nature reserve near Portland, Oregon, rarely making contact with the world. But when a small mistake tips them off to authorities, they are sent on an increasingly erratic journey in search of a place to call their own.

This is one of my favorite movies from the past few years. Ben Foster, who you probably know as the psychopath brother from Hell or High Water, is absolutley exceptional in this role as a suffering Veteran who is just trying to do right by his daughter. Thomasin McKenzie also put herself squarely on the map in this, later going on to star in Jojo Rabbit and Last Night in Soho.

Lexington, Kentucky, 2004. Four young men attempt to execute one of the most audacious art heists in the history of the United States.

If heist movies make it move for you at all, this is a movie you will love. Great cast, great pacing and a REALLY good heist scene.

The Nazis, exasperated at the number of escapes from their prison camps by a relatively small number of Allied prisoners, relocate them to a high-security 'escape-proof' camp to sit out the remainder of the war. Undaunted, the prisoners plan one of the most ambitious escape attempts of World War II. Based on a true story.

This is one of my all-time favorite older movies and for good reason. It stars a murderer's row of actors, has great drama and a killer soundtrack. I must have watched this, Patton and the Dirty Dozen with my dad 200 times over the years and I've only liked the 3 of them more with time. I also had The Great Escape game on PS2 and it sneaky rocked.

Royal Tenenbaum and his wife Etheline had three children and then they separated. All three children are extraordinary --- all geniuses. Virtually all memory of the brilliance of the young Tenenbaums was subsequently erased by two decades of betrayal, failure, and disaster. Most of this was generally considered to be their father's fault. "The Royal Tenenbaums" is the story of the family's sudden, unexpected reunion one recent winter.

Look, Wes Anderson is an acquired taste. Not everyone is into his style and that is totally fair. That said, I think this movie and Bottle Rocket are probably the most digestible works of his for those who haven't seen anything of his before.

1. Peacemaker - HBO Max: I finished all three of the available episodes and I absolutely love it. Cena crushes the role and it had really good humor, some solid fights and a REALLY good soundtrack. It almost reminds me of Hot Rod because of the glam rock, dancing, off-beat humor and the dynamic of Peacemaker and Vigilante which reminds me of Rod and Kevin.

2. The Mayor of Kingstown - Paramount+: This show, which is from the mind that made Hell or High Water, Sicario, Hell or High Water and Yellowstone, took me a while to figure out. I really had no idea what the fuck was going on in the first few episodes, but it settled into its own and had a killer back half to the season.

3. Black Sails- Hulu: I'm just going to keep recommending this show because it is one of my favorite shows of all time. I'm not a person that is particularly interested in pirates, but this one had me drawn all the way in from start to finish. Great drama, action, characters and performances. Also a fantastic series ending.