If you ever needed proof that there's a glitch in the Matrix, look no further than this post from the NFL's own state-run social media.

It should be obvious by now that the NFL in particular, and society as a whole, have come a long way since Tom Brady's last MVP in 2017. Four years. Three Super Bowl appearances. Two rings. And about 1,000 miles south-southwest of Foxboro, to be specific. That MVP was given to a guy who was supposedly still disgraced by his 4-game suspension the season before. That was his punishment for running a nefarious plot to bribe low-level and per diem employees of his team with signed merchandize in order to get him to doctor the footballs to his liking. Back then, everything Brady did was still suspect. And the league was still vowing to test every ball of every game and release the data so we'd all know the integrity of the league was beyond reproach. You know, that topic that the country was fixated on for years until Brady's wins and record shattering performances just kept accumulating and now they never want to talk about it when Patriots fans bring it up.

That Tom Brady never had the league posting material like this. Essentially running a free campaign ad promoting his candidacy for their most prestigious regular season award. Which begs the question, what the hell is happening here? From 2016-18, Roger Goodell looked like he'd rather pass trophies through his urethra like a kidney stone than hand one to Brady. Last year was different, because by the end of the season, he just looked relieved to have pulled off a complete schedule in 2020 without having to shut the league down, and would've been fine with handing the Lombardi to Kim Jong Il just to be done with it. But this is such a weird pivot all of a sudden. One that I can't imagine would be made without Ginger Satan's signature of approval, written in blood at the bottom.

Now a cynical man might say that the league isn't interested in the most popular choice for the MVP because Aaron Rodgers flipped the Double Freedom Rockets to the Covid protocols and lied about it. And the last thing a bureaucracy obsessed with its image wants is to be the center of a national debate on the most polarizing topic of the moment, the vaccine. And there's a lot to be said for your argument. The NFL would be smart to keep positioning itself as a distraction from arguments between pro- and anti-vaxxers, not the center of one. If Rodgers gets the award, it's going to be new battle line in this war, everywhere from the cable networks to Howard Stern and Joe Rogan to the page of every unhinged screwball on Facebook. For or against.

How do I make such an argument? Where does one even begin? How about here:

I'll beg to differ about Rodgers causing drama while Brady was just a victim of it. Because there's a vaccine against Antonio Brown, that is 100% effective. And that's simply not putting him on your team. And Brady ignored the science on that. But since those numbers speak for themselves, here are some more that speak even louder: 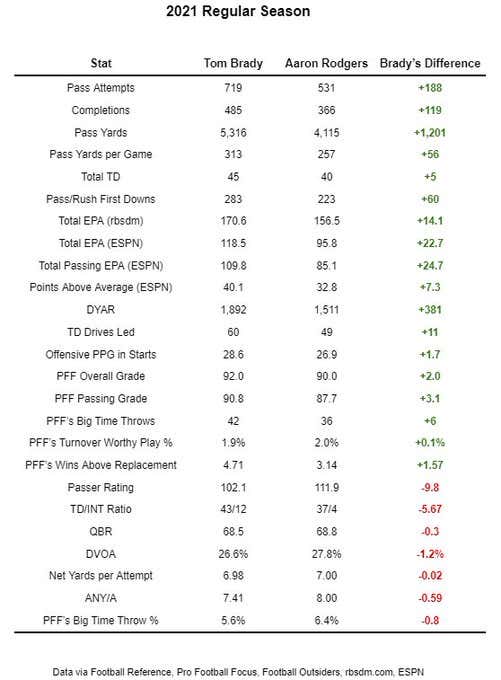 Not to discount those red numbers at the bottom. I'm a big passer rating guy. And think TD/INT ratio is as quick a shorthand as any metric for measuring success. But the black numbers above? That is Brady lapping the field over last year's MVP.

Then there's this little stat. Which, while by no means the Unifying Field Theory of the MVP universe, has traditionally predicted the winner: 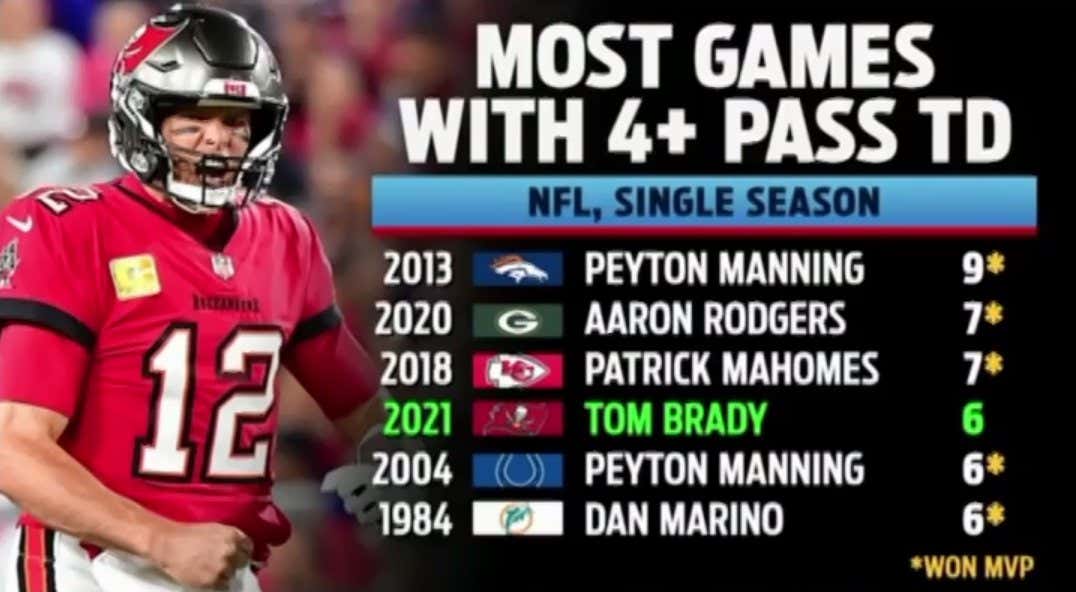 And the analytics crowd agrees:

I could go on, but that would just be belaboring the point. I hope like hell this vote doesn't come down to politics or debates about virology like literally every other conversation we've all had for the last 23 months or so. Let it just be a meritocracy. In which case it's Brady over Rodgers for MVP. With all the electoral votes. And undoubtedly another NFC championship trophy.