Source - Footage has emerged of Madonna, Kanye West and a host of notable celebrities listening to Drake together in LA last night (January 12).

It’s currently unclear what occasion brought the group – who also included former boxer Floyd Mayweather, NFL player Antonio Brown and West’s girlfriend, Julia Fox – together, but footage and photos from the event have since been posted online overnight.

Hollywood Unlocked‘s Jason Lee, who was part of the gathering, shared footage of the moment in question, with West, Madonna and co. filmed listening to Drake’s ‘Come Thru’, a bonus track on his 2013 album ‘Nothing Was The Same’.

I didn't mention Julia Fox or Jason Lee in the title of this blog because they don't matter. They're hanger-ons. The real story is about the four I did mention and why on earth they would be hanging out together at 4:00 AM listening to a 2013 Drake Bonus track. I mean how does that even happen? Did their publicists collude? Are they friends with the owner of the restaurant they were in? I just don't understand what's in it for them. It's not like they're buddies. Sure, they're all mega successful in their fields, but Floyd Mayweather and Madonna don't exactly have a lot in common. Not their politics, not their profession, not anything.

Having said that, it was hilarious to see Madonna vibing so hard. And you can say what you want about her, but she invented the playbook when it comes to being famous. So yeah, it may look a little goofy seeing her on the couch, but she was on world tour while Antonio Brown was nothing more than a glint in his father's eye. Her fame was so massive, so all encompassing, so revolutionary, that she literally impacted American culture the way Kanye thinks he does. But I'm not here to give you a history lesson on Madge. I'm just here to appreciate her in all her glory. Because while some people may be "too cool" to dance on the couch, she's is not... 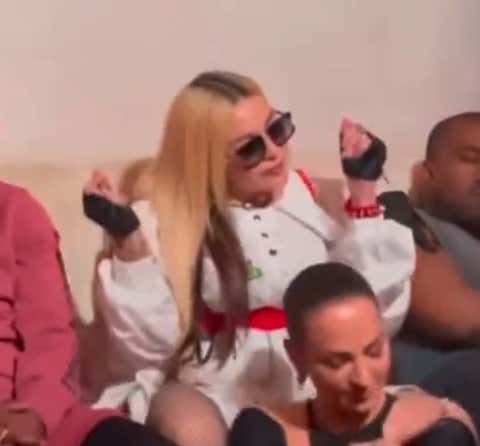 And that's what makes her the GOAT. Now if you'll excuse me I need to go get ready for work. New Out & About drops tomorrow. Take it away, queen…