Ars Technica - Google took to Twitter this weekend to complain that iMessage is just too darn influential with today's kids. The company was responding to a Wall Street Journal report detailing the lock-in and social pressure Apple's walled garden is creating among US teens. iMessage brands texts from iPhone users with a blue background and gives them additional features, while texts from Android phones are shown in green and only have the base SMS feature set. According to the article, "Teens and college students said they dread the ostracism that comes with a green text. The social pressure is palpable, with some reporting being ostracized or singled out after switching away from iPhones." Google feels this is a problem.

"iMessage should not benefit from bullying," the official Android Twitter account wrote. "Texting should bring us together, and the solution exists. Let's fix this as one industry." Google SVP Hiroshi Lockheimer chimed in, too, saying, "Apple's iMessage lock-in is a documented strategy. Using peer pressure and bullying as a way to sell products is disingenuous for a company that has humanity and equity as a core part of its marketing. The standards exist today to fix this."

The "solution" Google is pushing here is RCS, or Rich Communication Services, a GSMA standard from 2008 that has slowly gained traction as an upgrade to SMS. RCS adds typing indicators, user presence, and better image sharing to carrier messaging. It is a 14-year-old carrier standard, though, so it lacks many of the features you would want from a modern messaging service, like end-to-end encryption and support for non-phone devices. Google tries to band-aid over the aging standard with its "Google Messaging" client, but the result is a lot of clunky solutions that don't add up to a good modern messaging service.

Since RCS replaces SMS, Google has been on a campaign to get the industry to make the upgrade. After years of protesting, the US carriers are all onboard, and there is some uptake among the international carriers, too. The biggest holdout is Apple, which only supports SMS through iMessage.

Since day 1 having green bubbles has been a Scarlett letter on men and women alike.

No shit they’ve been peer pressured and shamed to the point it’s affecting sales. Do you have any idea how sawft generation Z is? If one of these kids found out they weren’t included on a group text because nobody can stand the android fucking everything up for everybody (standard operating procedure) they’d have a breakdown.

Best part of this whole thing is Apple digging in and refusing to play nice.

Google clearly views iMessage's popularity as a problem, and the company is hoping this public-shaming campaign will get Apple to change its mind on RCS. But Google giving other companies advice on a messaging strategy is a laughable idea since Google probably has the least credibility of any tech company when it comes to messaging services. If the company really wants to do something about iMessage, it should try competing with it.

One of my best friends- college roommate, I was best man in his wedding (gave an all-time speech, nbd), I'm Godfather to his son, and the more I'm typing out how close we are the worse I'm starting to feel…but the point is, our group of friends completely cut this guy out of all group communications and text chats because he refuses to comply and get an iPhone. It's not even a convenience or preference thing either. He's not some ultra android fan. He's just that spiteful that he will never give in to iPhone. Kind of have to respect it. But in the process, he's been replaced in our fantasy football league because he's totally out of the loop. All because of android.

But that's the kind of line we need to be drawing in the sand. 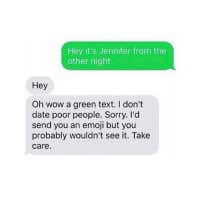