[TMZ] - The crazy scene all went down at the Anaheim 1 Supercross event at Angel Stadium -- when in the upper rows of the venue, a woman flashed her bare chest while holding her beverage with her teeth.

Another woman seemed to be so pissed over the sight ... she left her seat a short time later and confronted the fan, complaining about the topless move.

In a video of the altercation, you can hear the woman say repeatedly, "There's children!"

It's unclear how the situation was resolved ... we reached out to cops and they told us, "We responded to two fight calls in the view level that resulted in ejections but neither mentioned anything about a woman flashing, and no arrests/citations were made in either incident."

Woo buddy, there's a lot to unpack here. First, the flashing move. Here's my first question. Was she trying to show a Supercross athlete? performer? her tits? If so, you're in the upper deck. Let's use some brains here. I don't care if you're as stacked as Salma Hayek, those bad boys are going from upper deck to the show. You're too far away. That's just a geographical problem. If you're not and you're trying to flash a fan? Well, that's a bold move. That's even a crazy move. Just walk up to them like a normal person and show your boobs.

Then there's the second lady. The one who confronts said topless gal. She has a point if there are children are around. A guy never forgets their first set of boobs they see. That's typically reserved for movies or a scrambled channel in your room that you're convinced is a nipple. At least that's how it used to be. Today? Well they probably just go on the Internet and don't have to deal with trying to secretly download on Limewire, correctly deleting history and coming up with a backstory when you 100% got hit with a virus on the family computer. Everyone knew what it was from, but you just always blamed it on the hot new Nelly song you tried to download.

That said, this is a woman who does not give a shit about her surroundings. 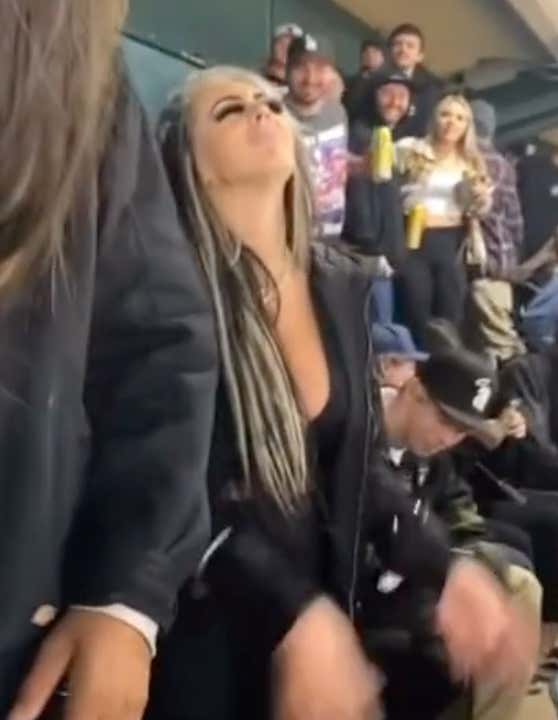 There's a kid legit next to her! But, something tells me she's been in this situation before. Just a classic who cares look. She doesn't give a shit. She was going to show someone, anyone her boobs at that Supercross event. Pretty evident by the fact she went with the cup in the teeth move before lifting the shirt. That's a vet move. That's a Dirk one-legged fadeaway.

Both ladies here have a case which should be settled one-on-one. This is my biggest problem. Everyone else who got involved and tossed drinks? They are the problem. It's a debate. It's left vs right. It's Alabama vs Auburn. It's Kentucky vs Louisville. There's a rivalry there between flashing your tits and protecting everyone in the stands. It doesn't need a third party at all.

Let's just remember this lesson, which seems to be prevalent this week. Don't throw drinks. It will get you in trouble. It will lead to a viral video and possible trending. Oh and pick your spots when you flash. Society has rules.