Nick Saban made it a point to stop the post game press conference last night (over a month ago) and highlight the effort of his players and make it known that one game doesn't define their success or failure.

"They're not defined by one game.”

"I want to let everybody know how proud I am of these two guys."

I imagine there is a consensus of cynical people out there who think Saban knew what he was doing, or was going for the viral moment, etc. I strongly disagree. I think Saban used a difficult situation to create a beautiful teaching point. Some nights your best effort just flat out isn't good enough. Some nights you can play well and still lose. Some nights... instead of you eating the bear, the bear eats you.

It's the most agonizing reality in sports, and it's a horrific feeling when a season ends, but it's what keeps you competing. It's what keeps you in the weight room in the summer, or firing up hundreds of jumpers after a bad night. It's the look on your teammates’ faces when you do get that redemption that you will never forget. Sports are a terrific measure of character, and in a culture that has seemed to abandon measuring winning and losing, Saban's words ...

(Please note - at this point on January 11th, 2022, at 10:45 am - I was told to exit the offices of Barstool Sports for 30 consecutive days as a result of the action of screaming at a coworker and throwing a can at their head. It was an action I regret and apologize for. It's a punishment I deserved, I accepted and will hopefully come back better from. I apologize to everyone for being a bad teammate, and promise to come back stronger than before. I thank Dave, Erika, and Dan for the second chance.

PS - I am continuing therapy, identifying my triggers, and when things get really bad putting on some soft music and taking a nap.)

... are brutally honest, yet compassionate. No his kids shouldn't be defined by one game, however, I don't think he let them off the hook. He knows, and they know, they could have played better last night (over a month ago), and while it will take time to get over that loss, it doesn't define their lives. One bad action, or one loss, should never define anyone's life. With that said, the "ice cream and ping pong" culture that has swept the world should not be embraced either. It's okay to be upset you lost, it's okay to know you can do better the next time, but it's not okay to accept losing culture, and it's not okay to not push yourself. The Little League World Series has done a horrific job of telling the broadcasters to keep saying, "it's okay Team X lost, they'll go wash it off in the pool and have some ice cream and play ping pong." I strongly disagree with that philosophy. Those kids just lost the most important game of their lives. Some may never play a game that important again. Don't teach them to carry it with them as a burden forever, but also don't teach them not to push themselves or accept losing as part of their make up. It makes for weak people.

In closing, the Saban situation last night (over a month ago) reminds me of Rick Majerus after the 1998 National Championship game. In his book "My Life On A Napkin" (if you are looking for a book to read I suggest this one- one of my favorites of all time), his overachieving Utah team lost to Kentucky in a game in which they blew a lead. He went on to say this: 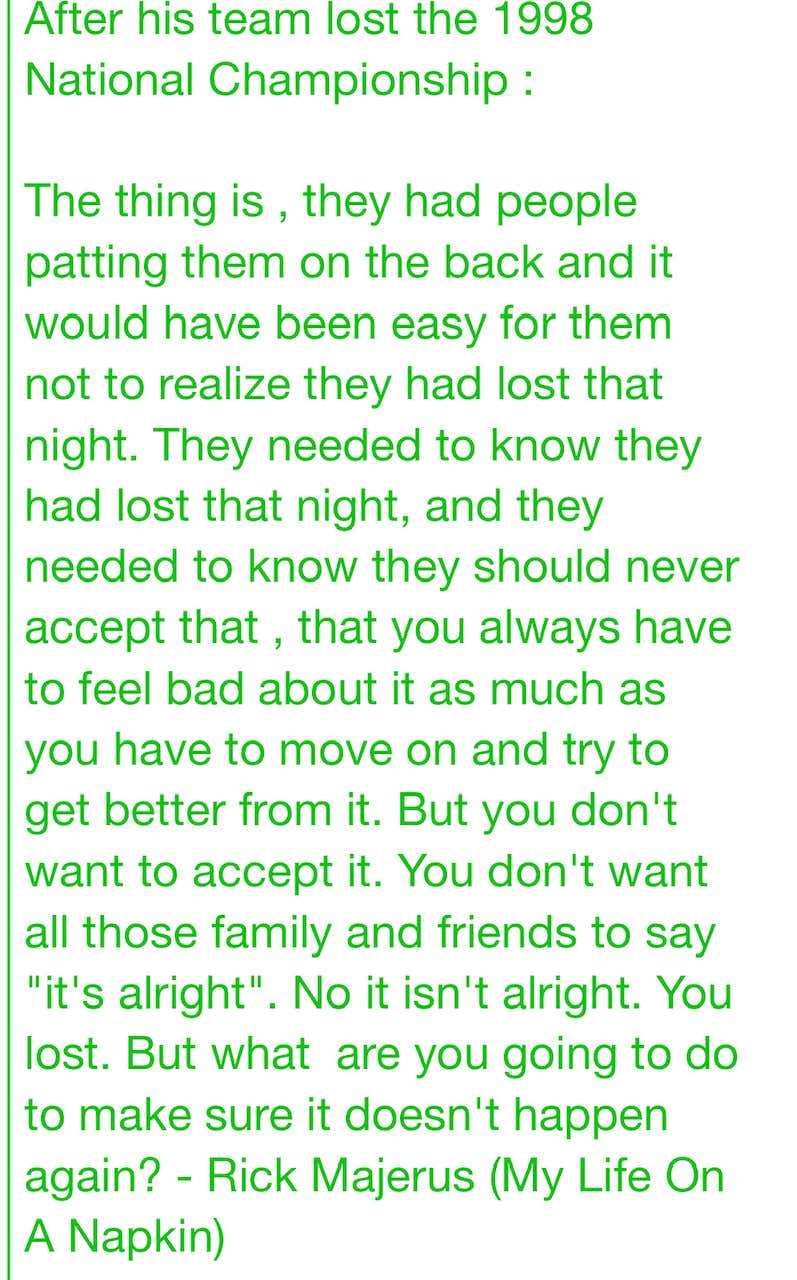 Beautiful quote by Rick Majerus, and a very similar action by Nick Saban. Both terrific reminders of why I love sports and what it can teach you about yourself.