I'm not saying that's what happened here, but it's what's captioned so I'm going to believe it. I'm also going to believe that dragging that guy across the bar was the best day of those bartenders' lives. Years of frustration dealing with drunk assholes finally released on one poor, unsuspecting, alcohol-soaked soul. It's almost as if they had practiced for it. At one point the guy with the mustache was holding his legs while the other guy punched him in the face... 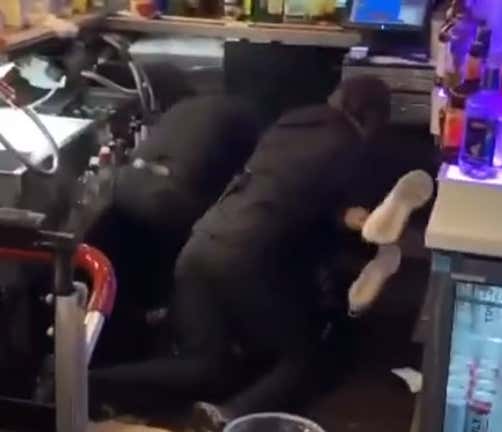 Thank god security showed up because they weren't stopping either. I think the reason why this video is so satisfying is because the bartender is an older guy. He's seen it all. He didn't get flustered or emotional. He didn't yell or go nuts. He simply took care of business. It wasn't his first dust up and it certainly won't be his last. Tomorrow he'll be right back behind the bar serving up gin and tonics to all the local scumbags like nothing happened. And that's the way it should be. It's not a glamours life, but it is an honorable one. So let this video serve as a reminder to everyone not to throw a drink at your bartender. Instead leave them a tip- they deserve it.