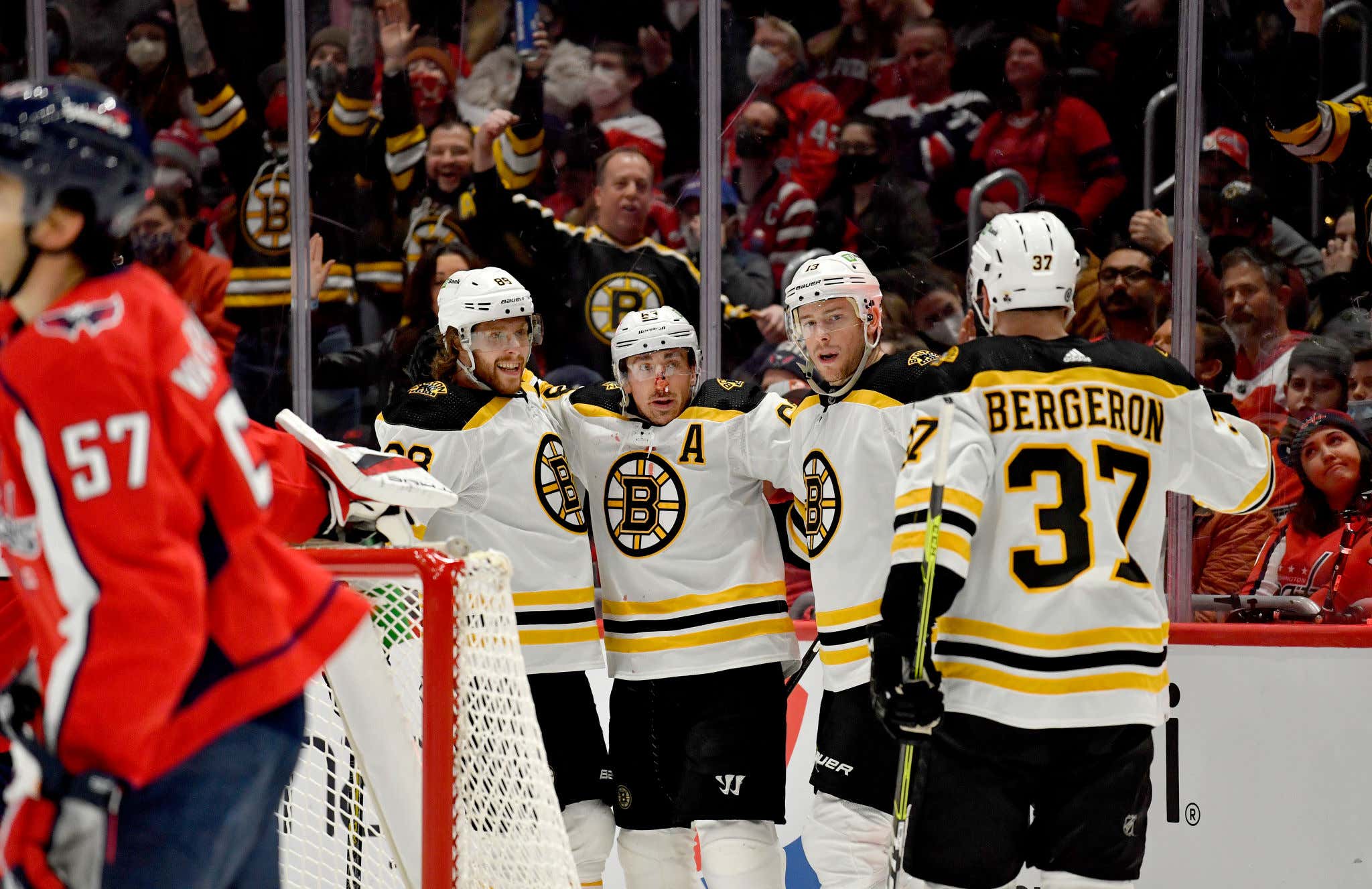 After dismantling Tampa Bay 5-2 on Saturday night, the Boston Bruins followed up with a 7-3 win in DC against the Caps. The 2022 Boston Bruins are absolutely rolling, let's get into it…

Conor Sheary opened the scoring 3 minutes into the game. Ugly goal for the B's to give up. Carlo and Ullmark both couldn't handle the puck off the boards, popped right out for Sheary. 1-0 Caps.

With 7:28 left in the 1st it was Conor Sheary once again, who was the beneficiary of a bad pass from Matt Grzelcyk. 2-0 Caps.

Late in the period, David Pastrnak got the Bruins on the board on a 5 on 3 power play. 2-1 Caps.

On the ensuing power play (and probably with a broken nose), Brad Marchand sniped to tie it up 2-2. Quite a period.

Early in the 2nd Matt Grzlecyk sniped to give the Bruins their first lead of the game. 3-2.

David Pastrnak buried his 2nd of the night to make it 5-2 Bruins.

Erik Haula with a snipe of his own. 6-2 Bruins.

TJ Oshie got the Caps on the board to stop the bleeding. 6-3 Bruins.

Brad Marchand batted in his 2nd of the night, 7-3 Bruins.

- Connor Clifton and Derek Forbort were added to COVID protocol and were out tonight. Urho Vaakanainen and John Moore drew in. No Nick Foligno (lower body), he'll be getting an MRI when B's return to Boston. Karson Kuhlman slid in.

- Charlie McAvoy returned to the lineup after a 2 game absence (lower body).

- David Pastrnak is HOT. Potted 2 against Tampa and did the same tonight in DC. Nice to see him start to gain some confidence and get rolling here in 2022. His 12th and 13th of the year, now has 5 goals in his last 4 games.

- Brad Marchand took a NASTY high stick in the 1st, came back and tied the game later in the period. Duality of a man. Can't keep him down. Finished the night with 2 goals and an assist. Demon.

- Good to see Matt Grzelcyk bounce back from his 1st period blunder with a goal and 4 apples. First career 5 point night. Not tooooo shabby.

- B's rattled off 6 unanswered goals after going down 0-2 in the 1st. Would've been easy to just roll over.

- Trent Frederic suffered an upper body injury in the 2nd and did not return.

- 2 more helpers once again for Taylor Hall tonight, who now has 6 points in his last 5 games and 11 points (2G, 9A) in his last 10 games. 2nd line starting to develop some chemistry. Erik Haula extended his point streak to 5 games with his goal tonight. 2nd line having a great start to the new year.

- Linus Ullmark got his 2nd straight start in net. Seemed shaky early but was really solid as the game went on. Finished the night with 27 saves. Now has 8 wins in his last 10 games.

B's head back home for a 3 game homestand. Habs on Wednesday night, Flyers on Thursday night and Nashville on Saturday afternoon.