That video above is a hype video for the East Midlands Derby between Nottingham Forest and Derby County. A rivalry that dates back to a time when the sun never set on the British Empire. Now, you might be asking "who the hell cares about a 2nd tier soccer game in the Midlands of England?"...well...I care, a lot. I have completely fallen in love with Nottingham Forest.

The FA Cup match against Arsenal was the most fun I have had rooting for one of my teams since the Cubs in 2016. It was incredible. Little NFFC getting mighting Arsenal at home. Nottingham Forest have not been in the Premier League in 22 years. They've fallen on hard times, but now they're on their way back and won their biggest match decades in front of their own fans. The type of upset that got this reaction from our in-house Arsenal fans

Nottingham Forest ruined Troopz's wedding and I couldn't be happier about that.

I love the EPL. I love soccer. The one thing holding me back as a fan was never truly having a team. Nothing ever felt right or natural the way it is with the teams you grow up with and get accustomed to being disappointed by. I tried to be a Newcastle fan because I loved Alan Sheerer. I tried being an Everton fan because they had Landon Donovan for minute. Ditto for Fulham with Dempsey. I tried to like Leeds because they have a kid who went to my high school on the team and that Amazon doc was pretty good. Nothing stuck. Not having a team you truly care about prevents you from having the emotional swings that make sports great. I never wanted to be a guy who just jumped on Man U, Man City, Liverpool, or Chelsea like Ryan Whitney did. Whit probably loves the Yankees, Lakers, and Cowboys too. I never wanted to be one of those guys that started on 3rd base with a team. The best part of being a sports fan is the journey. It's the climb. You need bad times to be able to appreciate the good. And there's something that never sat right about being a fan of a team that might finish 3rd in the table so they go out and buy the solutions to their problems with 100 million dollar transfers. Every sports fan in America outside of NYC rolls their eyes at the Yankee fans of the world because they believe that Yankees entitled to every free agent and they can just buy happiness and success. Then when it comes to picking an EPL team all those people who roll their eyes at Yankee fans throw all those feelings out the window and choose a Yankees equivalent across the pond. If that is you and you feel no guilt about that, then more power to you. I have never been comfortable with that so I wandered the desert for the last 20+ years looking for the right team for me.

Then…my brother got a job with Nottingham Forest. Naturally, I want my brother to have success and the team winning is part of that so I started rooting, watching, buying merch, and slowly falling in love with a team that I barely knew existed a few years ago. This team is, as they say in Nottingham, magic. It has everything you could ever want. A great logo/uniform 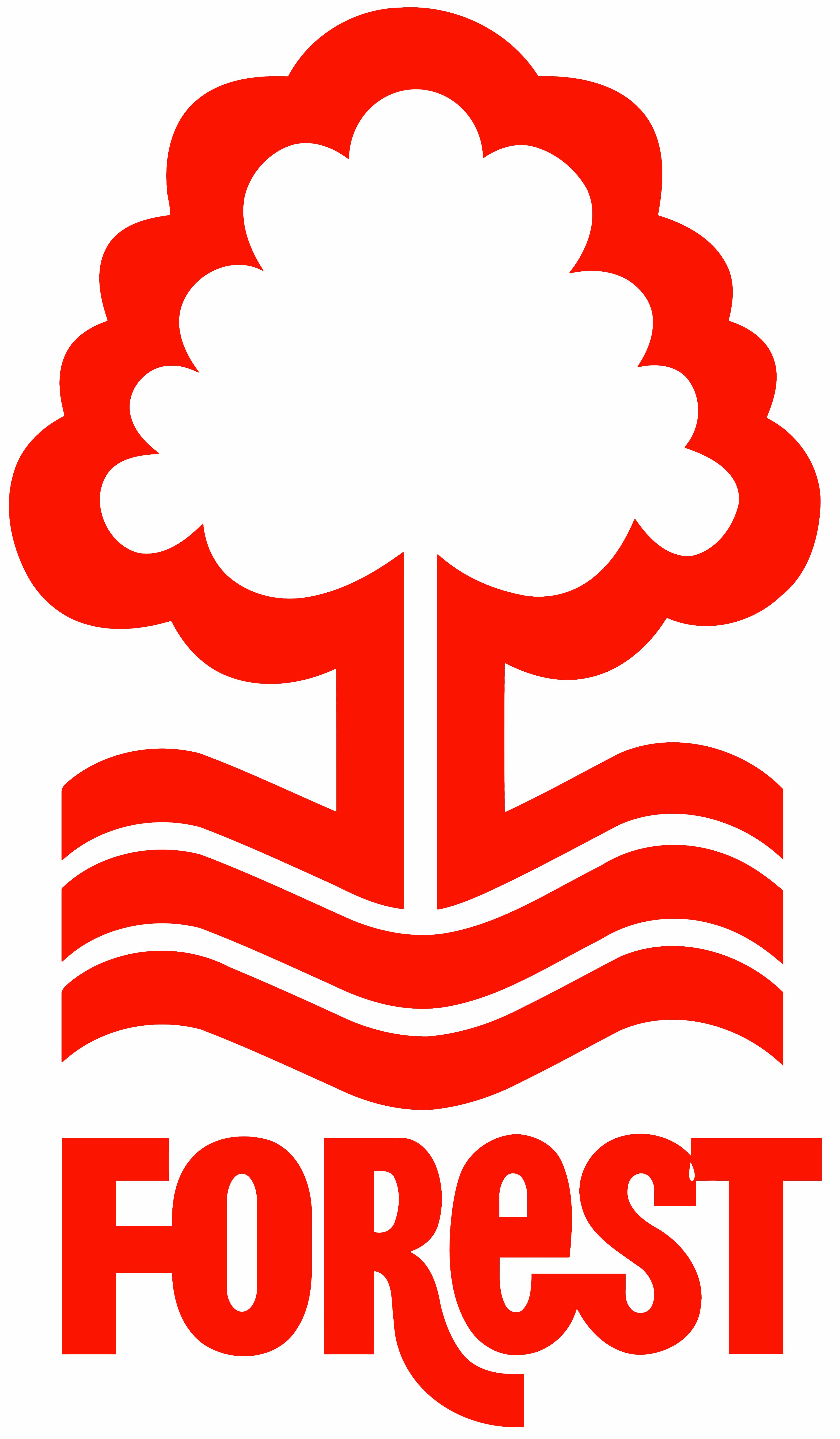 A RICH history. Nottingham Forest is one of the oldest football clubs in all of England. Founded in 1865 right about the time that Honest Abe Lincoln was going to the theatre.

They've won two European Championships which they let Arsenal know about in a BIG way.

An old stadium that looks like the English equivalent of Wrigley. Nestled up against the River Trent and near neighborhood in what is largely a blue collar kind of town.

Kind of how the SEC says it just matters more in the South…well soccer/football matters more when you get outside of London. These are people who will pay full price just to show up to the stadium to scream and sing about firing their own manager. They pay because they care. And this is a team that hasn't been in the Premier League in this century. Sent down in 1999, but for the first time in a long time this group has a real chance at going up. 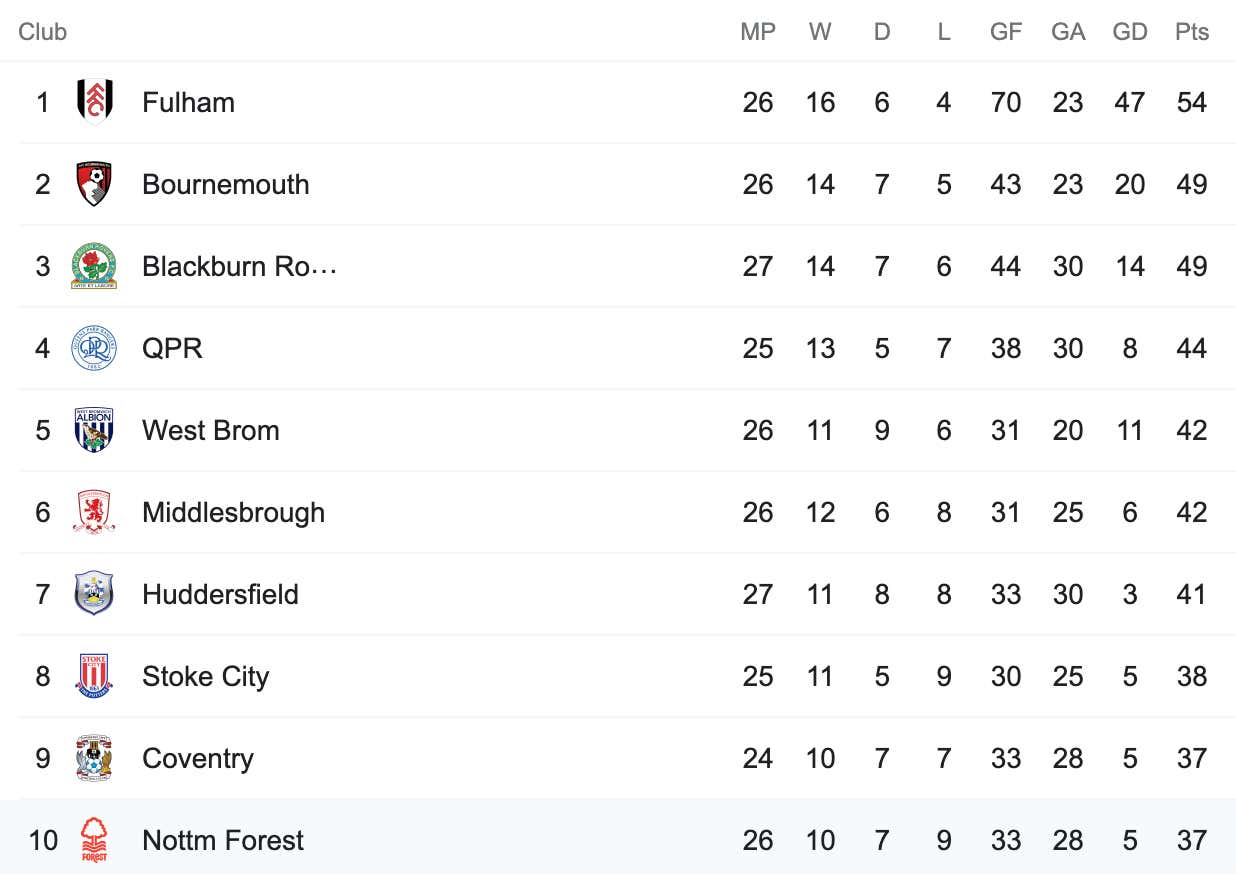 Sure, Forest are currently sitting 10th, but this division has a playoff for the final promotion slot. The top 2 get automatic promotion. 3-6 have a playoff. NFFC is 5 points out of that spot and they would probably be right there for promotion if they didn't start the year with a shit manager who led them to a 1-1-7 start. He was fired and we got ourselves a new King.

Steve Cooper looks like the creators of Family Guy drew a stereotypical English person and it is impossible not to love this guy. He looks exactly how I'd want a English Football club manager to look and he gets results. I look at his face and I laugh, I look at the table and I smile. I watch him go to the crowd after a game and I get chills.

There's a buzz around the club since Cooper took over. Forest have the most points in the league since Coop became the skipper and he's getting production out of young and old.

The young…Brennan Johnson. 20 years-old. Product of Nottingham. His dad played for NFFC too. His name was floated around at the beginning of the month when the transfer window opened and his response…

He can't leave because he's one of their own

What a great fucking chant for a hometown guy. I wish I would've known about this when Ryan Hartman was playing for the Blackhawks. I'd be in the aisle like the dude who used to dance to shipping up to Boston (which was always weird to me, but that is a story for a different time) getting everyone in the section to sing the same song about Hartz whenever he scored. Speaking of songs…

This blog is over 1000 words now, if you've come this far maybe you'll come just a little bit further. Tomorrow morning on ESPN+ Nottingham Forest will play their arch rival, possibly for the last time in a while as NFFC might be going up to the Prem, and County are in relegation danger. You should be there. Nottingham Forest is a special team. It matters more to those people. They've got everything. History, traditions, a great guy in charge, lovable players, the logo, and in 2021-22 they have a great story and a real chance. Get up tomorrow and fall in love forever. There's only a few months left in the season and I can't imagine there is a better feeling in sports than going up to the Premier League. You can get in on the ground floor with a club that is magic. You don't have to sell your soul and be a fan of some giant team with huge Russian Oligarch money behind it. Forest can be everything you want because they have all you need. You REDS